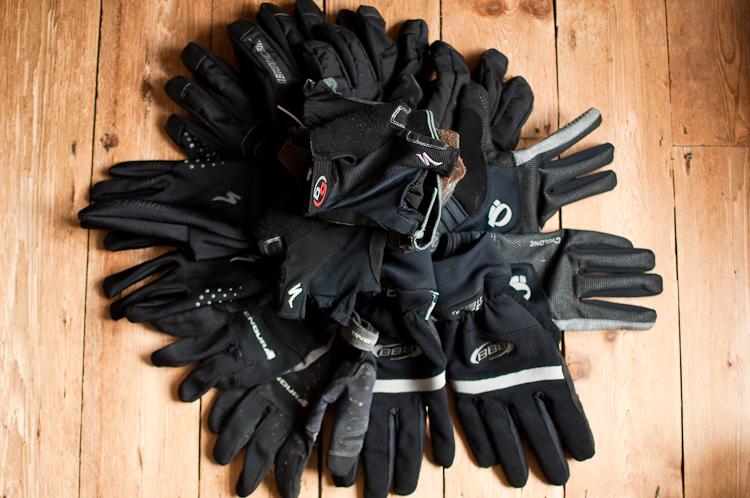 My search for the perfect winter cycling glove is on the point of driving me round the bend in numb-fingered frustration. I can’t decide whether I’m being overly fussy or just plain unlucky but I’m far from satisfied, despite now owning more pairs of gloves than Imelda Marcos had shoes.

In my MTB days life was less complicated; I made do with my old BBB Aquashields. They were a bit of an effort to get on and off, especially when my hands were wet, and the lining had a tendency to turn itself inside out, but they were warm enough and didn’t mind a bit of a soaking. But when I tried them on drop handlebars they quickly became uncomfortable – I think because they’re a tiny bit too small for my hands, so when I’m on the hoods there’s a constant strain on my thumbs in particular and eventually my hands start cramping.

So I turned to a pair of Endura Full Montys, which fit like the proverbial glove and gave me much better fine control of brakes and gears. But when the temperature dips below about 10℃ my fingers start getting really cold – I think I have pretty poor circulation to my hands and feet and once they get cold they stay that way and I get very miserable very quickly. To be fair, the Full Montys aren’t supposed to be particularly warm.

So I bought a pair of Pearl Izumi Cyclones. The labelling suggested they’d be good for anything other than the very coldest conditions and they let me retain that all-important fine control thanks to a reasonably close but very comfortable fit. When I went out for my first ride in them it was very cold – around freezing – and at first I thought I’d cracked it. They didn’t seem to be letting any cold in and my fingers were nice and comfortable. But then they started getting colder and colder, until eventually I was cycling with my hands wedged into my armpits because my fingers were in such agony. Hoping this was just because of the extreme cold I wore them again the following week when the temperature was somewhere between 5℃ and 10℃, but before long the same thing was happening. I reckon they’re spring and autumn gloves and the bloke I complained to at Pearl Izumi agreed with me – which begs the question why the labelling indicates they’d be fine for cold weather. That’s about when the Pearl Izumi bloke went quiet. Grrr.

I figured it was time to stop messing about and get some proper winter gloves that would mean a sacrifice in fine control but at least I’d have warm hands. I opted for a pair of Specialized Sub Zeroes, a double-layered glove with a light fleece inner and a tough weatherproof outer. Again I thought I’d cracked it at first – my hands were toasty and dry, despite it being below 10℃ and drizzling pretty much constantly. But then, slowly but surely, the outers got soaked through, then the inners got wet, then it was just a matter of time before my hands started getting cold and numb. It was a long ride – over five hours – and the rain didn’t stop from start to finish, but I reckon if a glove’s sold as waterproof it shouldn’t matter how long you wear them or what the weather’s like. I said as much to Specialized via their website feedback thingy but they’ve chosen that tried and tested customer service technique of keeping schtum, presumably in the hope that I’ll go away and stop bothering them. And I will – I won’t be bothering them at all any more with any of my troublesome custom.

So now I have a monstrous collection of gloves - at considerable cost too - but if it’s cold and raining outside I still don’t have any to wear. My wife has suggested using a pair of wetsuit gloves under the Specialized outers, which I might try, or covering my hands with goose fat before putting any gloves on, which I probably won’t try.