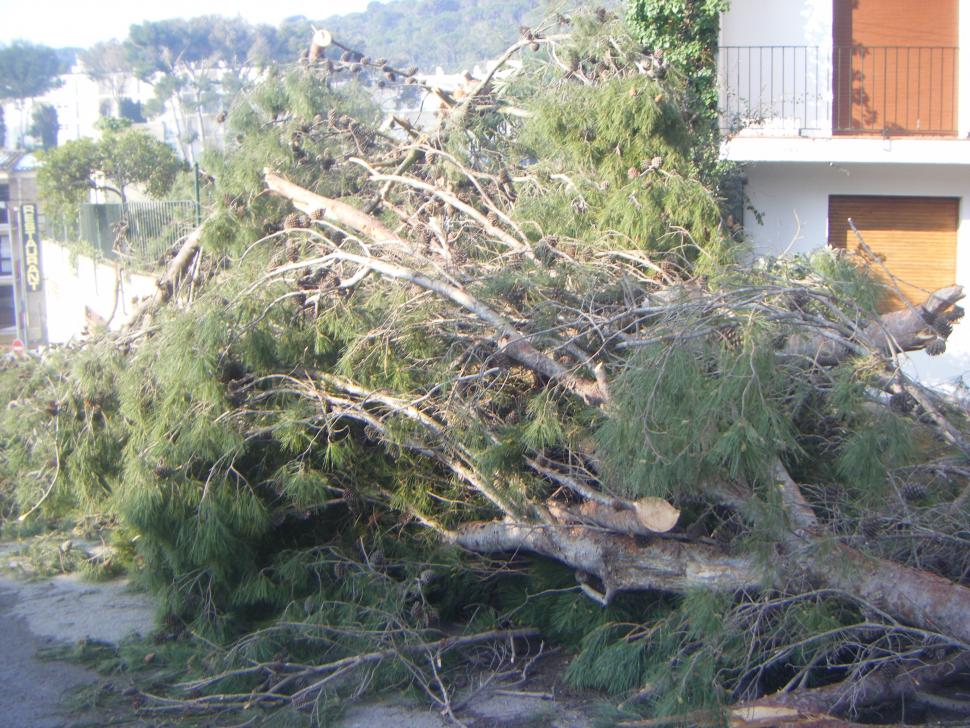 Apart from the stunning performance of Albert Timmer getting in a break in Paris-Nice the end of last week and weekends highlight was me bagging my first big climb since Kirkstone Pass in 1994.

Els Angels is shortish at only 6 miles but it is steep and averages 8% for the final 4 miles easily.

The piles of snow at the side of the road added a surreal touch as did the Garmin pro from nearby Girona who just seemed to be going up and down the mountain all morning... considerably quicker than me.

It does give you an idea of relative performance when a guy cruises by on the tops of his bars humming along to his I-Pod.

After the bad weather and piles of snow and storm damage (see picture), we were just delighted to get any miles in.

After driving all day Friday it was nice to get down the coast road on Saturday following the Polish Mroz team. 15 or so riders hurtling down the small climbs into hairpins with sheer drops of 200 feet at the side of you was a test... especially as my tyre had blown off the rim on one of the earlier peaks.

Coffee on the sea front in Tossa de Mar was followed by a harder effort back along the coast.

It was Sunday that the ride to Els Angels was planned and despite some mechanicals in the group it was a great ride.

So in the space of less than a year I have ridden round a crit circuit in the centre of my home town and taken in a proper continental mountain. That's two ambitions off my list now.

I can see why people get addicted to "Peak bagging", I want to ride up some more hills now.... must have blanked out the pain quicker than I thought!!!

1
Cyclist says he was refused service at Costa Coffee drive-through – due to company policy “not to serve people on bikes”
2
“How would you like to be on camera now?” Shirtless driver accosts CyclingMikey
3
Near Miss of the Day 790: Taxi driver makes punishment pass
4
Hit-and-run driver who left cyclist “for dead” has prison sentence overturned
5
Toe strap-gate: Trump mocks Biden bike fall with spoof golf video
6
CeramicSpeed OSPW Aero officially launches with a €739 price tag
7
London to Brighton gridlock after traffic blocked event cycle lane — British Heart Foundation insists charity ride had "positive feedback"
8
Near Miss of the Day 788: British Transport Police apologises for "lapse in judgement" from impatient officer