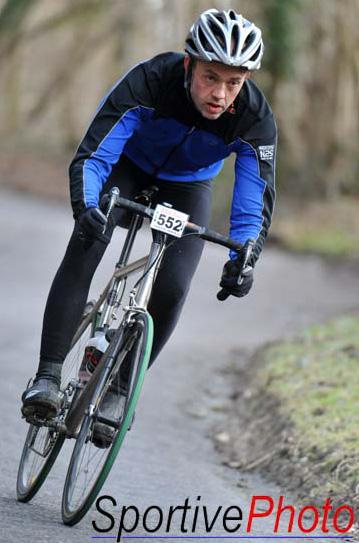 Today I completed the Burgess Hill Springtime Classic, a 71 mile sportive ride that takes in one or two hills more than it strictly needs to if you ask me – particularly as it saves most of the really nasty ones up until the last 15 miles or so.

This was my first sportive and it was a great ride despite those darned hills, one of which – a short sharp beast called Cobbs Lane - is apparently a 23% incline. It looked even worse. I rounded a corner at 57 miles to be confronted by my first glimpse of Cobbs Lane – just as the sun came out and hit the wet road, dazzling me with this fearsome wall of a hill. The surface was slippery too, so each desperate, gasping pedal stroke stood as much chance of lurching me into a sliding panic as it did of inching me further up the hill. The only thing that stopped me walking was obstinate pride.

Anyway, enough of the manly hill talk. The ride was supremely well organised by SRS Events who deserve much kudos for getting more than 500 riders away on time, fed, watered and generally very well looked after throughout. The signing was spot on, the stewards well placed and helpful and the flapjacks at the refuelling stop delicious. Back at the finish there were even massages to be had if you felt so inclined – fantastic.

I finished in 4hrs 39mins, which put me a tantalising four minutes outside the gold time band for my age group. Ah well, I can console myself with the thought that my time without taking into account that flapjack stop was 4hrs 29mins, bringing me under that inexplicably important 4:30 mark.

I came home feeling rather pleased with myself, a feeling that soon evaporated when I added the mileage to my training diary. This week I was supposed to have covered 195 miles, with one ride of 120 miles. The reality was a total of 125 miles, with today’s 71-miler as the longest. That’s the sixth consecutive week I’ve fallen behind my target – not good.

In a bid to improve on this I’ve rather belatedly joined the road.cc Metric Century Challenge. Theoretically I should be adding rides to that several times a week, but something tells me that the current leader, peter s, hasn’t got too much to worry about…

Update - I've just uploaded a picture of me taken at the event by Phil O'Connor of Sportive Photo. There are many more on his website.