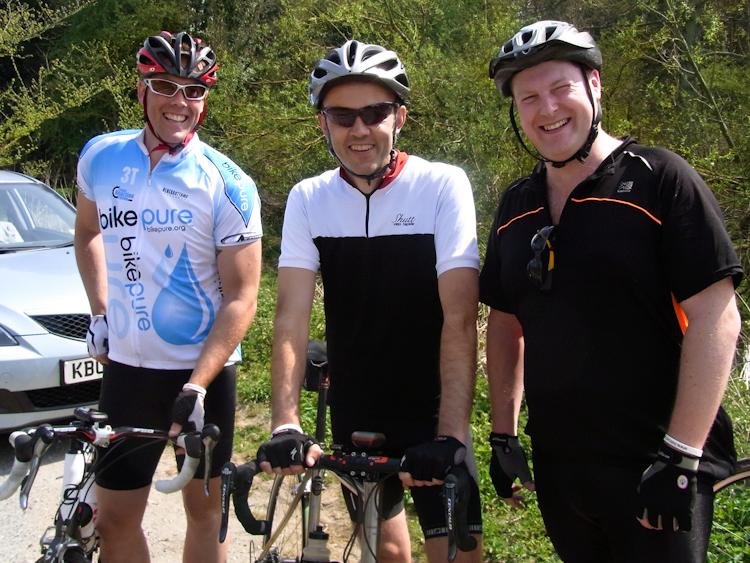 After a brief hiatus caused by a fund-raising party and a bad back (the two are not unconnected, but that’s another story), this weekend I was back in the saddle with a vengeance: 108 glorious miles on Saturday and 64 rather harder ones on Sunday.

Saturday’s ride was the second with fellow TRAT riders – just three of us this time – and it raised the thorny issue of how to keep everyone happy when the riders involved are at different fitness levels.

Matt and I were lucky enough to have found the time to build up a decent level of base fitness over the winter and we’re now building on that base to move into uncharted territory (for me anyway). But Mark hasn’t been so lucky thanks to work and family commitments and he’s clearly got a long way to go. His difficulties were compounded by the fact that he rides a hybrid – a perfectly nice one, but it’s still considerably lardier than either of the other bikes on Saturday’s ride.

This combination of heavy bike and lack of big-ride fitness could have caused real problems so it’s to Mark’s great credit that he did as well as he did. It was only really on the hills that he found it impossible to maintain the pace, but every time a big hill loomed he was reduced to a crawl. There but for the grace of ill-disciplined self-employment go I, I thought as I watched Mark labouring away.

We were always going to stick together because the whole point of the group rides is to get to know each other and get used to riding in a group. On a more pragmatic and perhaps slightly less noble note, we also had to ride together because Mark didn’t know the route.

So whenever we hit a significant slope Matt and I had to choose between cycling at an artificially slow pace or going ahead and then waiting for Mark to catch up. We tried both, but both had their downsides – we both found that cycling slowly actually causes more aches and pains, rather like the backache that comes from walking artificially slowly for too long. But going ahead and waiting was also less than ideal because the momentum was lost, the muscles cooled and restarting got progressively harder.

Mark clearly felt wretched about holding things up and, speaking as one who has held up plenty of rides in his time, I could completely relate to his frustration and discomfort every time he apologised or assured us it would be okay if we went on ahead.

In the grand scheme of things, of course, the delays were insignificant and did nothing to detract from what was a glorious ride through some beautiful countryside on a perfect spring day. What really got me thinking was the possibility that there may be significant fitness discrepancies on the actual LEJOG. I’m still not quite sure how many people will be on the team but it could be as many as 15. What are the chances of all 15 riders being matched closely enough for it not to be an issue?