Old banana on the skids… Bath is full of old relics from another age, me, Dave, lots of Georgian stuff, and the Roman baths, but just down the street from the road.cc office is this poignant reminder of a byegone era… 1990 or thereabouts.

I've walked past the Banana Falcon numerous times in the last few months slowing to take more of a look, but only this week did I realise that it hasn't moved at all – famed for my observational powers me.

I just assumed that someone who gets up earlier than I do always locked the Banana in the same place, but no, the rusting rims and the slowly unravelling bar tape finally helped the penny drop. 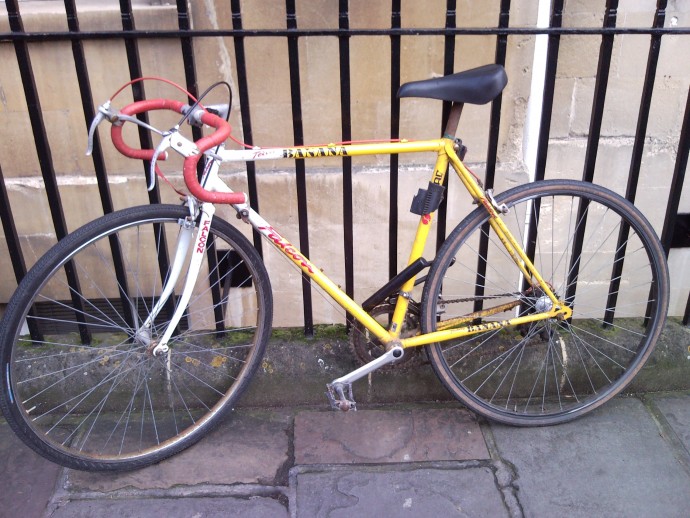 What a shame because until recently it looks like someone did take care of it – in these throway times 20 year old bikes don't last long unless they are loved, bikes half that age routinely end up down at the dump.

Another odd thing too – it's chained to the railings on what is probably one of the most expensive streets in Britain and nobody seems to have noticed, maybe they all assumed like me that it belonged to an eccentric millionaire with a thing about British professional racing teams of the Eighties and the wannabe team bikes they were set up to help sell.

Anyone like to give it a good home? If you would, (and we can make sure it doesn't belong to an eccentric millionaire - the lock doesn't look that rusty) maybe we can mount a rescue mission.