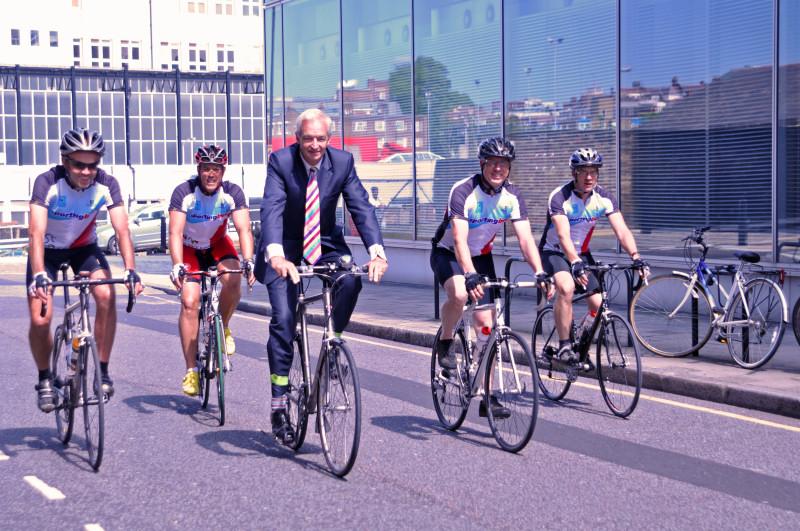 Just four days to go now until we set off for the big TRAT adventure and I’m finding it increasingly tricky to think or talk about anything other than this blessed bike ride – to my wife’s ongoing amusement.

Last week a few of us met ride patron and Channel 4 news legend Jon Snow, who is as nice as he appears to be on the telly – very nice indeed in other words. We discussed titanium tubing and the importance of matching ones socks with ones tie and then some photos were taken, one of which was of just me and him, arms casually draped around each other’s shoulders like old mates. I might have to get that one framed…

Given that this is National Bike Week and the summer seems to be underway I suppose it’s mildly ironic that I’ll be cycling almost no training miles, bar a few gentle leg looseners, until it’s time to head for Cornwall on Saturday. It feels weird not being on the bike every day. Give or take a mile or two, I’ve done 3,393 training miles since the start of January, which equates to a weekly average of about 135 miles. Just one of those weeks contained no cycling at all while a few others nudged the 300-mile mark. I feel as fit as I did 25 years ago. This has already been a fantastic experience that’s made me reassess what I’m capable of – and I haven’t even started the ride yet!

This week it’s all about packing and repacking bags and trying not to over-fettle the bike, which really needs nothing done to it at all. On Saturday the adventure begins ludicrously early, when I take bike, bags and self to Brighton station in time to catch the 0649 to Watford Junction. At Watford I’ll be picked up by a passing minibus, in which I’ll sit with eight other overexcited cyclists all day as we make our way to Land’s End.

On Sunday it’s reasonable to expect a bit of a surge in my metric century challenge entries as the fun really starts. We’ll be on the road by 7 that day after what I imagine will be a hearty breakfast that’ll hopefully include porridge. With a light breeze at our backs we’ll cycle off into the warm summer’s morning (positive thinking…that’s what it’s all about) until we reach our first lunch break, at Launceston Rugby Club 81 miles on. Then it’s back on the bikes to the overnight stop in Taunton, 73 miles later. And so on for six days.

Each evening I’ll try to find the time between eating loads and collapsing into an unfamiliar bed to write an update for this blog – hopefully with photos too, technology permitting. If you’re curious about where those updates are coming from, the full route, complete with lunch and overnight stops, is on Bikemap.net.

Any road.cc readers suddenly overwhelmed by an irresistible urge to donate to the cause are invited to visit my Virgin Money Giving page, which will be open until at least the end of August. Thanks to the organisers securing a corporate sponsor for our ride, every penny we raise is going to help the Bishop Simeon Trust counter the devastating effects of HIV/AIDS in South Africa.