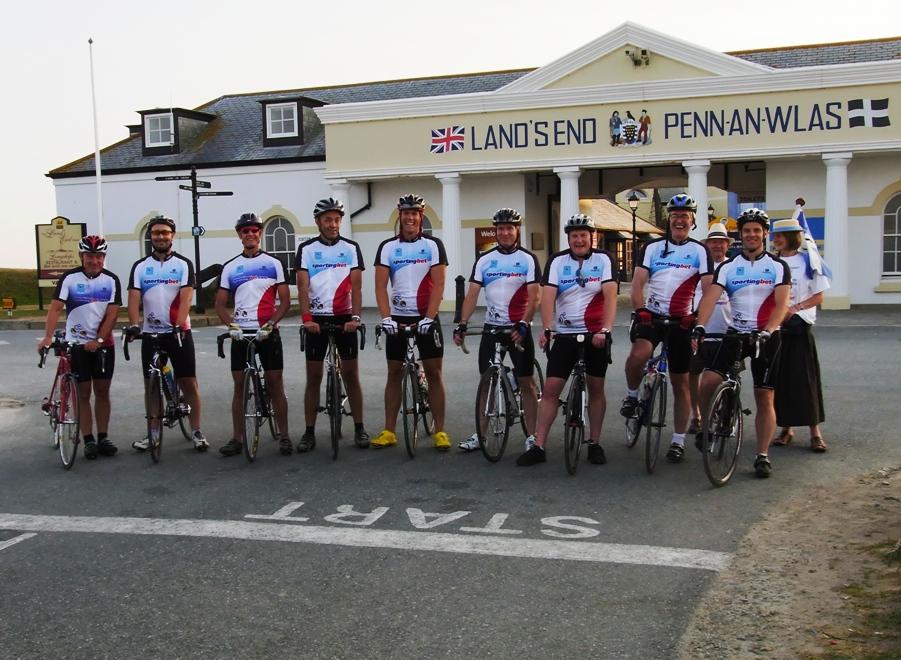 I’m writing this in a small study-bedroom in a student hall of residence in Taunton with just one bar of mobile internet coverage with which to share it. It’s 9.20pm and we’ve been here for a couple of hours now, following our 157-mile ride from Land’s End that started at 6.30 this morning.

If I’d been asked to describe the perfect opening day for the TRAT ride I probably would have included the following elements: day-long sunshine and warm temperatures, a moderate tailwind to help us on our way, no dramas, accidents or distracting mishaps of any other sort, enormous quantities of delicious food and drink dispensed at regular intervals, and unending encouragement from all quarters. Well I guess this was my lucky day because that’s exactly what we got.

But I’m getting ahead of myself. My last blog post ended with some disquiet over the prospect of getting all my stuff to Watford Junction without breaking my back.

Thanks to the input of a rather sad – but dearly cherished – friend, I had discovered a blog about which platforms at Clapham Junction are used for every destination served by that station. Impressive eh? Yes I thought so too.

So I knew I’d need to get from platform 12 to platform 16 and I knew roughly which part of the train I’d need to be in to stand a chance of making it in time. I had eight minutes but you know how it is…somehow the arriving train always manages to be a bit late while the departing train always leaves precisely on its allotted second. And so it proved on this occasion – by the time I arrived I had just three minutes to carry out my tricky manoeuvre.

I’d psyched myself up for an explosive physical effort so the second those doors opened I was out of them like a shot, rucksack on back, bike bag slung around my neck, clothes bag swinging from my right shoulder, Mule Bar bag in right hand, and bike in left hand. Such was the adrenaline rush that I barely felt the pain as I descended the stairs. But it kicked in as I climbed the second flight and jogged along the platform to the right part of my connecting train. And by the time I was safely on board my shoulders, neck and back were all screaming blue murder at me. But I didn’t care – I’d made it.

If I carry on like this we’ll be here all night. Suffice to say I met up with The Race Against Time team at Watford (more about them and my fellow riders in my next post) and we then spent the best part of the day picking up other riders and making our way down to Cornwall. I can’t remember what time it was when we arrived at the Youth Hostel in St Just, six miles from Land’s End but I’d guess around 6.

It’s a beautiful spot, St Just. I’d like to go back one day to explore the area properly but we had to make do with a quick bike ride down to Land’s End in our TRAT kit for some photos (including the one above, if I’ve managed to upload it), before heading back for an early night. We were sharing Youth Hostel style dorm rooms, each containing three tiny little bunk beds. So there were six big blokes in that stuffy room last night, all as nervous as each other about the following day. Those nerves manifested themselves as much semi-hysterical banter, giggling and, I’m sorry to say, the breaking of wind. None of us got a particularly good night’s sleep.

At around five we were stirring, transferring various items from bag to bag and then back again in our nervous confusion as we prepared for the day ahead. There was porridge, toast and coffee at 5.30 and then we were off at 6, down to Land’s End again for our official start at 6.30.

It was the perfect morning. The sun was up but not yet hot and the breeze was warm and blowing in exactly the right direction. We paused momentarily on the line, reflecting on the enormity of what lay ahead and then, before we got too freaked out by that, the cap gun was fired and we were off.

It was a beautiful ride. We started on what were little more than country lanes cutting through the gorgeous Cornish countryside, enjoying the huge release of tension there’d been as soon as we actually started pushing those pedals. The roads slowly grew in status until we hit the A30, which we followed for most of the day. Thanks to that tailwind we made good progress too, clipping along at a decent pace all morning. Every few miles we’d see one of the support vehicles in a lay-by. Sometimes we’d stop for a few minutes, to top up the water bottles and scoff delicious home-made flapjacks, sometimes we’d just pass by with a wave.

And so it went on all day. The sun beat down – never feeling too hot thanks to that breeze – and those nine sets of cranks just kept turning. By 1-ish we’d covered 80-odd miles and had reached Launceston Rugby Club, where we stopped for lunch. By 5 or thereabouts we’d got to Exeter, where we had our only navigational wobble of the day, circling the city centre for a bit while we looked for the A38 to Taunton. We asked a passing cyclist for directions and he said, “Well I can tell you but it’s an awfully long ride…” That’s okay mate, I think we can cope, we all thought, manfully.

The final 10-15 miles felt like twice that, as usual, but we found Taunton eventually and have been wandering around in a bit of a daze ever since, trying to figure out exactly what the impact of this epic ride has been on the bodies so far (remarkably light, all things considered) and how those bodies are likely to respond when asked to do it all over again tomorrow. I guess we’ll find out on that score in about eight hours’ time…

Until tomorrow then (provided I have the energy and connectivity)…