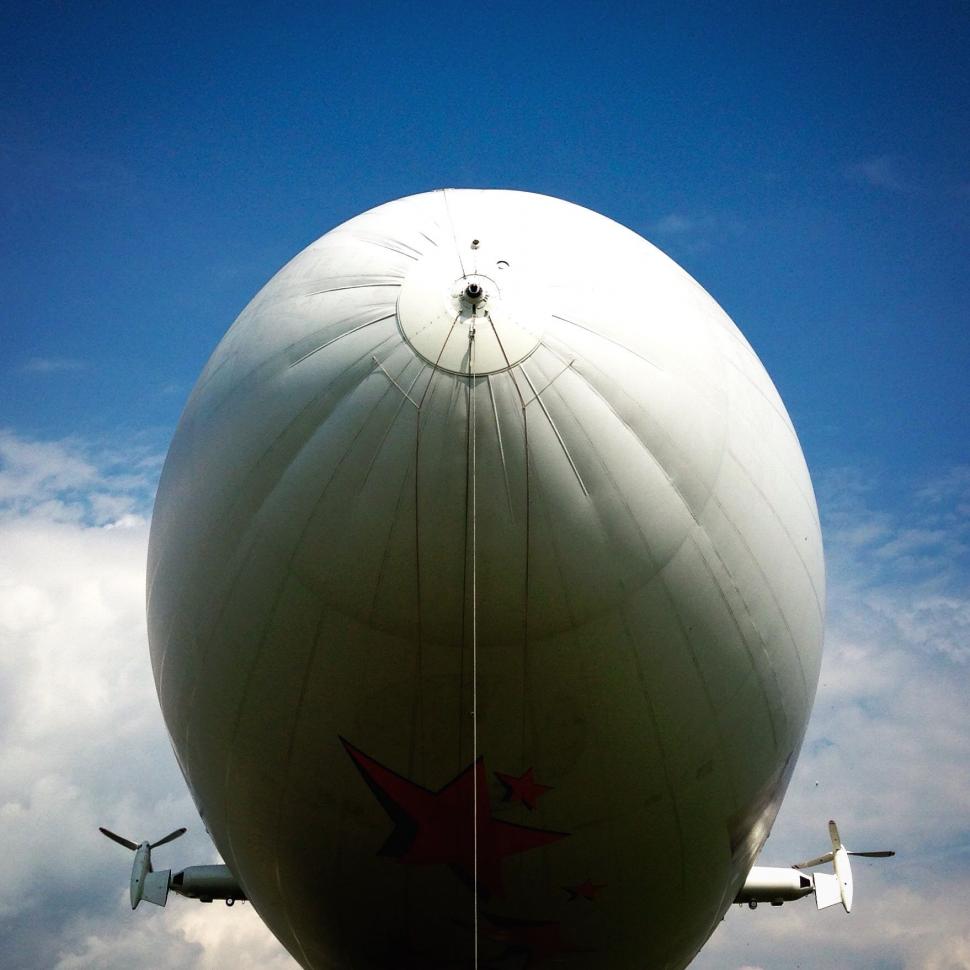 Ashmei Airship - Big Nose.jpg
Having a go in an airship thanks to Ashmei

There are many ways to gain attention for your brand at Eurobike and try to break through the jaded, cynical and tired patina of the hall trudging industry throng and guarantee some column inches. Stickers and t-shirts don’t quite cut it, although the latter are always handy and can have quite a high kudos value if are something of a limited run. As do socks, good currency are socks. Easy Instagram like-fodder. A special edition version of whatever product you’re pedaling also works quite well. It needs to come in a swanky box though. Wood, embossed. The tried-and-tested couple of dolly-birds in tight lycra will get you lots of mentions for all the wrong reasons these days and is likely to backfire in terms of sales, securing a famous cycling type for a short while will work somewhat better, especially if they can do hops and tricks and stuff. Sometimes the simplest things like decent coffee and beer work remarkably well at sucking people towards your stand, or mojitos.

Clothing brand Ashmei probably thought through all of these in their pre-Eurobike brain-storming marketing meeting and figured none of them were quite what they were after and they needed something different, something special to launch their new range of cycle clothing that would really storytell their brand visibility to a broader event horizon. Or something. Think outside the bike-box boys.

How about a Zeppelin? Has anyone ever done a trip in a Zeppelin before? No? Let’s do that then. What does an airship have to do with cycling? Absolutely nothing, but who cares, it’s a trip in a freakin Zeppelin. Awesome.

There is method in this madness, just. Eurobike is based in a vast series of halls alongside an airfield just outside Friedrichshafen in southern Germany, and that airfield has a massive airship hanger looming in it, it’s used as an overspill hall for the bike show. Friedrichshafen is the birthplace of the Zeppelin, it’s where the Luftschiffbau Zeppelin company had their manufacturing base in the first part of the 20th century as they became world leaders in the design and manufacture of airships, they diversified into V-2 Rockets for a bit but we’ll gloss over that. If you’re visiting Eurobike the skies above will be frequently hummed by engines as of one of the pair of Zeppelins that operate from the airport skuds overhead.

And so half a dozen journos and industry types from all over Europe are cat-herded by Stuart and the kind folks from Ashmei into the Zeppelin departure hall, given bone-fide plane tickets and run through a familiar pre-flight safety briefing with a few airship specific extras. Escaping from a crashing ball of flame isn’t mentioned although everyone’s thinking it, probably. Modern airships tend to float on less volatile helium these days. Then we are crocodiled to a bus that ferries us to the middle of the airfield where we politely wait in twos on the vast empty space of grass. 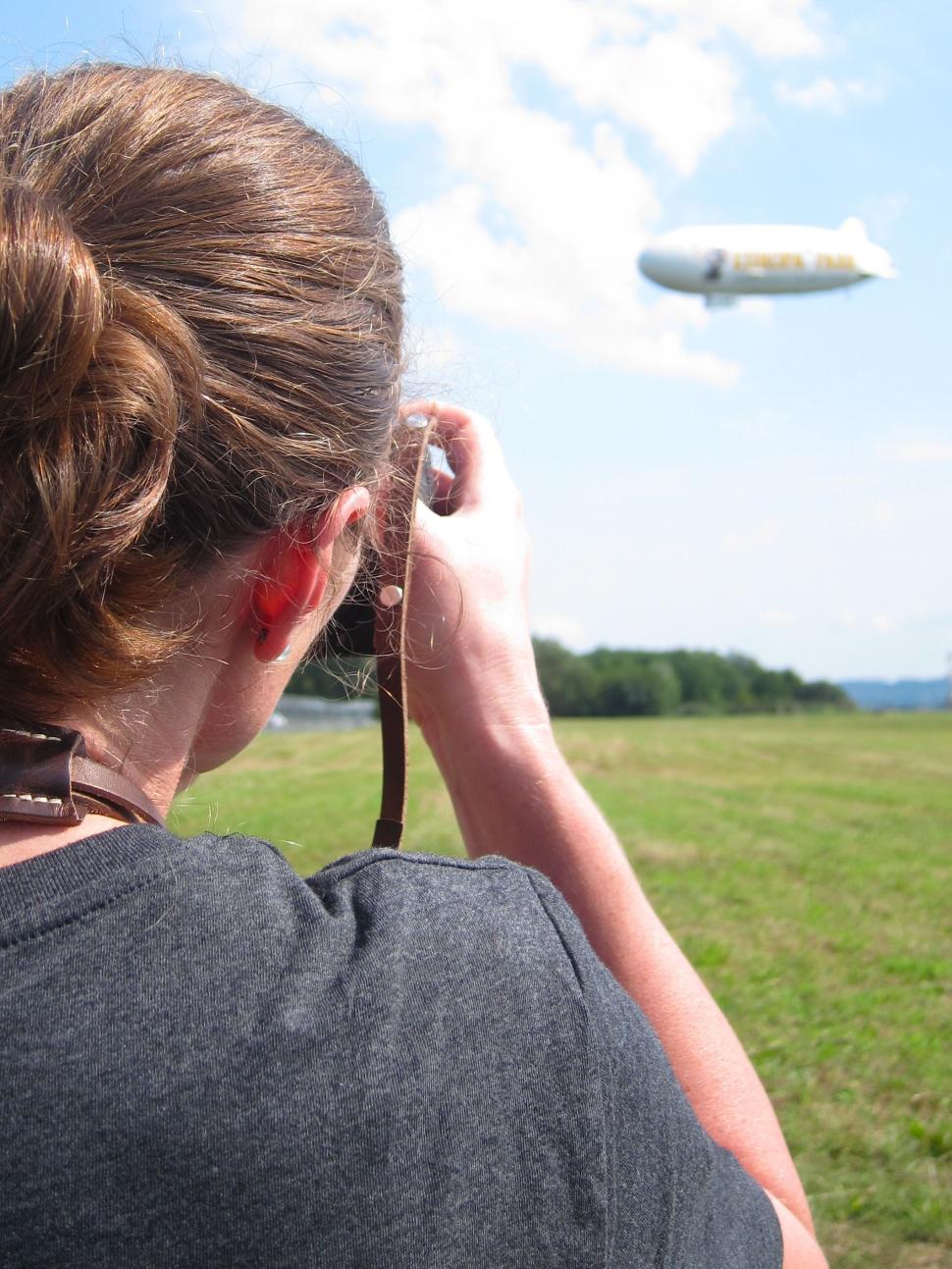 Despite being frequent symbols of an exciting future over the last century or so airships have never really, um, taken off. Potentially efficient machines in that they don’t need big thirsty engines to thrust an aircraft wing through the air to provide lift as much of that job is taken on by a large sausage of lifting gas the propellers either side can be small, frugal and quiet, while they had a brief moment in the sun they have never been able to compete with modern aircraft. They’re slow, rendered useless by bad weather and slaves to the wind, and are unsuitably large in proportion to what they can carry. And probably more importantly than all of this airships have a bit of an image problem, there’s one particular picture that comes to mind as soon as you mention the word ‘airship’ or ‘Zeppelin’ to anyone. Although it was almost 80 years ago it shows no signs of shifting. But for all of this they still have a tinge of romance to them, and while they’ve been around since before the invention of the airplane and not uncommon in the skies in the past not many people these days have had a go in one. It’s exciting.

I’m bloody excited. The Zeppelin looms into our airspace and the nose creeps towards us filling the blue of the sky with white airship. There is that tingle inside you get from being this close to a flying machine, well, I do. I have flight in my history and quite like planes and flying things a bit. My inner child is getting uncontrollably jiggly and maybe does a wee, just a little one. The Zeppelin won’t actually land or be rigidly fixed to the ground when it comes to a stop, it will just be kept roughly in place by a man holding a rope from the nose, so we have to be prepared to move around in relation to the floating white whale if the wind nudges it around when queuing to board, and we need to embark in pairs as previous passengers come off in similar pairs to keep the whole dirigible in trim. Skip up the clanky lightweight alloy ladder and seatbelts on we take off. But for the high buzz of engines it is remarkably silent compared to the expected noise of a jet engine in such a situation and free from the punch needed to get a normal airplane off the deck it’s amazingly sensation free, the only real sign that we’re leaving ground is our shadow shrinking beneath us. We cross over the choked sheds of Eurobike and veer out west over Friedrichshafen which is suddenly obviously a very green and sprawling town and head out over the orchard patched countryside before turning left and back home over Lake Constance in a half hour trip. Technically there are only four Zeppelins in the world; everything else is just an airship. It’s a Hoover/vacuum cleaner thing really, and to further muddy the waters the Zeppelin NT we’re in is a semi-rigid dirigible, which isn’t a Zeppelin in the traditional sense, which were rigid machines where the envelope is supported by a framework rather than being kept in shape by the lifting gas. 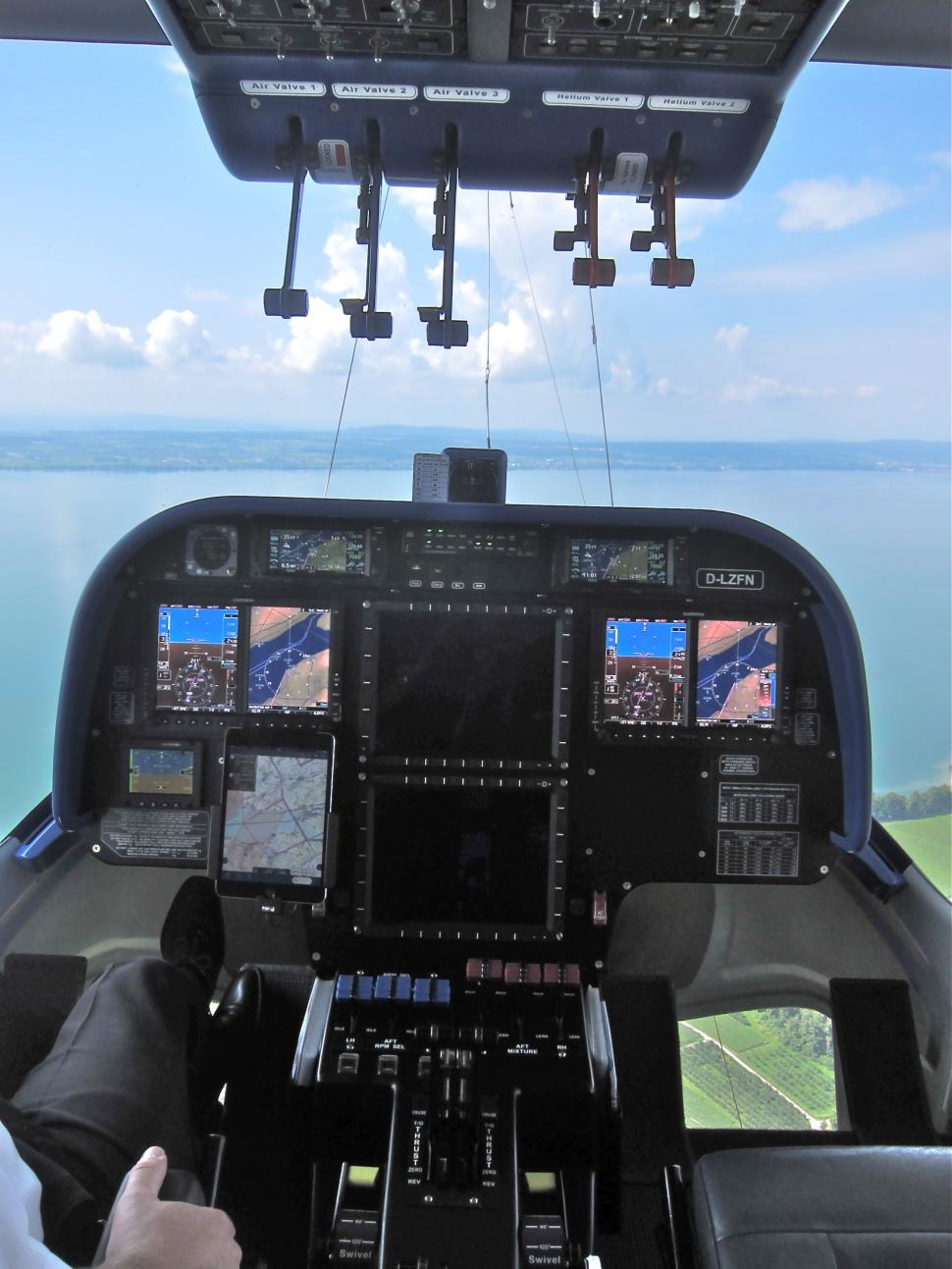 Up front there’s a surprisingly modern display of digital screens and computer game joysticks in the cockpit, our minds are so retrostuck in black-and-white images of Zeppelins that you kind of expect analogue dials and bits of wire, but things have moved on haven’t they. The urge to pistol-whip the pilot, wrestle the controls and dive the Zeppelin into the electric bikes and fatbikes hall at Eurobike is strong. Too many Bond films I guess, and no chance of a spectacular ball of flames. Dammit. 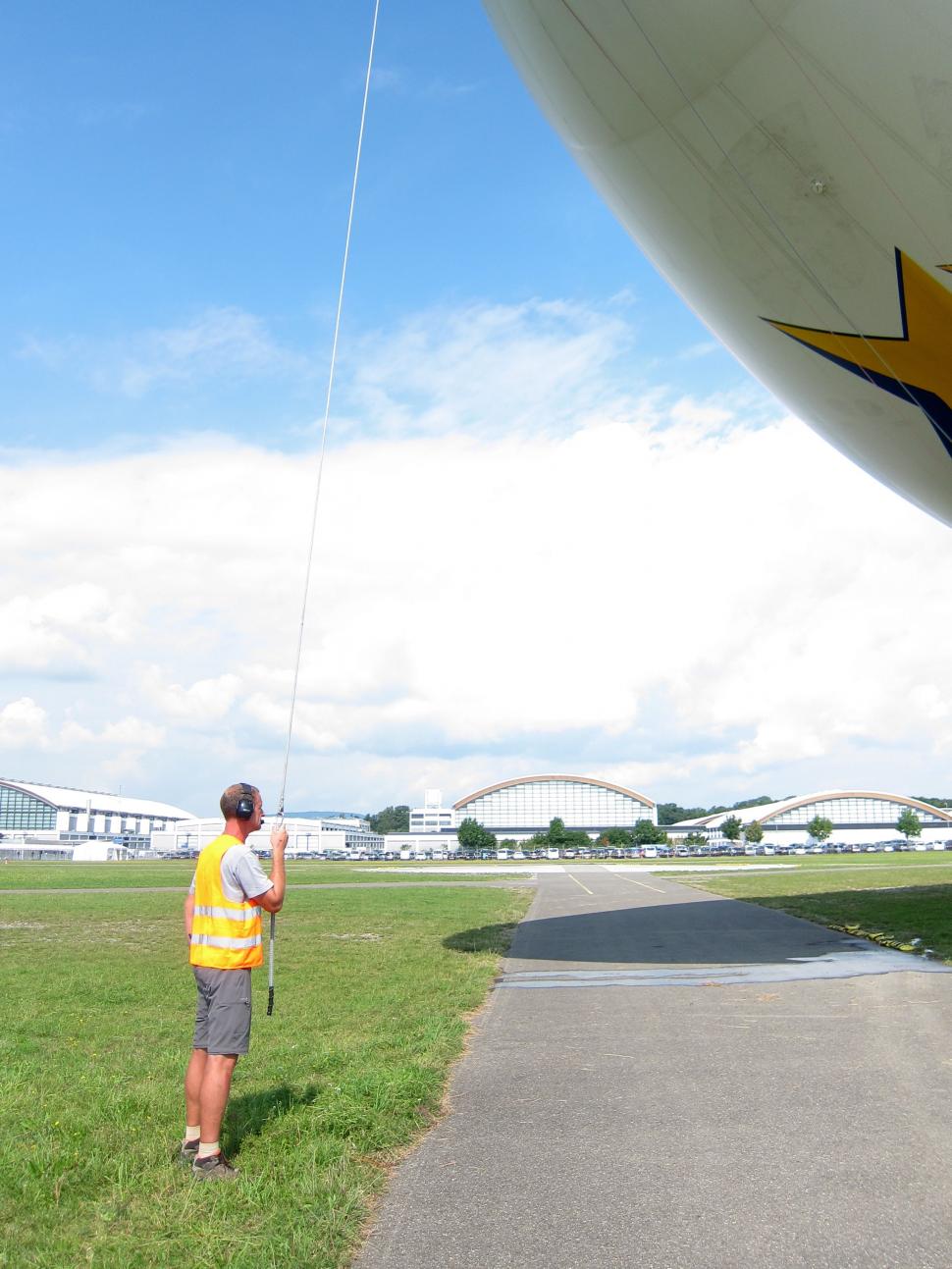 It’s a very smooth and quiet flight, there was a teeny bit of buffeting just after we took off where it felt a bit sea-sicky ever so briefly. With the gondola being slung underneath the belly of the beast and its large windows passengers get an amazing panoramic view of everything they’re floating over. It’s a very relaxing experience. There’s no hard of bumpy landing back to earth because we don’t land, we just hover over the grass, the airship held by a man and a rope again and we disembark in a polite and orderly fashion. And that’s it, we each get a glass of fizzy wine to celebrate and a certificate to prove we’ve been up in a Zeppelin and we shuffle out towards the Ashmei Airsteam for some proper English beer and chats. The trip has been a little floaty dream really and might take some time to soak in, indeed the rest of the day does somewhat fuzz by. It’s not been a life-long ambition but it’s certainly been an once-in-a-lifetime experience. I’ve been up in a fucking airship! Oh the profanity. Thank you very much Ashmei. 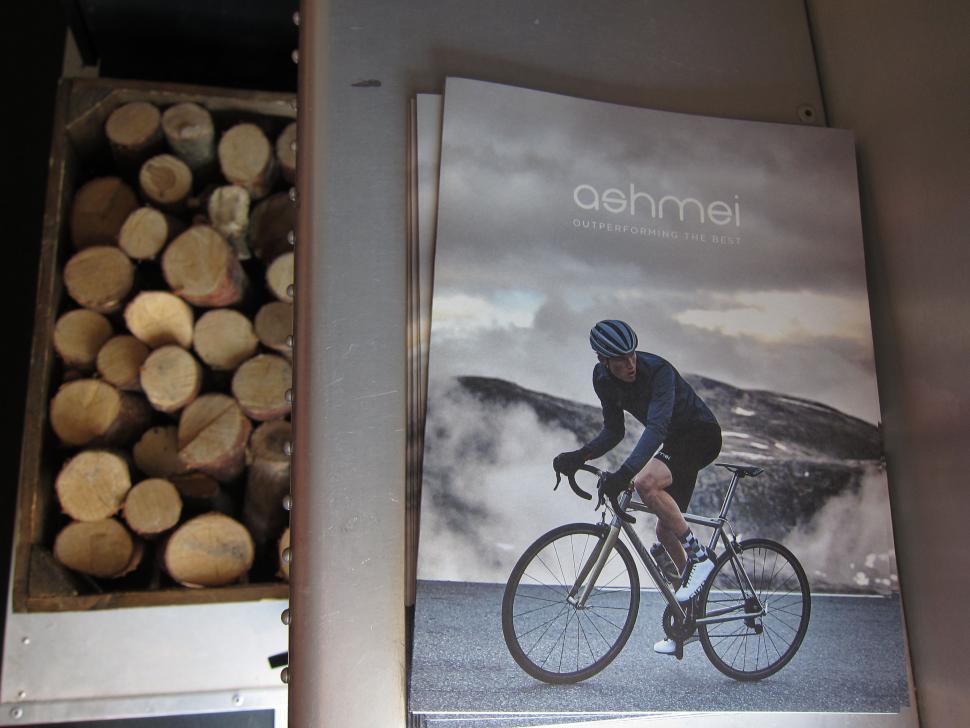 Oh, they do some really rather swish cycle clothing, they could have just given away some of their nice jackets really.