Tour of Britain - My Stage Five

Proper stage racing, with real riders I know, within touching distance. Well, Glastonbury, anyway, and that's less than two saddle-hours away. Lanes and B-roads take us towards the Tor, and we're chewing a blustery headwind all the way. The roads are quiet, save for the police bagging and labelling another smash on the notorious junction outside Wells. 16 casualties in 5 years, it warns. They'll need a new sign now.

Over the levels St Michael's tower is our guide as we wend our way on the ancient roads, and by the time we've installed ourselves outside The Crown with a well-earned coffee the build up is in full swing. Beats pump from the PA, blown on the strong winds that wreak havoc with the procession of bikes adorned with a cornucopia of unaerodynamic accoutrements. Except the guy who's dressed as a hedge. Crowds mill, a curious mix of bemused Glastonbury locals, school kids, MAMILS and hoary CTC types, taking in the town's almost unbroken strip of cafes and new-age tat emporia. "You need to buy some normal shit", opines Jez, "you have to go to the next town". 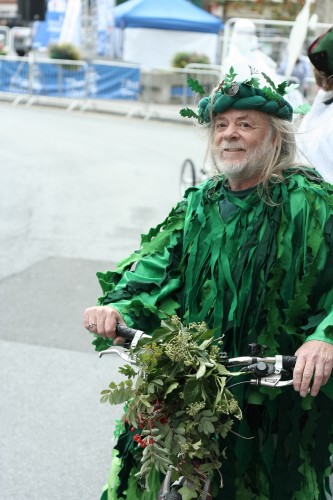 The racing starts with some team sprints up and down the finishing straight, schoolkids from the area branded up for the day and pushed out in front of a not-quite-frenzied crowd. Kask helmets and British Cycling bikes and tabards very much in evidence, the kids give it a good old go and we try and do our bit, bashing the hoardings and siding with whoever starts on our side. Come on you blacks. Come on you yellows. One of the local schools is, apparently, called 'Hugh Sexy'. Or maybe it's the wind. Despite our headwind being a tailwind for the race, and a fierce one, the race slips behind schedule. Maybe they've voted themselves a rest day. Snatches of news get relayed. There's a break. Wiggo's in it. Now he's on his own. Now he's not. They have seven minutes. Eight. Five. The peloton won't chase them. The peloton are chasing them. By the time it's confirmed that the break is going to stay clear everyone's hoping it'll be Wiggins taking the line, and the buzz intensifies. Motorbikes appear, then the lead car, then a lone figure, but it's not Wiggo. It's Marco Frapporti, the Italian picking his moment and leaving the rest of the break behind somewhere south of the finish. We're watching from the posh bit, after talking some rubbish to a locally-sourced marshall and sneaking through a gap in the fence. We don't have the magic red wristbands, but they let us have a beer anyway, and there's more room on the barriers. Wiggo appears next, summing up a nearly season for Sky with a wave as he leads in the rest of the break. One by one they appear, then an awkward pause, then another car, then a furious sprint, then the broom wagon, then it's over. One by one the jerseys get awarded by the podium girls and whichever local dignitary or sponsor is top of the list that day. Handshakes, awkward donning of podium jerseys that do up at the back (left arm in that sleeve), flowers and kisses. Albasini sprays the champagne, the marshals decide they've had enough marshalling and let everyone in to the bit of tarmac they've been jealously guarding for no reason, and it's time to go home. 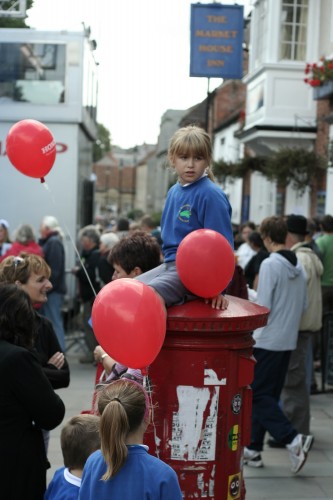 By the time we've got ourselves together and ready to roll out past the row of parked up race vehicles the podium is halfway into the back of a van and the hoardings are getting stacked in the road. It's an ephemeral life, tomorrow they'll be packing the same stuff into the same van in Great Yarmouth, Colchester the day after. The announcer will no doubt be lauding those stages as 'the best of the tour' too, for the benefit of the assembled masses and the paying guests. But it's been fun.

The wind is our friend on the way home. Don't know what took Wiggo so long.