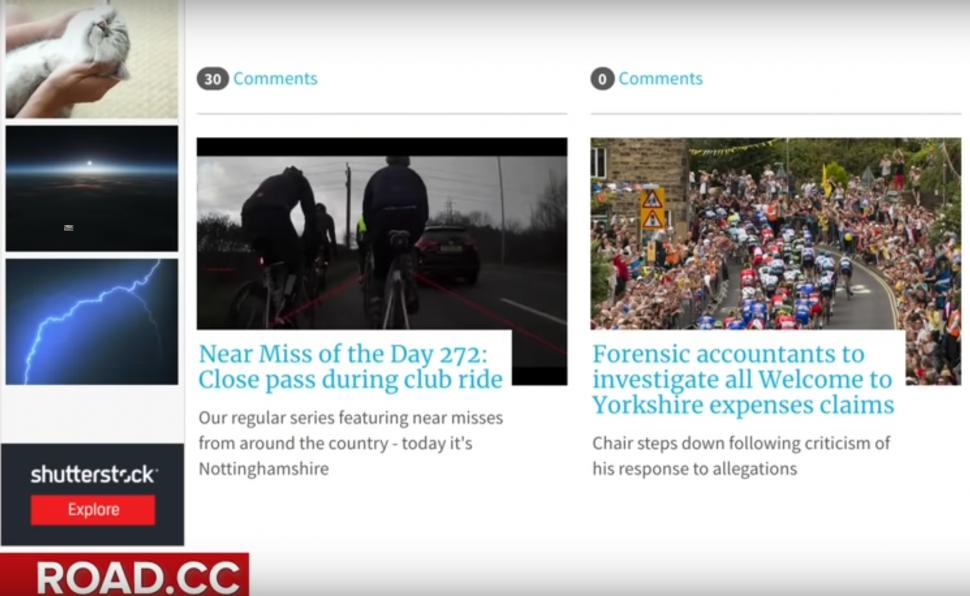 Over the weekend the Sunday Times declared victory for motorists in the ‘War on cyclists’ with a story claiming that according to a Sport England survey in the last 12 months 355,000 recreational and commuter cyclists had been driven off the roads by a combination of angry drivers and potholes,  seeking sanctuary in Watopia and other virtual purgatories accessed from your spare room.

We dealt with the predictable but laughable attempt to divide cyclists and drivers in to two warring tribes in our coverage of the piece on Sunday, and also why the methodology used to obtain the figures quoted was flawed. We also followed up on Tuesday with Cycling UK’s response - in which they too condemned the Sunday Times’s writer’s attempt to cast the situation for cyclists on Britain’s roads as a purely Us Vs Them scenario.

Yesterday Youtube cycling channel, GCN entered the fray with the presenters of its magazine show, Simon Richardson and Dan Lloyd, having their say on the Sunday Times piece which Simon was made aware of by our story. Both deplored the “irresponsible rhetoric” of tribalism and war but also agreed that some cyclists were partly responsible for that tribal rhetoric - cyclists like...? Well, road.cc and our regular Near Miss of The Day feature apparently.

Simon: “To my mind it’s just fuel on the fire. It makes cyclists feel like they're unsafe on the road because they have a daily reminder, and also it makes it seem like motorists are just out to get us.”

Dan: “the fact is though that there are incidents on a daily basis where a cyclist gets knocked off by a motorist.”

I’m not going to have a dig at Dan and Simon: they are more than entitled to their opinion and I’m sure it’s shared by a lot of their viewers (and of you lot too) but as any student of NMoTD could tell them Near Miss of the Day doesn’t make it look like “motorists are just out to get us” for the very central reason that a goodly proportion of the incidents involve motorists who clearly hadn’t noticed there was a cyclist there to ‘get’ before they drove way too close on their life or death mission to get to work/home/Asda/B&Q or the drive thru McDonalds in as short a time as possible. That’s not stoking tribalism. It’s just taking a clear-eyed look at the way things too frequently are… if you’re not looking through the rose tinted lenses kindly supplied by your official eyewear sponsor*.

Anyway, what the above exchange makes me realise is that it's time for our annual (or is it bi-annual?) explaining of the reason we run Near Miss of the Day – for the benefit of those that don’t read far enough in to click on the big blue 'Why we run Near Miss of the Day' link near the beginning that takes you to the place where we explain. Or those, who like the drivers that so often feature in the clips, sail right past without noticing it's there. We're all more alike than we'd like to think .

From a purely business sense doing it probably hurts us too. Sources in the cycle industry often tell us that some of our rivals seek to use NMoTD, and our news coverage generally, as a stick to beat us with. Oh well. The difference between us and most of them is that road.cc is owned, managed, edited and written by cyclists, who ride every day (mostly to work) and we’re interested in everything that's happening out there, including the bad stuff. And we assume that you will be too because in the end the bad stuff is outweighed by all the good stuff that riding a bike brings.

So here’s our standard response to questions about why we run Near Miss of The Day.

"We’re frequently asked in the comments on Near Miss of The Day (NMotD) videos what’s the point of running them?

"The point is to make a point about driving standards and the lack of consideration for vulnerable road users on UK roads. It’s also to show solidarity with our fellow cyclists, because as beezus fufoon pointed out commenting on NMoTD 31, real life through a lens doesn’t always look as scary as it actually is.

"In our view it’s worth acknowledging that for the person on the receiving end of a near miss or close pass it was a damn scary experience and one pretty much any regular cyclist in the UK can empathise with.

"We’re not trying to put anyone off cycling - we love it and it hasn’t put us off, you all clearly love it too and it hasn’t put you off. And yes, at the moment close passes and near misses are a fact of life of UK roads - but that doesn’t make them right. Pretending they don’t happen isn’t going to help anyone - it’s certainly not going to help solve the problem.

"We recognise that changing attitudes towards less vulnerable road users amongst all road users – including cyclists – is something of a water-on-stone exercise and that NMoTD is more than likely going to run to a big number before the stone starts to crumble, but it’s not something that is happening in isolation. Attitudes are changing, particularly police attitudes - led by the trailblazing work of the West Midlands Police and Cycling UK’s great Close Pass Mats initiative.

"Incidents highlighted in NMoTD are already regularly picked up by local news outlets and regional television and radio news and they’ve been the starting point for discussions on local radio stations and newspaper websites about how road users treat each other – so the water is starting to make a mark on the stone."

We are aware there’s a balance to be struck and between paying witness (if that’s not too grandiose a phrase) to what too often happens on on our roads and over-emphasising the scary bits. We don’t run anything like all the near miss videos we get sent (we watch them all) and as we’ve gone on the bar for publication has inevitably risen. I sometimes worry that our eye has gotten a little jaded and I’m keenly aware that as mentioned above what doesn’t look that close on camera often does look and feel a lot closer in real life.

I'm also aware that sometimes when I look at the homepage it often contains a dizzyingly diverse – shading in to random –  mixture of cool, weird, interesting, bad, dumb, shocking, funny and unexpected (in pretty much every flavour of unexpected) stuff to do with cycling and I fret that maybe it's all too diverse and possibly random. Then I reflect that each of those words could also be used to describe different bits of my hour long ride to the road.cc office each day. And it often/usually contains a close pass too. The only thing the homepage doesn't have is sweat, and we probably want to keep it that way.

*road.cc – friendly, but will bite