Laura Laker's Charge Plug custom build
After a decade forcing her hybrid bike to do things it wasn't designed for, the time for an adventure bike has finally come

I was somewhere in the North Downs, pedalling an entirely functional but totally inappropriate hybrid bike laden with panniers, amid undergrowth that appeared to be magically growing out of soft sand.

For my part, I was sinking. My too-skinny road tyres, the weight of the bike, and the presence of the panniers, was frankly hindering my progress significantly and I watched, as if in a dream, as my companions pedalled breezily ahead while I pushed the pedals in vain, skidding and sliding into the sand, and falling behind in slo-mo.

To be honest, the bike in question had taken a lot more in its life than was reasonable to expect of such a machine. A humble hybrid, the volume of aluminium that comprises its frame makes it both indestructible and rather too stiff – ie uncomfortable – over long distances.

Check out our latest gravel and adventure bike reviews

I’ve owned said bike for a decade, and in that time it’s taken me across Scotland, around the Netherlands, along the coast of Portugal, on paths made of rock, hard sand, soft sand, and even on a Portuguese motorway hard shoulder, in all weathers. It’s been lashed to a boat on the sea, crossed Dartmoor in freezing rain, carried me and my tent to festivals – all on top of its day job of  London transportation.

There was no escaping the fact that the time for a new bike was long overdue.

Build it, and adventures will come

I was after an adventure bike that could handle bike packing and possibly touring, with some rough stuff thrown in, ideally made from steel because I've always wanted a steel bike, and not weighing too much. Something that could take me away from the hell of British roads, into the wild. Something on which I could get covered in mud, unfurl a small tent, sleep, get up and repeat.

I scoured the internet for new and secondhand steel-framed bikes and realised they can be expensive and hard to find in the right size.

As it happened, Tony Farrelly, co-founding father of road.cc, had a steel Charge Plug frame in my size kicking around the office, and he offered it to me for free to build up, for the purposes of journalistic research.

I cycled from Newbury to Bath to pick it up, the shooting pains in my hands along the rough Kennet and Avon Canal towpath underlining how ill-suited the heavy metal hybrid was for such things. I loaded the new frame on its pannier rack, and wheeled it, via the train, home to East London.

Shhh... it doesn't know it's carrying its replacement home. Time for a proper adventure bike, is why. Thanks to Tony at @road.cc for the donation. Worth cycling 100k to Bath for. Needless to say, I'm not cycling home.

How to choose parts

The great thing and the scary thing about starting with a frame is you can choose what to put on it. First question was, what shape of handlebar did I want? 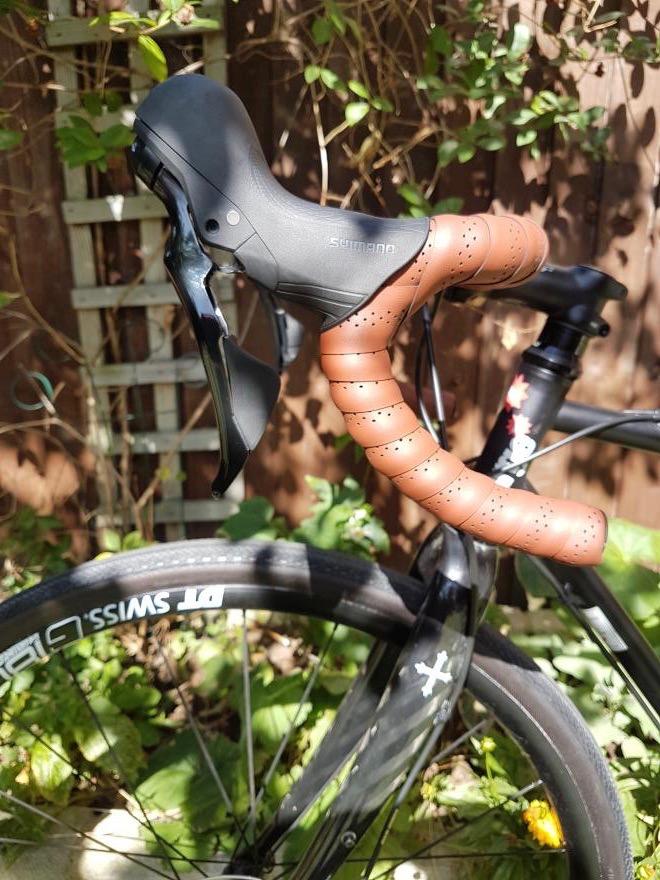 I toyed with the idea of flat bars; my hands are small and drops can be hard for braking and balance on off-road descents, as well as making my back ache. That said, Shimano now offers 105 gear shifters for smaller hands. I was nervous about the sharp pains my hybrid bike’s flat bars gave me, and I liked the different hand positions available with road bars. So, curly bars it was. 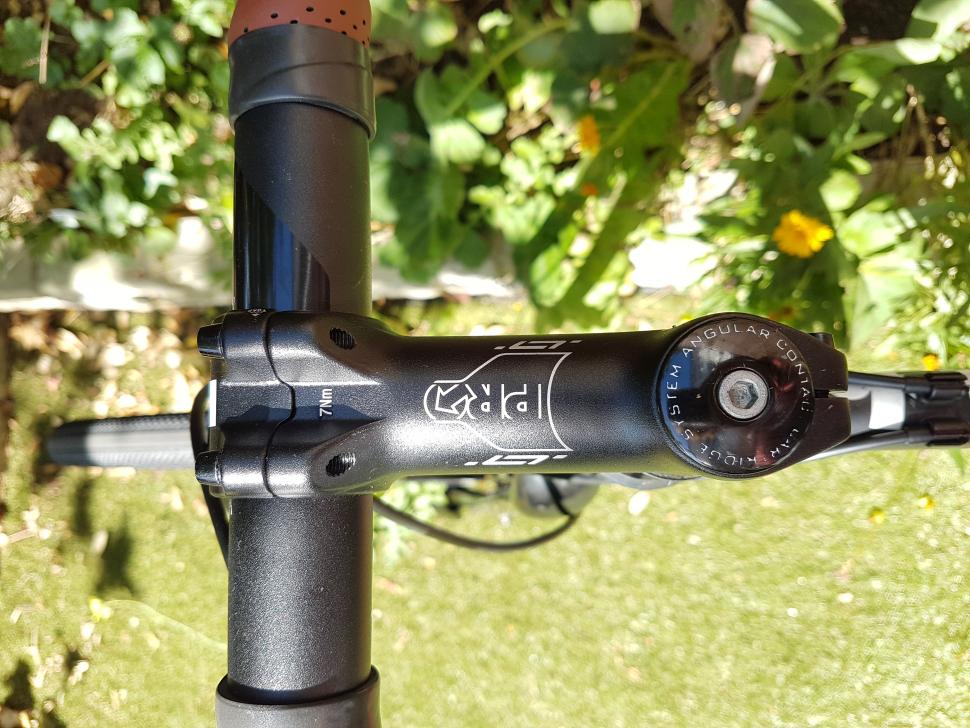 Handily for sizing, I’d recently had a professional road bike fitting at the Boardman Performance Centre. The new frame was the same size as my fitted road bike, so choosing handlebar width (36cm) and stem length was easy – I’d pick the same size. This Pro LT stem got good reviews on road.cc and wasn’t too pricey. Tick.

For gearing, I took to the internet. This feature explains the basics of gearing – with a focus on road, of course. The gearing on my road bike just isn’t low enough on hills for me, let alone gravelly climbs, so I wanted something lower.

road.cc’s John Stevenson points out that gearing on out-of-the-box gravel bikes often isn’t low enough for actual off-roading. As a solution he mixes road and mountain bike groupsets for a Franken-bike super-low gravel gearing – which Shimano advises strongly against as they aren’t designed for that. But Stevenson made it work. Madison, the distributor that kindly provided many of the parts, said Shimano wouldn’t countenance such an approach, and mountain bike gearing won’t work with road bars and brakes, so road gearing it was: 52/36 chainrings rather than a 50/34 compact setup, and then somehow I ended up with not the lowest 11-speed cassette, an 11-28. The 36 x 28 isn't especially low but it's still lower than on my four-year-old road bike.

What do Cav and I have in common?

It’s a curious though perhaps predictable feature of cycling that gearing ratios are largely dictated by the pro peloton, and vary according to racing fashions.

As Ben from On Your Bike at London Bridge (the bike shop that did the build for me) put it: “The pros spin more these days, because they’re doing more and steeper climbs; which makes for better telly.”

Customers are sometimes baffled by this, though. He says: “People come in and say, ‘can you give me a higher gear, I’m spinning out’, and we say, ‘you’re really not, you’re just used to higher gearing, where you’re pushing a lower cadence’.

“This trend is good for us [regular riders] because it gives us more gearing options, and it’s actually better for the longevity of the gears, because you aren’t putting so much pressure on them.”

Though lower gearing has trickled down to the mass market, gears are still skewed above what a below average rider like me needs for rough stuff adventures. As John Stevenson puts it, “most of us aren’t Mark Cavendish sprinting down the Champs Elysees.”

A change is gonna come

Another little quirk of cycling is how quickly mounts and fittings change. I learned this when the bike shop called to say the disc brakes I’d selected didn’t fit with the frame mounts. “The thing is, you don’t,” said Ben. “It’s just that parts from five years ago aren't always compatible with today’s bikes.” Thankfully there is a converter. On top of that, the frame’s front derailleur cable routing is along the top tube and down the seat tube, whereas my front derailleur requires the cable to come in from below, so another adaptor was needed. 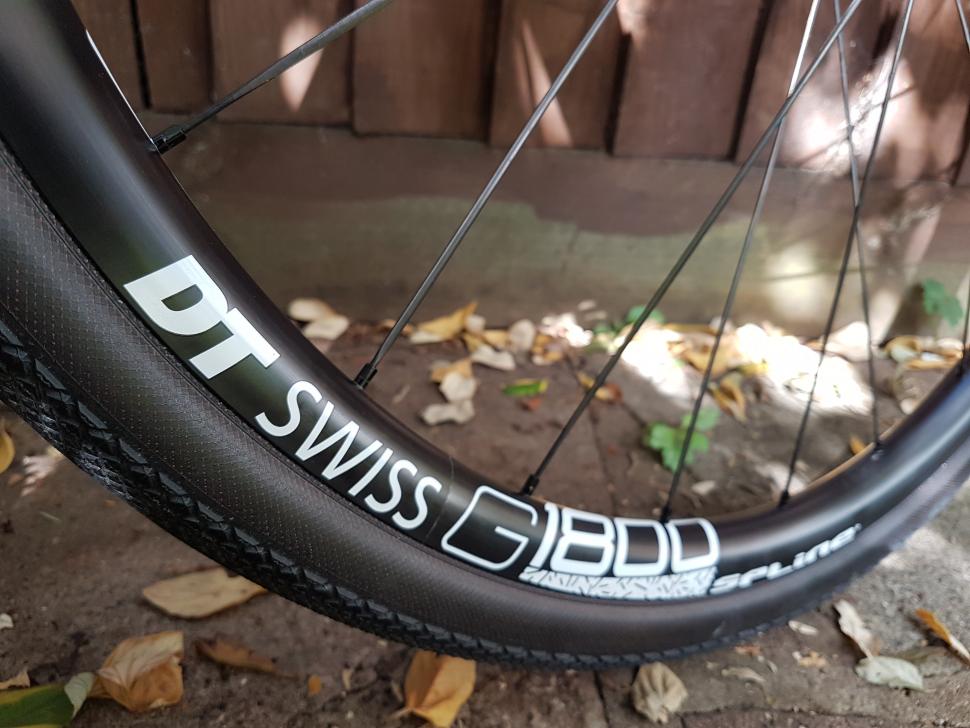 Are you sitting comfortably?

The tyres are some good-looking Hutchinson Overides – their slightly brown sidewalls pleasingly match the brown bar tape I chose, which is the main thing! I opted for 35s in an attempt to get the balance between fatness – ie sand riding capability – and weight. 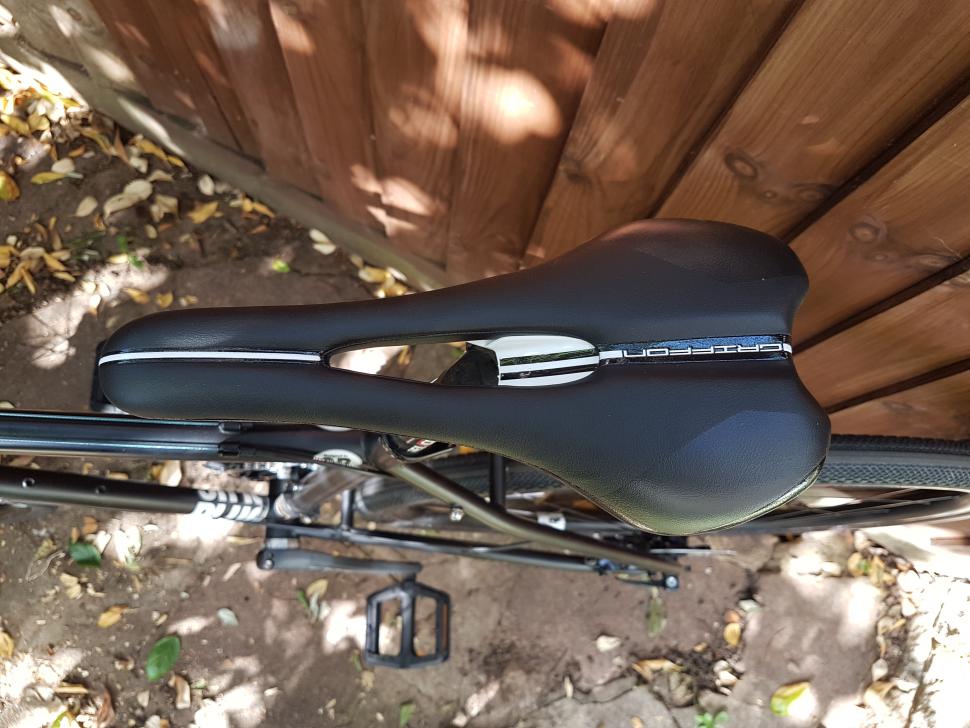 I naively thought saddles would be easy. I’d had my sit bones' width measured, and chose a saddle based on that width, with the cut out that tends to work for me – but not trying it out was a bad idea, as we’ll see.

Did I get what I wanted? What would I do differently?

The internet can be a double-edged sword and on the whole, I learned, its wealth of information can’t beat the personalised, expert advice you can get from, well, experts. In the case of someone unfamiliar with the vast options available when building bikes, those experts are skilled bike shop staff who know the pros and cons of different options, and how they fit with your individual situation and what you're after.

As On Your Bike’s Ben put it to me, as my bike levitated in the workshop repair stand: “We know you can buy parts online for less than we can buy them wholesale, but the reason we charge more is because we know what we’re doing.

“If you don’t know what you’re doing, tell us, and if we get enough lead-in time, we can help you choose those parts.”

We haven't had enough of experts

If I did it again I’d take Ben’s advice, talk it through with the shop, and perhaps be brave enough to go for mountain bike gearing, and possibly even flat bars, arguably more comfortable for me over longer rides. After agonising over flat or road bars for so long, without really talking it through with anyone, I perhaps funnelled myself needlessly into a road setup, gears and all, when it maybe isn’t the best option for me. If I were to advise my two months' younger self I'd recommend not buying a saddle online unless you’re replacing one that you already know works. As soon as I sat on said saddle, I was conscious my whole weight would be on the soft tissue I didn’t want it to be on. My sit bones were entirely off the edges of the saddle.

I went to Hub Velo, an excellent independent bike shop in Hackney, whose knowledgable staff measured my sit bones again via a gel pad, getting a different figure from the first place. They also measure a rider’s lower back flexibility and, via a computer programme, suggest a number of saddles which they’ll fit for you.

I bought the saddle they suggested, rode it once and then set off on a 980-mile end-to-end ride on it (which you can read about here), and was very comfortable, thankfully. Don't try this at home. 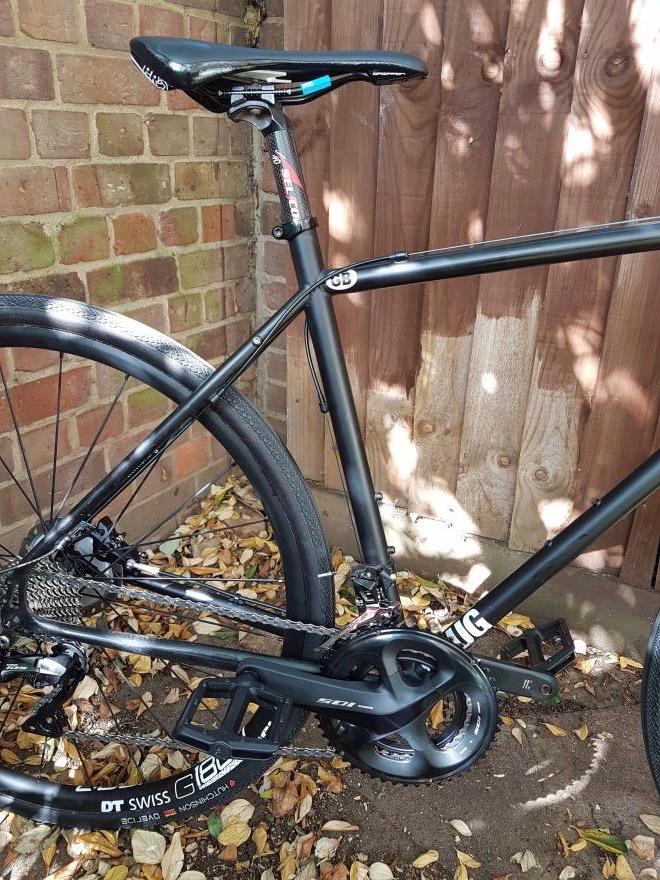 I’ve no regrets over the build. I love my new bike; it looks great and I can’t wait to take it on some proper adventures. Over time I can tweak parts, but I think the theme here is, if you're new to this sort of thing, talk to the experts – it may be more expensive but you’re more likely to get the bike you want.