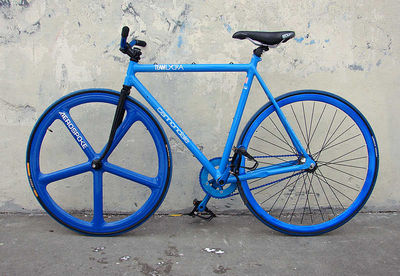 Not much remarked on, but this week the imminent death of the fixed gear bike as the ultimate badge of style was announced in the Times. It's obituary penned by fixed gear rider Richard Caseby, who briefly mourned its passing before moving on to big up Fifties-style French courier bikes as the next big thing… he's just bought one.

The fixed gear bike was the cycling equivalent of those old guys in the Buena Vista Social Club: fashionable in the early part of its career then settling in to a long period of neglect admired only by those with more specialist tastes, before bursting back into unexpected popularity right at the end, er and and then dropping dead.

It was in the Times so it's got to be true and not just another London hipster trying to be first in the queue to pronounce a fashion dead and probably failing no no no. Confirmation came when a poster on the London Fixed Gear forum asked for advice on gearing up a fixed. So it's over then… (Note to self: must fire TR, and send back those yellow Halo Aerotrack wheels which are giving me a migraine just looking at them).

I've never owned a fixed, but I've ridden a few (and it is a few) and I really like singlespeeds so I was saddened to hear of their imminent death, especially as I'm not keen on the whole delivery bike thing… not with the hills around here. So what's the problem, why the gloomy prognosis for the health of fixiedom?

It's because they are too popular apparently. Now that AA Gill, Will Self, and every graphic designer inside the North Circular has one mainstream fashion death must inevitably follow, the high water mark has been reached it's all down hill from here (not so easy on a fixed) the hip will move on… possibly to 1950s French delivery bikes. Or who knows, they might discover the benefits of the freewheel, so enthusiastically embraced by their great grandfathers when it was invented back in 1898 – hell, they might even try gears. The thing about riding a bike is it's addictive all those endorphins kicking the habit is not so easy even for the fashionable. So cheer up.

Fixed gears may become less fashionable but they aren't going away too many people love them too much just to ditch them because they're might not be as trendy as they once were. Plus there are great swathes of the planet that haven't seen a fixed gear bike since 1898, they may be becoming mainstream in London but outside of the capital they are still fairly thin on the ground.

Here in hilly Bath I only saw my first fixed bike being ridden on a hill at the weekend – a Chrage Plug Freestyler piloted by a fit looking bloke who looked like he'd been air-dropped in from Camden Town – he didn't seem to be enjoying himself. I had to stop and watch his progress up the hill – it felt like rubber-knecking a car crash – mercifully he turned off just before things got really steep. I don't blame him I didn't enjoy riding up their on a fixed gear either though not as much as I didn't enjoy riding back down it … and I was getting paid for the privilege. If he'd flipped his hub over to the freewheel side it would have been so much more enjoyable.

Mind you, if people are up for riding fixed in places as challenging as Bath there's plenty of life left in the phenomenon yet. Especially if your fixed has a flip flop hubs allowing you to switch it over to the less pure, but far more enjoyable (on hills anyway) singlespeed freewheel side. Singlespeed's now they are the future as are new evolutions of the fixed format like Fixie Inc's experiments with belt drive and different chain pitches and KuK's new Convert2 with its Swopout dropouts (pictured below) that let you run it with gears or as a fixed/singlespeed. Fixed or free it depends on the terrain and your preference, but either way around town one gear makes a fair bit of sense.

So that's all right then, well no it isn't says Ben Auparker blogging on bike fashion – the spread of fixed gear fashion is a bad news beccause in his opinion the bikes and the scene they have spawned are nothing but fashion : “ If you took a swaying, brainless, gazelle-like catwalk model and turned her into a bike, a fixie is what you’d get”. A good looking bike then? No says Ben who goes on to list five fashion faux pas commited by fixed riders. No 2 is Spoke Card which Ben derides as “This is the bike equivalent of wearing a top-hat with the ace of spades tucked into the band - foolish teen-minded posturing which serves as nothing more than an in joke between equally feeble-brained “insiders.”

Maybe Ben's problem isn't with the bikes it's with the people who ride them… chill out fella.

Here's some vid of fixed fun from back in the day…