Decisions, decisions. We’re out in the Italian sunshine riding new Bianchis. Shall we carry on for another half hour on these empty roads, or shall we head back to the hotel and crack into the cake and coffee? It’s issues like this that makes the life of a bike journalist so darn stressful. How did it all go so horribly wrong?

We – that’s editor Tony and me – are just back from Bianchi’s launch of their 2012 range in Bergamo, near Milan. I thought you might be interested to know what happens on launches like this, not to show off (despite that first paragraph), but to give you an idea of how it all works.

Most of the bike launches come at about this time of year. Next year’s bikes can make it into the shops any time from late summer onwards, but we get shown them a few weeks or months in advance of that.

Sometimes information is embargoed – we went to a Shimano launch way back in February and aren’t allowed to tell you about certain new technologies and products until next week. Brands might do that if they don’t want to affect sales of a current product, for instance. We could tell you, but Shimano would never invite us back again, so we have to play the game. But more often than not, brands want to show us their new kit and for us to tell you about it as soon as possible.

So, at this time of year the big brands will often invite us out to their place to see the new line-up. They’ll invite journalists from all over Europe, maybe all over the world depending on the size of their budget. At this Bianchi launch there were hacks from the US, France, the Czech Republic, South Africa (I think), the Democratic Republic of the Congo… Okay, maybe not the Democratic Republic of the Congo, but 13 different countries in all.

Me and yer man Tony had met up in Bath at 3am, driven to the airport and flown out to Bergamo (Ryanair, not BA), waited for a bus that never arrived, waited even longer for one that eventually did arrive, then walked a zillion miles from the bus stop to the hotel, resolved to take a cab next time, and eventually got to our rooms.

When you get to your room you always have to sort out the internet connection – otherwise nothing is going online until you get home and that’s no good. It never, ever works first time so you have some back-and-forth with reception until it’s vaguely working. And once that’s done, it’s time to get busy. 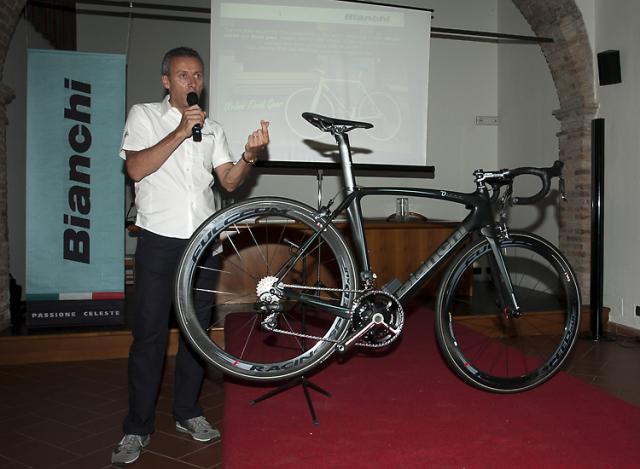 Bianchi took us out to a castle in the back of beyond to see their bikes – an hour away on a coach once the driver’s questionable navigation skills were factored into the equation. And once there, Bianchi showed us the bikes.

Bike presentations come from the marketing guys and it’s their job to accentuate the new and the positive and the interesting. That’s what they’re employed to do – to big-up the brand and the products. They usually bring the tech guys out to help with the detail, but the marketing guys present the stories the brand wants to highlight. Sometimes they have a big new product. Sometimes they have a bunch of updates and have to make it sound major. And it’s always lighter and/or stiffer than last year’s equivalent, faster, and usually more carbon. Bianchi are bringing out a new aluminium bike called the Impulso and it features what they’re calling Triple Hydroformed Technology. They tell us that it makes the head tube area 10% stiffer than a conventional design. 10% stiffer? It sounds far fetched so we ask a bunch of questions about how they do it, but we’ve not seen the bike at this stage let alone ridden it, so we’re just getting the background here. 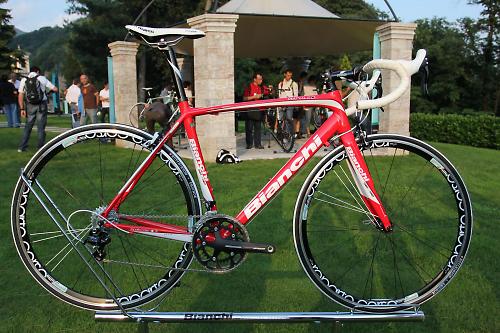 We’ll get the lowdown on the entire range. That might take a couple of hours. It depends how much new stuff they have to show us. Then we usually get to check out the products for ourselves – get photographs, pick them up, examine them, scratch our chins knowledgeably, that kind of thing.

There’s always a big meal in the evening and Bianchi’s are legendary. Go to see any brand in Italy and they’ll feed you pretty much constantly for the duration of your stay. Even by Italian standards Bianchi’s food is… plentiful. There were so many courses this time that I lost count. About seven? Something like that. It just kept on coming. Loads of wine too (I didn’t, actually). It’s just a big social occasion.

23 and a bit hours after we got up our day is over.

Five hours later, we’re up again to bolt some breakfast down and head out to ride the bikes. This is the best bit. Of course it is. We get to ride new bikes on foreign roads. We’re playing on bikes for a living. It’s cool. We ride in a group to start with, at a pretty easy pace. For once, everyone does as they’re told and sticks behind the ride leaders. That normally doesn’t happen. Usually, someone will push the pace on a climb, people will drop off the back and those at the front start to race each another. But everyone is well behaved today… including me. It could be the lack of sleep. 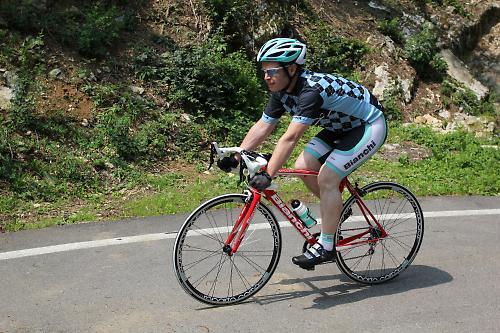 Once we know the short route, we can all do our own thing: grab different bikes, put our own pedals on and ride them. It’s a bit of a taster session, really. We never get in enough riding on a press launch to do a full bike review with ratings and everything. A few weeks ago, I went out to the launch of Cannondale’s new SuperSix, again in Italy, and got to ride it for [checks training diary]2:30hrs one day and 5:25hrs the following day. That’s not typical. Usually, we ride two or three bikes for an hour or two each and can write a ‘First Ride’ where we explain all the background, present the tech information and give our initial impressions – but it’s not a full-on review. So, we did some more riding, found a decent spot for action photography and got everything in the bag… or, more precisely, on the memory card. No pics, you weren’t there – that’s the way these things work.

Back at base, there was just time to add extra detail to last night’s story and grab a spot of lunch before jumping in the back of a little hatchback and getting a lift to the airport to do the whole Ryanair thing again. Queues, cramming everything in your hand luggage, coffee, cramped seating… it’s the same every time.