Into The Haute Routine

We’ve only been at it a day and already a routine is beginning to settle in. Up early doors, put on cycling kit that’s been pre-sorted the night before, totter down to breakfast, stuff as much croissant and bread into your face as you can, back up to room, brush teeth, pack bag, fill jersey pockets, deposit bag at pick-up point, pedal to start line, ride. Stop, eat, wash, eat, briefing, eat, sleep, wake up. 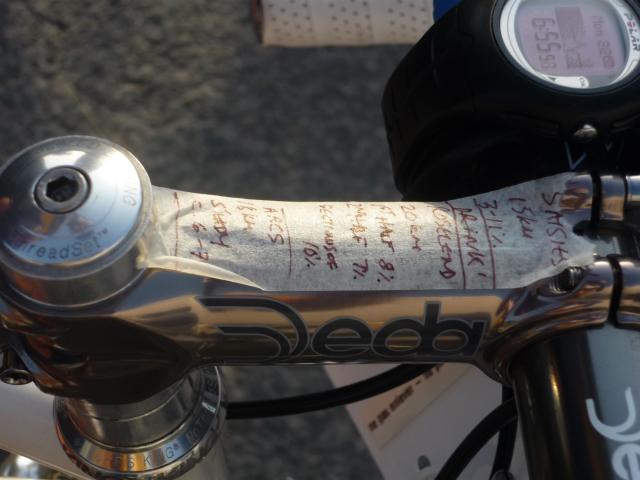 Today’s 8am start-time means an almost luxurious 6hrs sleep before we have to cleat up and the peloton heads out of Megeve the way it came in yesterday but under race control at a steady 30kph until we hit the base of the Col Des Saises 10km down the road and the first of the not to be underestimated climb combination of the day. It’s a steady 15km long in shafts of morning sunshine and long shadows and spirits seem to be relaxed in the group now that the first day has been survived and we’re on our way. I seem to find myself resolutely at the back of the bunch and stopping frequently to take photos I never get to work my way steadily up the field, and so I spend the whole day overtaking the same riders, stopping, taking some pictures, and then overtaking the same riders again, and it becomes quite the joke amongst the rear guard. Up front there’s proper racing going on and the first person over the line completes the 90 timed kilometers of the 100km from Megeve to Les Arcs in 3hours 10minutes, not bad when there’s 3,000 metres of climbing involved. The descent of the Saises is a joy, through open fields and twisty little villages, turning right onto a cheeky little rise before switchback descending again through trees, I would have taken some pictures to show you but it seemed a shame to interrupt such fun, you’ll just to come have a look yourself, and there was also the constant fear of missing the cut-off time if there was too much delay. We’re dumped onto a classic Alpine valley floor, hills like walls crowding a small strip of flat land where life is crammed and a short nip along through Beaufort and we reach today’s second climb, the Col du Cormet de Roselend. Thankfully this side of the mountain is mostly still in the shade under another hot hot cloudless sky so it’s a cool ascent of 20 kilometres topping out at 1968 metres. At some point on the climb there was a lady on an old green Gitane bike, riding in flip-flops, without much speed difference between her and the lycra and carbon riders around her. 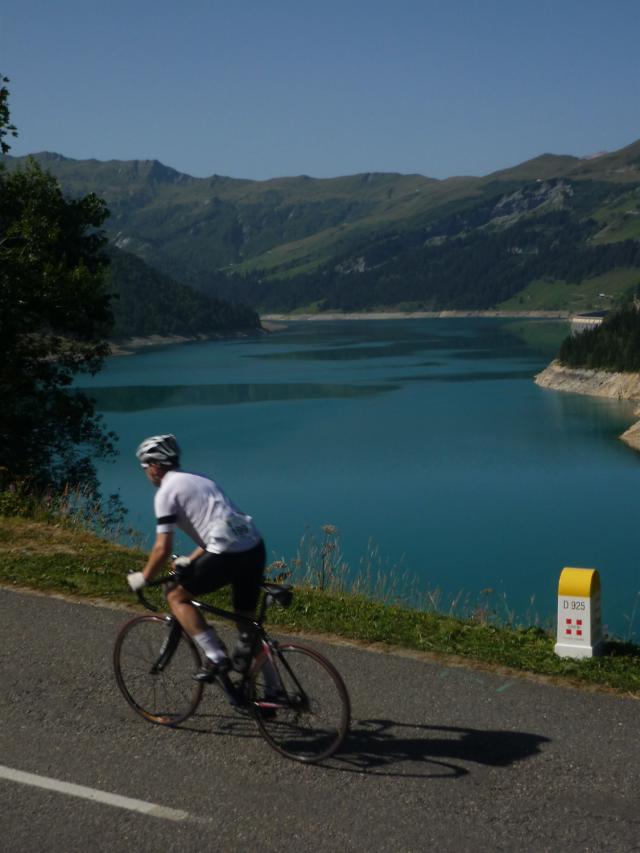 The first ten kms are steady away until the sub-summit of the Col du Méraillet where the road levels off to circle a lake of the most fantastic turquoise, everyone takes a chance to catch their breath by slowing down to go “ooooooh” at the lake before tackling the harder last 5kms or so to the top. Leaving green fields and cows behind the road changes character and cuts dramatically across a rock face whilst from the left a massive fist of mountain threatens to crush from the left and squeezing through the gap between the two the last few kilometers wiggle up fields to a feeding frenzy at the summit feed-station as people fuel for the final effort.

We’ve been warned about the trickiness of the Roselend descent but the first section is fast and open with fantastic views across to the mountains on the other side that instinct tells that we’re going to be climbing soon. Some way down the descent hits the trees and the road narrows significantly and adds more turns into the mix to serve up the kind of cautioned difficulty, and look, there’s the corner where Johan Bruyneel crashed off the mountain. I have a giggle overtaking cars and it’s a quick dash through Bourg-St-Maurice and onto the climb of Les Arcs 1800 which is totally unremarkable in that it’s designed simply to get coaches and lorries up to the ski-station and therefore uniform, tedious and lacking any character. On the plus side the gradient is easy and steady and the tarmac is good, and it’s the last climb of the day. And there’s supper at the end. But the 3 cols, 100 kms and 3000 metres of climbing have taken their toll on some and I spend a short time in the last stretches trying to encourage a rider who is flagging badly but after a while he slumps over his bike again and waves my possibly annoying presence onwards. The 3 cols, 100 kms and 3000 metres of climbing have also taken their toll on my stomach, as despite a large amount of finish line snackage there’s an emergency dash for pre-diner supplies. I’m eating for tomorrow.