Have West Midlands Police lost their way on cycling?

Time was, West Midlands Police were synonymous with excellence and innovation in protecting people cycling.

The duo of Hudson and Hodson (that’s Steve and Mark, respectively) pioneered ‘close pass’ policing in 2016, where officers on cycles monitored overtaking drivers, and anyone conducting dangerous manoeuvres faced education or enforcement. Data helped them identify and target the riskiest manoeuvres for cyclists, and the ones likely to scare people off cycling – and the tactic was introduced just as cities like Birmingham were trying to reduce air pollution and get more people on bikes. 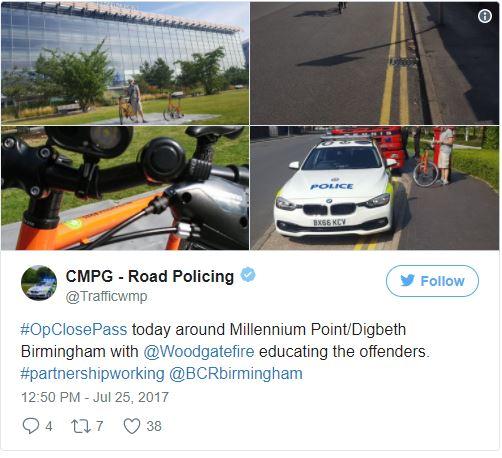 Operation Top Deck came next, with police on buses spotting texting (or cereal-eating) drivers. On launch day in September 2018 45 drivers were caught using their phones while driving and, yes, one woman was eating cereal. One offending driver was en route to a speed awareness course.

Op Close Pass was adopted by police forces up and down the country, and Cycling UK funded the accompanying educational mats (see main image).

With record numbers cycling since the start of the pandemic, you might think protecting cyclists would be paramount for a roads policing force.

However, in February one man submitted footage of a head-on collision with a driver who was on the wrong side of the road, only to be told by West Mids the matter wasn’t for investigation. This turned out, after some emailing by the victim, to be an error, that video footage and a collision report given over the phone were treated as separate cases, and one part of the force initially said it wasn’t in their remit.

This certainly doesn’t sound like the West Mids police of old. We know the pandemic has heaped on the pressure for police, but we also know collision rates haven’t declined proportionately with quieter roads; they seemed to inspire the worst drivers to behave more recklessly.

It’s hard to tell what’s going on behind the scenes, but we know the two driving forces of these initiatives have since moved on, with Steve Hudson sadly off long-term sick, and Mark Hodson now working on main roads and motorways.

We also know in July last year the West Midlands Police and Crime Commissioner response to a report on roads policing rejected the recommendation ‘Operation Snap’ measures, where the public submits digital footage, should have “enough resources and process to support its efficient and effective use”. The Commissioner’s concern was, by raising the profile of such schemes “we would be inundated with responses which we would not have the back office capacity to deal with”, adding their method of administering Op Snap was instead “targeted and focuses on the highest harm offenders”.

It’s a long way from Hodson and Hudson’s 2018 blog post, that said: “Over 350 successful prosecutions later the work stream, that most said could never be done, just like many said #OpClosePass could never be done, now sits with the West Midlands Police Traffic Process Office. They are taking it to even greater levels that should see 3rd party reported prosecuted offences become an integral part of our plans to create a safer road going environment for all the residents of the West Midlands region.”

There are clues on social media. Promotion of these tactics was a key part of their effectiveness, police believed, on social media and in the news – it was about reminding drivers any cyclist could be an officer.

Powerful and bang on logic from @WMPolice other forces read and learn.
Evidence supports this approach. It should be National standard pic.twitter.com/9qMEAnm10U

You’d see the @trafficwmp account sharing general information about the rules of the road relating to cycling and how to drive safely around people cycling. At times they intervened to clarify misperceptions, including among other police forces. They were so proactive on driver awareness and attitudes, when a Channel 5 production crew went to the force looking for ‘people who didn’t like cyclists’, they couldn’t find any.

Things have changed. Operations on buses aren’t practical with current restrictions, but standing at a pedestrian crossing, or cycling, are still eminently possible.
The force’s Traffic Investigation Unit account hasn’t tweeted since November 2020. The main Twitter account was renamed from CMPG [Central Motorway Police Group] – Road Policing, to West Midlands Police Traffic Policing, so the Road Harm Reduction Team’s account is blended into traffic policing. This matters; traffic police are like the general public, some have good attitudes towards vulnerable road users, some less so.

This means a risk of errors and the wrong messages being sent out, not to mention an absence of messaging.

It’s unclear if West Mids is still running Op Close Pass on a regular basis, but their Twitter account is certainly patchy. @TrafficWMP last tweeted about #opclosepass in August last year, in conjunction with a regional poster campaign on ‘sharing the road’. In the previous two years to August 2018, @TrafficWMP published just two tweets with #opclosepass – or at least those are the only two left. Are they still running close pass? If they are, they have ditched the social media awareness part.

#OpZigZag or #ZigZag hasn’t fared much better, with two @TrafficWMP tweets with that hashtag since June 2020, nine months ago. In January the Road Harm Prevention Team tweeted detection of 236 offences on three of the most dangerous roads in the West Midlands. It’s no insignificant impact.

It seems the Road Harm Prevention Team has similarly shrunk on Twitter. There was a flurry of #RHPT hashtags in February 2021, including on mobile phone operations, then just one since the previous February. Are they only operating one month a year now?

West Mids press office says they’ve “continued to carry out regular operations to maintain the safety of vulnerable road users and pedestrians across the region over the last year”, investing in extra officers to their Road Harm Prevention Team who are “often active doing road safety initiatives”; but they weren’t specific, and they didn’t answer my questions about whether they were still running Close Pass, Zig Zag or Top Deck, or whether they’ll resume at any point. They didn’t explain what went wrong with the February incident, or why their social media presence has changed, only that they still find time to use social media and offer advice through the @TrafficWMP account.

None of this is clear, and Twitter is only a window, it isn’t the full picture. However, there are concerns things may have rolled back years in what was once the forefront of evidence-led roads policing. No doubt they are still doing great job catching criminals on the streets, but that surely shouldn’t be instead of policing people who directly endanger those who cycle and walk on those streets. It is certainly concerning if safety initiatives for cycling may have hinged on just one or two officers, instead of being embedded into everyday roads policing.

Update: road.cc is delighted to see not one but two 'close pass op' updates from West Mids Police in the three days since this blog was published. That gets a thumbs up from us.

#RHPT have been braving the wet and windy conditions to conduct further #OpClosePass today on Bloxwich High Street. Total of 9 drivers spoken to about the dangers of close passing using fabulous literature and mat supplied by @WeAreCyclingUK bike supplied by @BCRbirmingham pic.twitter.com/V7MgfvwzWV