Too posh to bush: bikepacking (with a tent) on the Isle of Wight

Not tempted by the idea of setting up a bivvy under a hedge, VecchioJo goes 'glampacking' within tent on the Isle of Wight

Beds are nice, beds with heated blankets are nicer. Warm, heated beds when you could be shivering in the woods are bloody lovely.

> Your complete guide to bikepacking

I’ve done a fair bit of bikepacking, and have often very much conformed to the stereotypical image when it comes to wild camping by getting ready for a mainly uncomfortable and chilly sleep by unfurling the bivvy bag in the woods under the stars, or under a hedge. I’ve also snuggled down in churches, and next to churches, and in church porches, and in the corner of graveyards. People tend not to hang around churches at night, so they’re a great place to get your head down unnoticed and unbothered, and any meandering goths generally keep themselves to themselves.

I’ve kipped in barns, derelict and half-built houses, on a bench, inside a pizza restaurant and behind some supermarket bins. These all make for good stories afterwards, but not a very good quality rest at the time; and while I love riding as far as possible and laying down somewhere quiet, secluded and out the way, actually having somewhere planned to stay at the end of the day makes life an awful lot less stressful. as you don’t get the threatening darkness panic of trying to find somewhere suitably sheltered to slumber. If that place also has heated beds, a shower, a toilet and a hot tub, that’s even better. It’s not very hardcore bikepacking, but who said that’s how it has to be? And that you need to be miserable in a damp ditch with a slug slowly sliming across your face?

Anyway, I’m getting ahead of myself... I’m back on the Isle of Wight and following Tim Wiggins around again, this time with Claire and Katherine as biking companions. 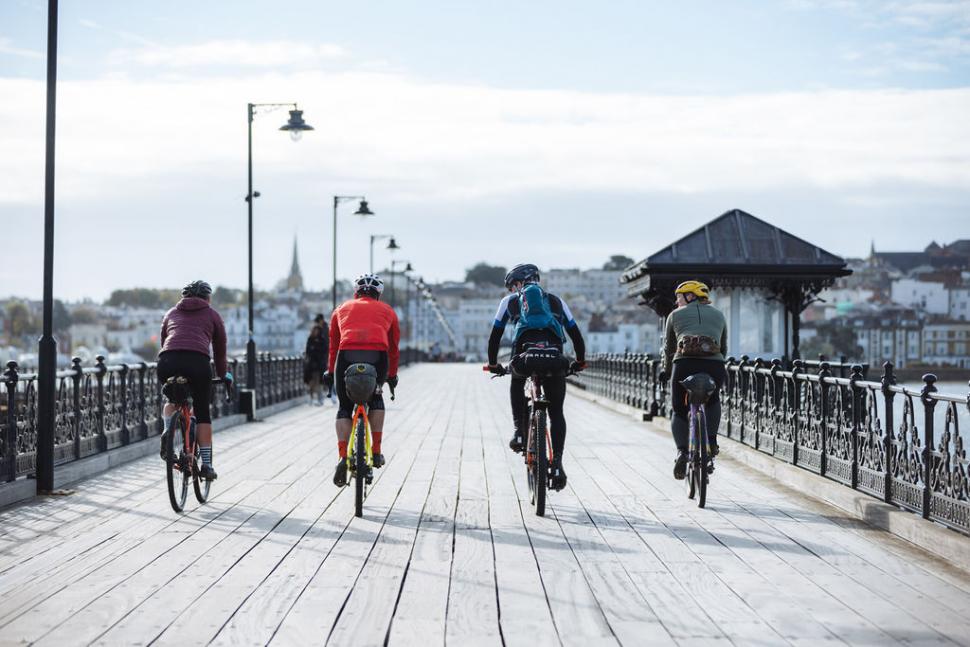 While international travel is still plagued with issues and tedious paperwork, it’s an incredibly easy hop over to the Isle of Wight. Even though the Wightlink Fast Cat from Portsmouth to Ryde ferry trip is only a short twenty minutes long it always feels like going on holiday, and the general quiet, relaxed vibe of the island simply reinforces that.

Pedalling down Ryde pier always feels like the perfect start to a little adventure too. I’ve ridden with Tim before (see here) a few times and he knows every single inch of the island to such an extent that it’s difficult to know whether where we’re going is planned, or he’s just making it up as we go along; I suspect it’s a mixture of both.

With Tim in charge it’s a relief to leave the GPS behind, empty the head of route and snack stop responsibility. There's also no poor route-planning ride through an ankle-deep quagmire moment because I can just trust in his tracks. Tim never disappoints, and as usual it’s only about half a swift mile before our tyres are crunching over gravel. 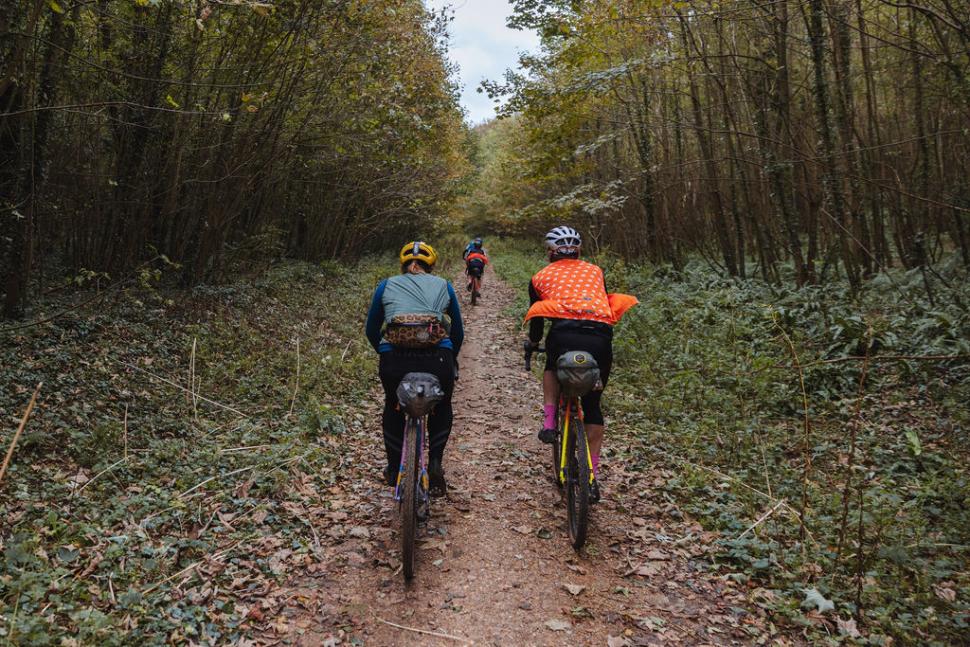 It’s slightly damp gravel as recent rain and general autumnal weather mean that a lot of the paths we wiggle along are moist and puddly. The thin layer of greasy mud encourages a lot of tongue-out concentration throughout the weekend, and a short stretch of off-camber green Teflon chalk prompts giggles all round as we’re-meant-to-be-good-at-this riders slide off into the bushes on the most innocuous looking trail. If your comprehension of gravel biking is miles of straight flat universally graded roads, then you’ll need to look elsewhere. It’s far, far more fun here. 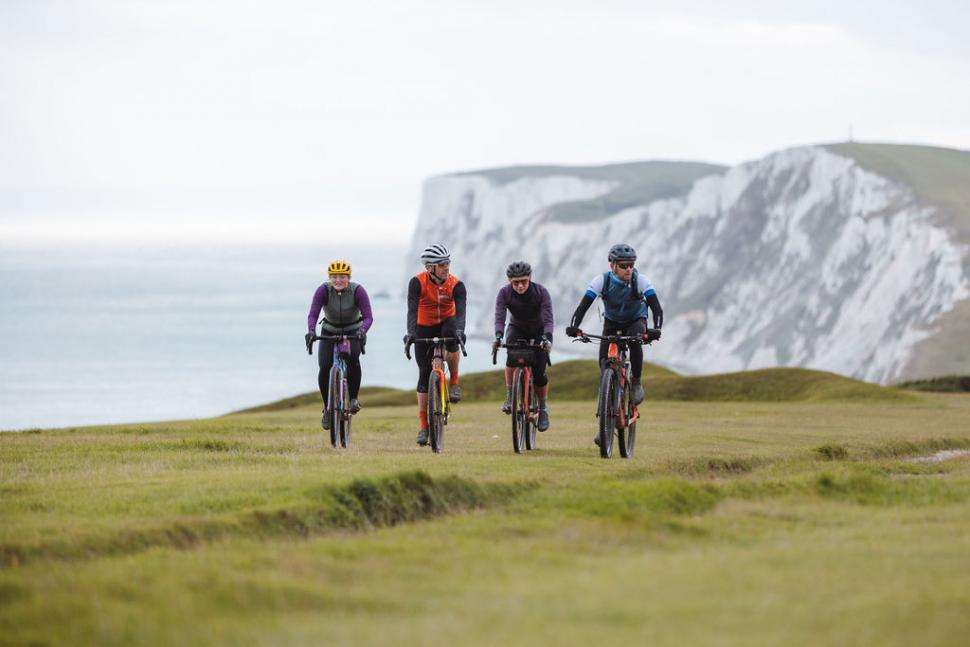 The island is amazing in that you can cover a wide variety of differing terrains in an incredibly small area: chalky downland, sunken rooty tracks, quiet lanes, concrete roads to the tops of hills, leafy woodland, sandy paths, rutted tracks, wiggly singletrack, field edges and grassy clifftops make for an in-no-way-boring surface smorgasbord. 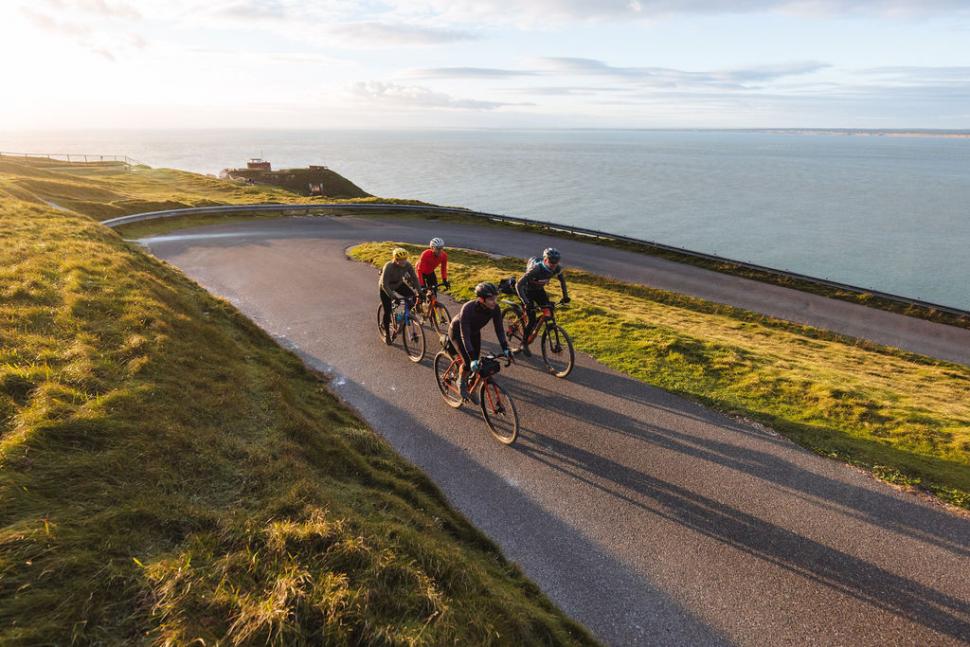 Knowing that we’re staying overnight somewhere nice also means we can do this ride without being laden down with sleeping gubbins, which can easily fill a chunky handlebar bag. One less bikepacking package make the many ups and downs of the day merely a bit of an effort rather than a grunty struggle.

The island is surprisingly hilly despite it being off the edge of down south, where everyone knows it’s flat. A spine of chalk hills sprawl along its southern edge, and if Tim’s in the mood he can guide you up some right little knee crunchers. For these couple of days he seems to be in a benevolent mood, but that doesn’t mean we don’t have to grind our way over a few lumps.

His drunk spider’s web route ensures we never really know where we are, and as we’re on an island the coast could be a north one or a south one, and we could be heading east or west... or we could be suddenly dropping from an empty hillside into a large town for a coffee and sandwich at Caffe Isola (I think that was Newport) and then falling down a hill to a village store I recognise for stocking the biggest fondant fancies you’ve ever seen (colour co-ordinate them with your outfit if you can) and a perfectly-timed puncture. 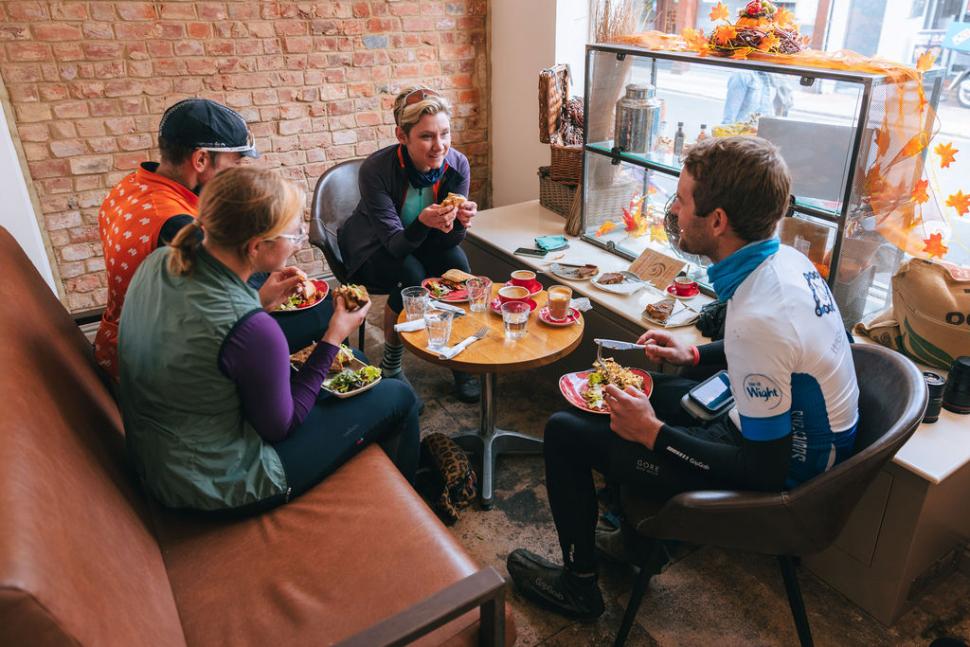 The pace for the day lifts a little as we’re aiming for The Needles at the sinking of the sun. As this is on the most western point of the island, there’s nothing much between us and the horizon. It’s a belter of a view, if you can ignore the wind. 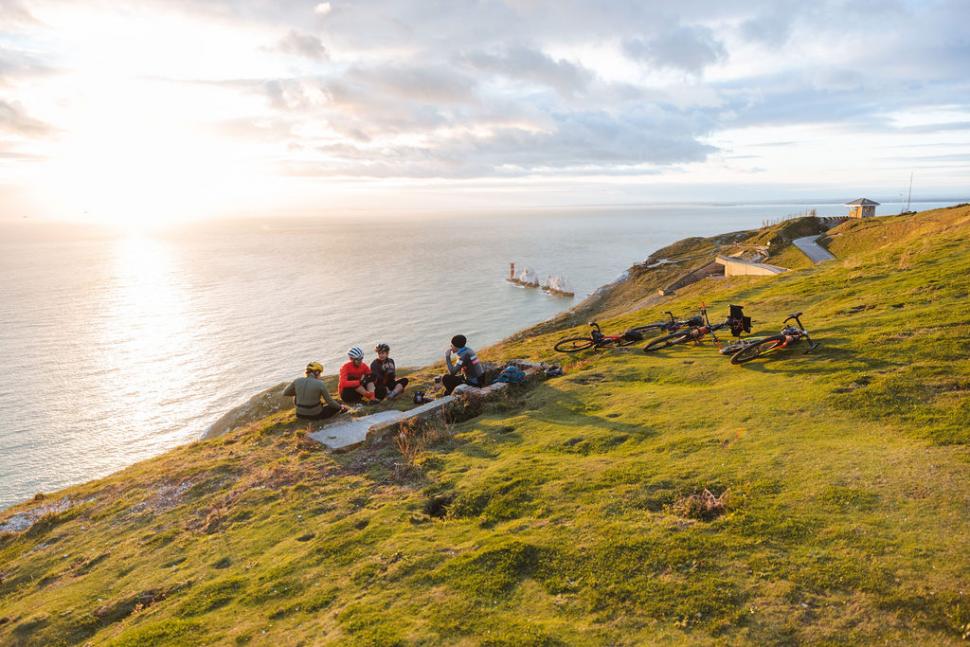 We add a tick to our bikepacking bingo card by making a coffee there; Tim has already marked his card by having a tin mug dangling off his rear bag, which only tinkles annoyingly a couple of times.

We then have to hightail it against the darkness to our overnight stay. We’re booked into a safari tent at Tapnell Farm, which is really rather fancy for a tent; a small house with heavy fabric walls really.

There’s an open plan front room/kitchen, with a galley bed to the side. In the back are two further bedrooms, and beyond them a shower and toilet. Out front there’s a veranda and a hot tub. I’ve lived in smaller and less luxuriously equipped flats... no, really! There are only four of us but there’s room for eight in here should you wish, so we fill up the extra room with bikes.

As it’s a bit chilly it’s very nice to be indoors, and if the weather was more seasonal it would have been a small slice of heaven. It’s very nice to have a quick shower, use a towel and be clean and in normal clothes sitting in a chair than a bit cold and damp and accidentally reclining onto a nettle. We hadn’t even discovered the beds with the heated blankets yet. 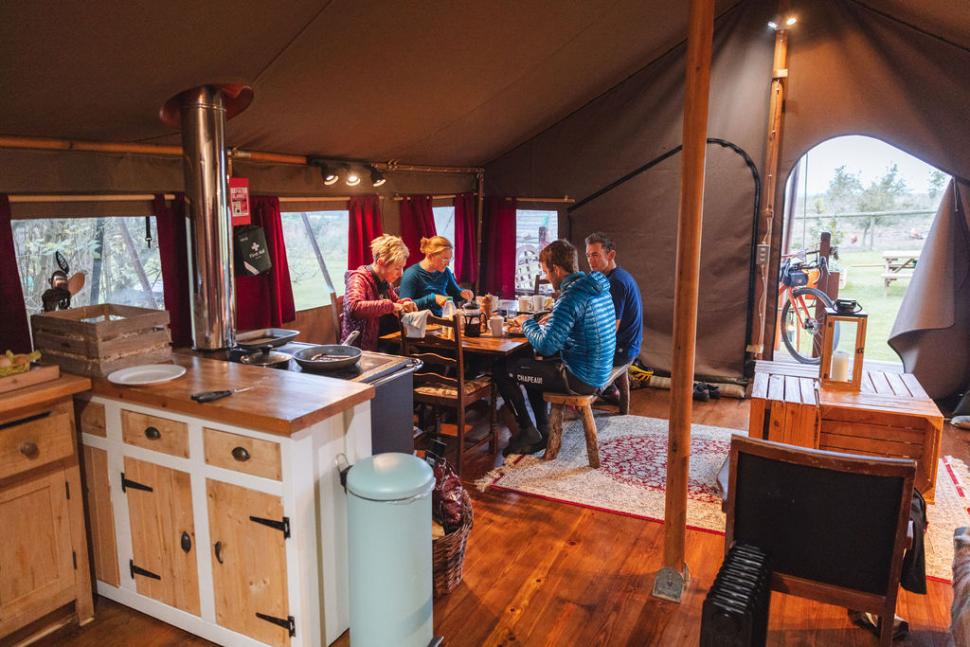 The romance and self-sufficiency of living off what you ride past, sitting on a petrol station forecourt for supper and pocketing some midnight snacks, then making a coffee on top of a hill as dawn breaks and grabbing breakfast somewhere a few miles down the road at the first open bakery you see is a large part of the lifestyle and inverse glamour of bikepacking. That said, being able to amble up the hill in the evening to a nice warm building for a burger and chips and a beer isn’t something to be sniffed at. Then waking up nicely rested after a proper sleep to a breakfast hamper full of sausages, bacon, eggs, mushrooms and tomatoes all cooked on a wood-fired range with toast, orange juice, tea and coffee is a bloody wonderful way to start the following day... sorry bikepacking instagrammers. 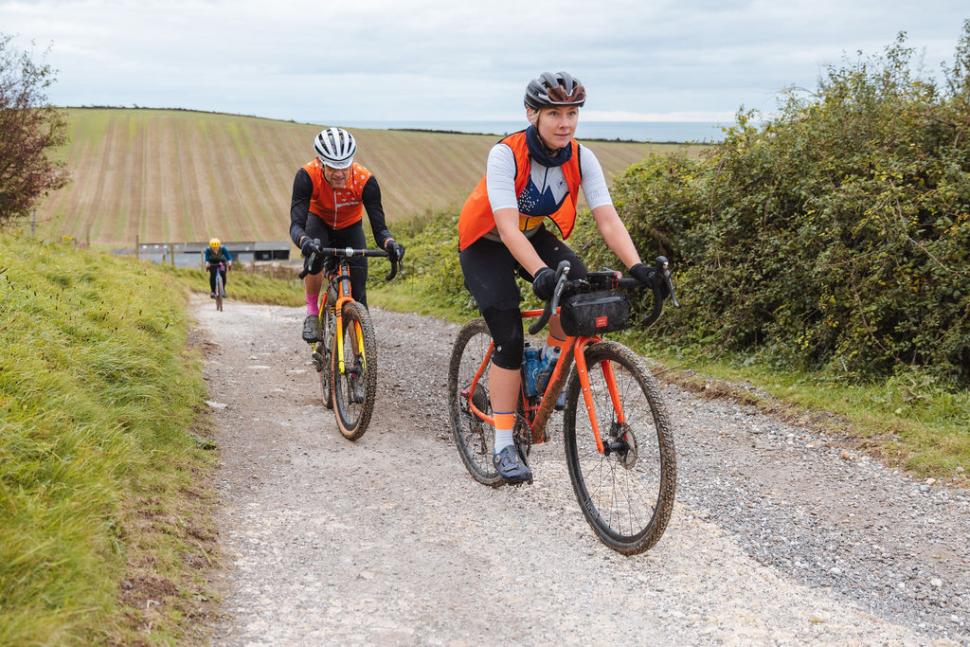 Of course this makes the first hill of the day a bit burpy, and we’re still pretty full when we wheel into the lunch stop at the island’s famous Garlic Farm, so we opt for light snacks and salads for lunch.

What’s happened to us, is this even a proper bikepacking trip any more? Well, yes, thanks to the generally disappointing and wet summer and the recent dump of quite a hefty storm, some of the paths push our gravel bikes to the edge of their ability, and that’s where the fun is found. When the adventure is all under your tyres you don’t have to travel far.

Sunken paths had briefly become mini floods, which has stripped them down to bedrock with rivers of ruts to negotiate. In other places all that was once on the trail has been washed down the bottom to form pools of deep, wheel-grabbing sand. 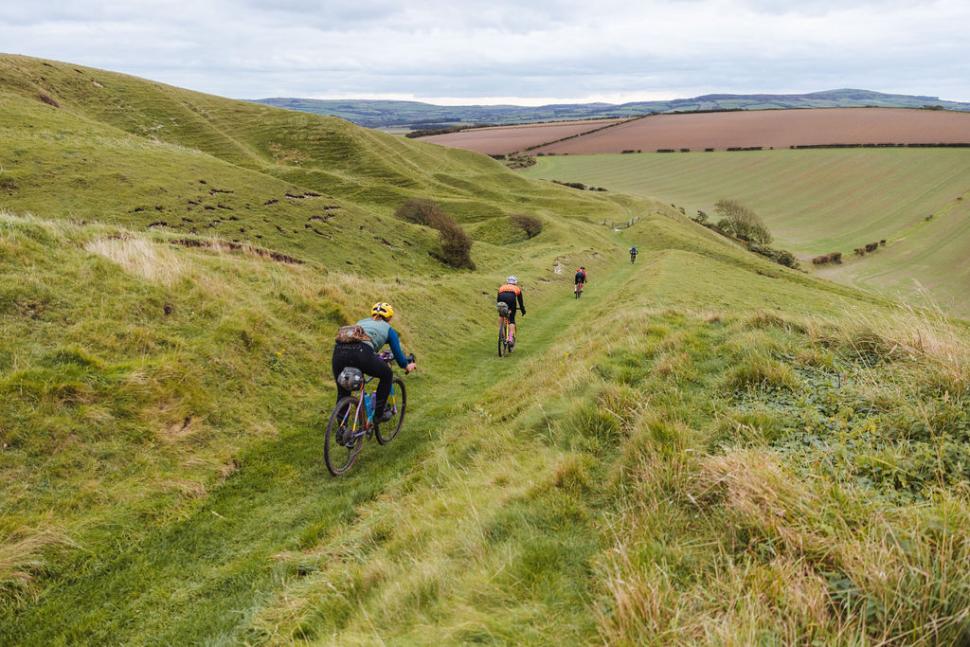 While #outsideisfree is nice to experience (if we exclude the obvious cost of a bike, and the bags, and all the expensive thermal down-filled waterproof kit stuffed inside, and tin mug) it’s fine to pay for comfort once a while. Not everything has to be a microadventureepic; you can have a lovely time riding your bike without it being a self-imposed ordeal, because #insideiswarmanddry.

The next time I’m hunkered down wearing all my clothes inside a thin, rustly, overpriced waterproof bin bag, the thought of that heated bed will keep me warm for the two minutes it takes me to slip into an uncomfortable sleep and dream of sausages...