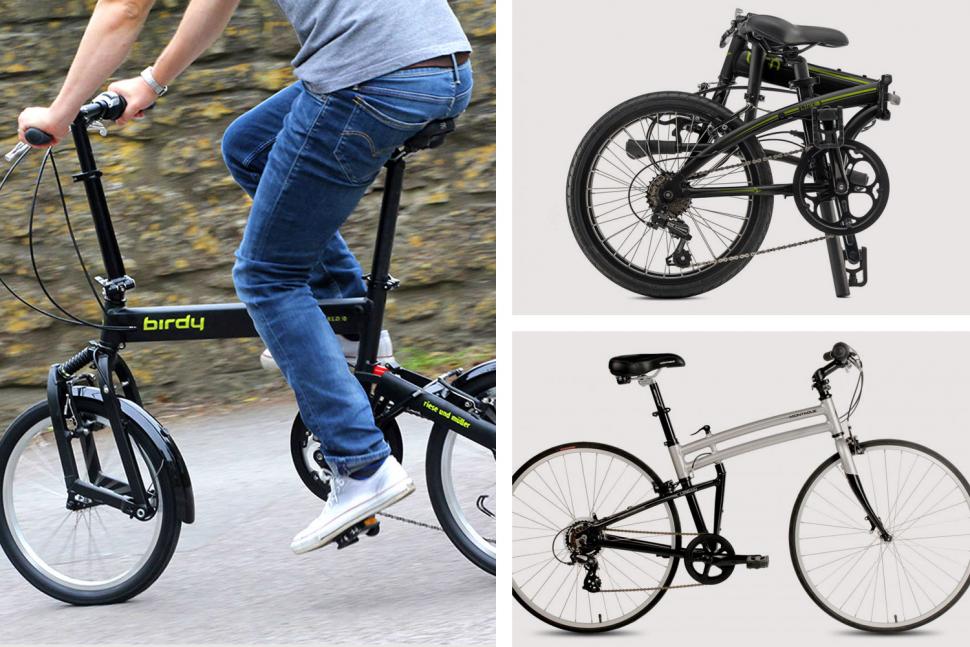 Once derided as cheap, nasty and heavy, folding bikes have rocketed in quality over the last couple of decades as commuting cyclists have demanded nicer-riding and better-folding options. Considering a folding bike? Let’s have a look at your options.

Welcome to the latest edition of road.cc’s buyer's guide to folding bikes in which you’ll find everything you need to know to find the right folding bike for you, plus our pick of five of the best folding bikes.

5 of the best folding bikes

The range of available folding bikes is large, and all they have in common is that, one way or another, they can be compacted into a smaller package without tools. There are large-wheeled and small-wheeled folding bikes, folding bikes with gears, one-speed folding bikes and folding bikes made from just about every material you can think of. Let’s rake a closer look.

What are folding bikes for? 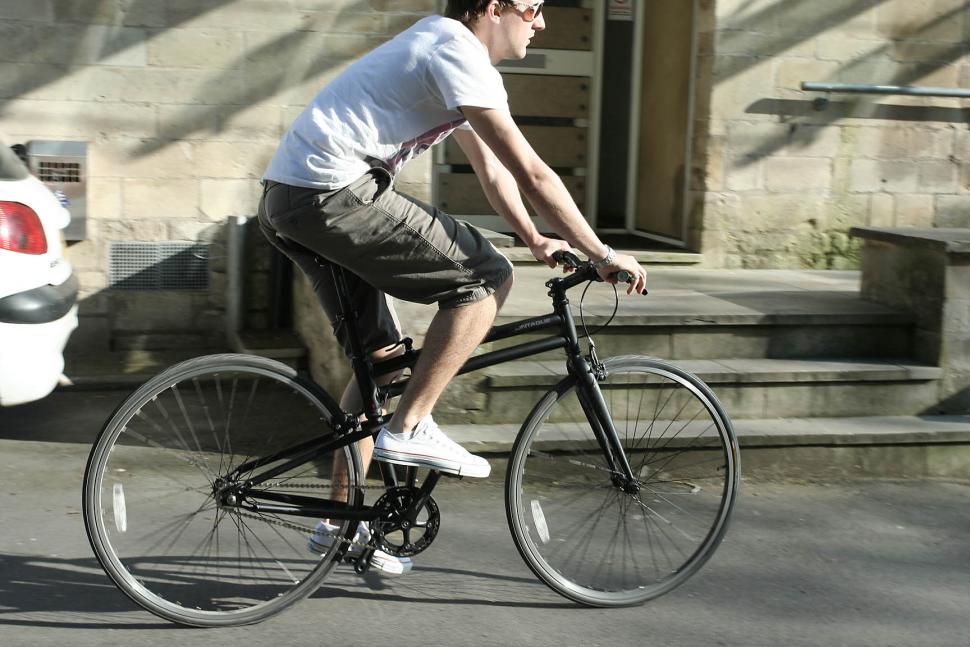 folding bikes appeal to riders who need a bike that’ll fit into less space than a regular bike. Wonderful as they are, conventional bikes take up a lot of room and that makes it hard to store them in a small flat, transport them on a peak hour train or any sort of bus, or park them inside most offices. Get a bike that folds and all these things become possible.

The main use for folding bikes, then, is commuting, and especially commuting that involves a section of another transport type. Hand out at any major central London rail station for a while and you’ll see hundreds of folding bikes being assembled as their owners get off trains and head into the traffic.

That means modern folding bikes are being folded, carried and unfolded far more often than the cheap folding bikes of yesteryear, and that demands better quality of folding hardware, and lighter weight, or at least a folded design that lends itself to being carried. Unlike the old Raleigh Shopper, which was really only intended to fold enough to fit in a car boot, these bikes have to be easy to carry up stairs and along station platforms. 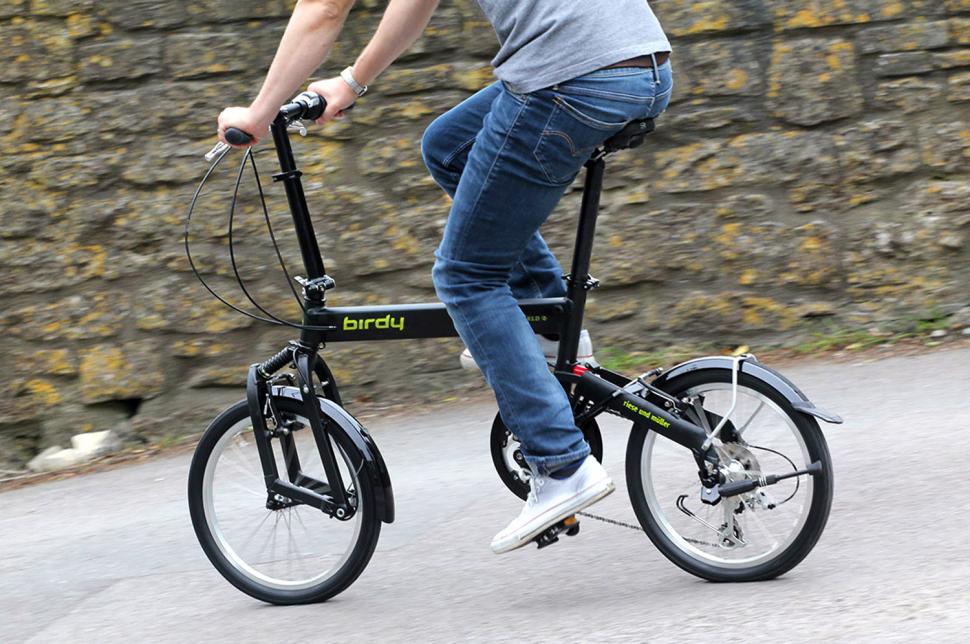 A good folding bike costs at least as much as a decent road bike, and in some cases more, but if the alternative is catching a bus or the Tube, it will soon pay for itself, especially if you can use the Cycle To Work Scheme to spread the cost. Bung even a £800 folding bike on Cycle To Work Scheme and in many cities, you'll be better off. Compared to a London Zone 1-3 Travelcard at £153.60 per month, a £192.00 Bristol City peak travelcard or a Cambridge Megarider Plus bus ticket for £96, the repayments for a folding bike are trivial.

That means these bikes fold far more extensively, thanks to features like folding pedals, folding handlebars and extensible seat posts. To keep weight down, frames are aluminium, or good quality chromoly steel.

To explore your folding options, let’s look at a few popular folding bikes. We've restricted this to bikes we've tested; if you have a favourite folding bike that deserves inclusion, tell us in the comments.

Read more: Beginner's guide to bike types
Read more: How to choose and buy your next bike
Read more: The road.cc A-Z of cycling jargon This is a very decent folding bike at a sensible price. The fold is straightforward and while it doesn't end up as compact as some folding bikes because of the slightly larger wheels, they do help it roll along nicely without being as affected by potholes. 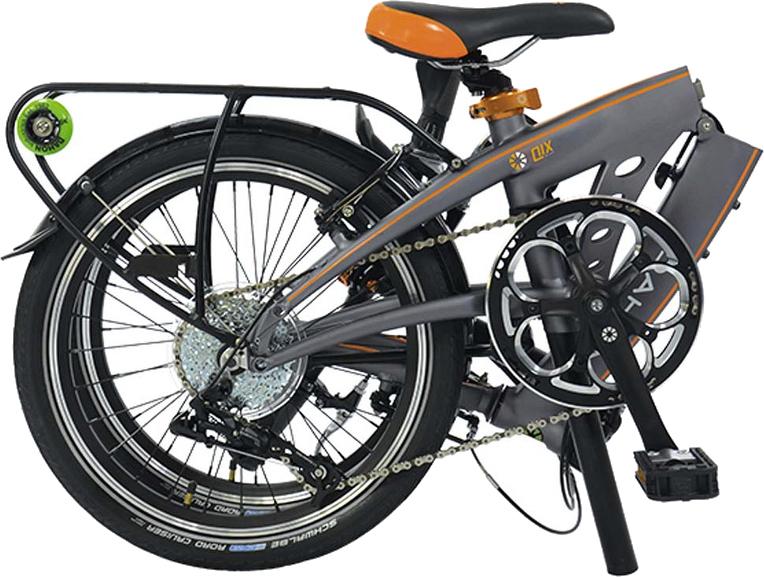 The parts are all good quality, and it's nice to see a rack and mudguards included; they make it a much more practical round-town proposition. 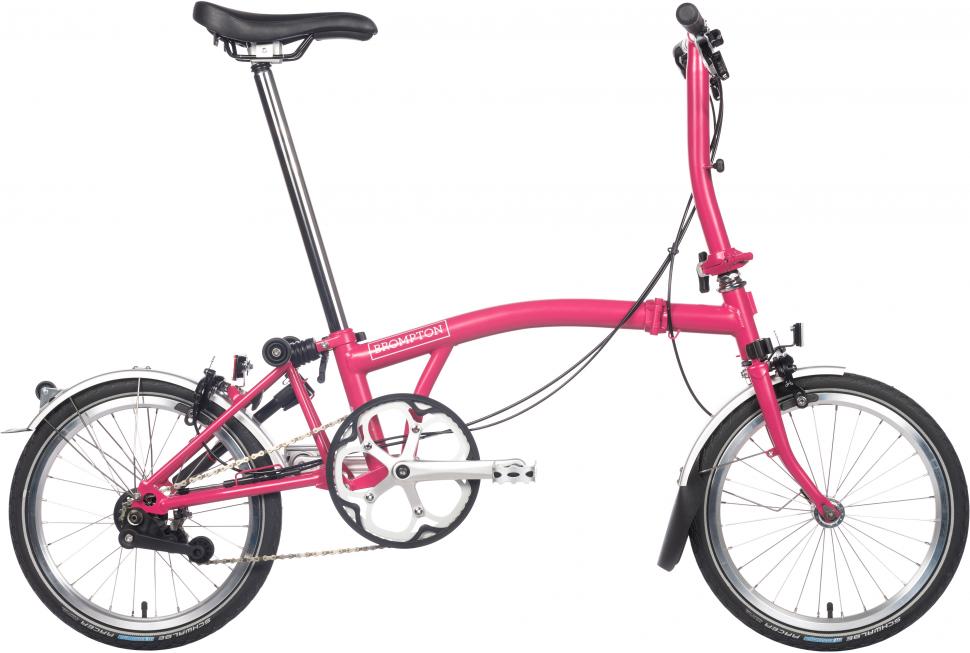 The greatest British bike industry success story of the last twenty years, the Brompton has become almost synonymous with folding bikes to the extent that it’s even featured as the object of affectionate humour in the BBC’s self-parody W1A:

The Brompton has become wildly popular, selling over 40,000 a year and making the firm the biggest British bike manufacturer, because of its clever folding process. It shrinks in seconds so it’s only a bit bigger than its 16-inch wheels.

The key features that make the Brompton’s fold work so well are the combination of a frame hinge and folding handlebar; the rear triangle that tucks away under the frame; the folding pedal; and the long seatpost that vanishes into and through the frame to hold the compact package together. But designer Andrew Ritchie’s great achievement was making all these elements work together so that a folded Brompton is small and easily carried, but rides well when unfolded. While Ritchie’s original 1981 patent has now run out, Brompton uses copyright and industrial design law to defend it from attempts to clone the bike. 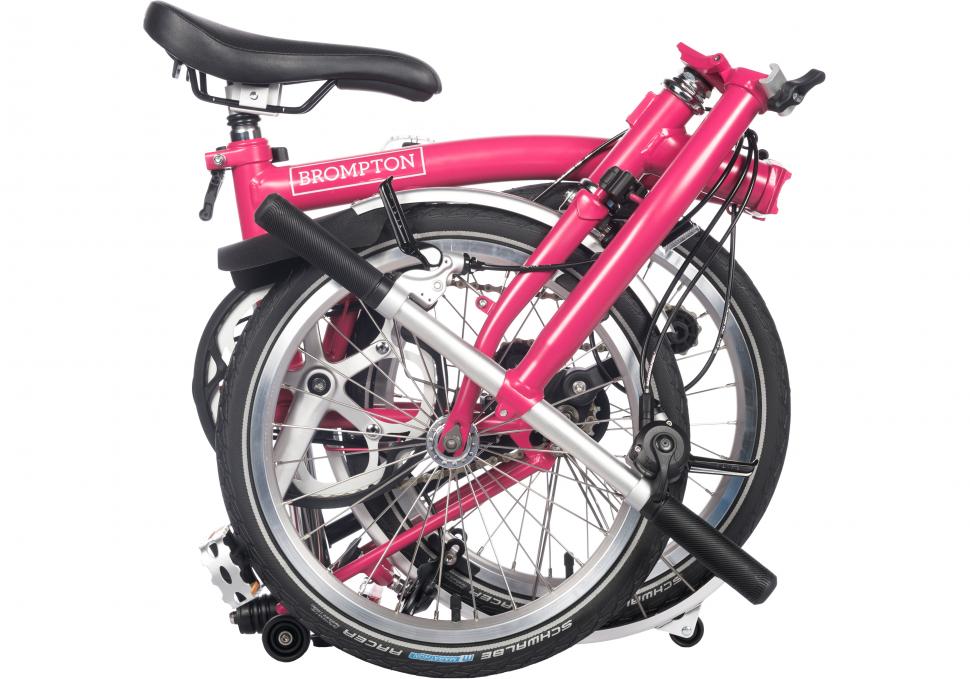 With a starting price of just under £800, a Brompton isn’t cheap, but as mentioned above, it’ll pay for itself within a year in many places. 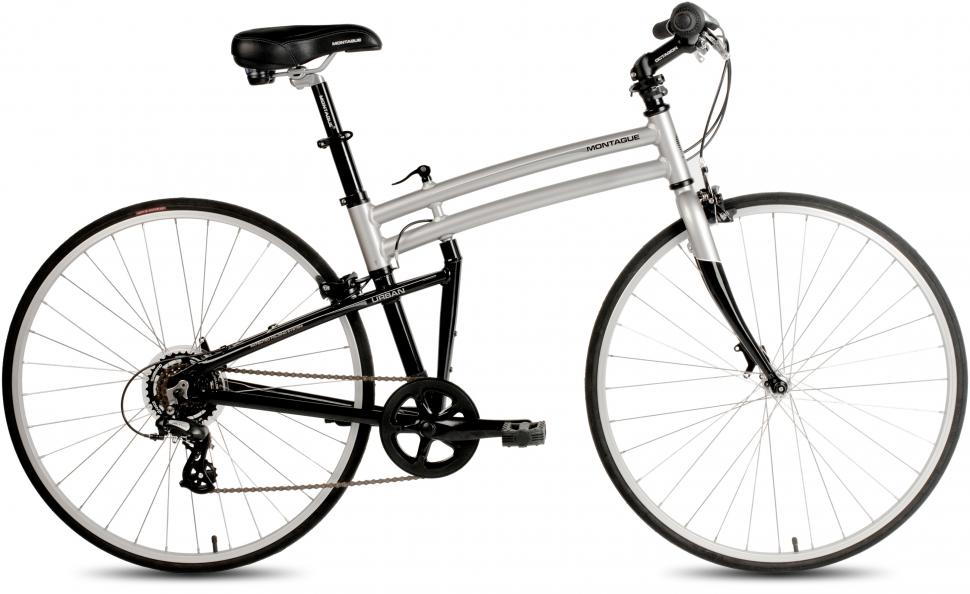 Montague makes a range of folding bikes with 700C or 26-inch wheels, starting with this 7-speed machine and going all the way up to the £2,500 SwissBike X90, which is billed as a high-performance folding hardtail mountain bike.

We’ve reviewed the slightly more expensive Boston singlespeed and liked it, but although some of the parts are downgraded here, the derailleur gears probably make this a more practical proposition for most riders. folding bikes are always a compromise between the folded package and the ride characteristics. It's not a straight line correlation but the basic rule is that the bigger-wheeled bikes are easier to get on with on the road, but not as easy to hoik onto a train. They don't get bigger wheeled than the Montague: this is a full sized 700C bike, so don't expect it to fit in your glove box.

Usually when you're talking about a folding bike there's plenty to say on the subject of how the fold affects the ride, but not here. We wouldn't advocate riding blindfolded but were you to try it you'd be hard pressed to tell this was a folding bike, there's nothing to give it away. The mainframe is nice and stiff without being overbuilt to compensate for the fold, the geometry and riding position completely normal with a fairly upright stance that's just about right for shortish town journeys.

Read our review of the Montague Boston 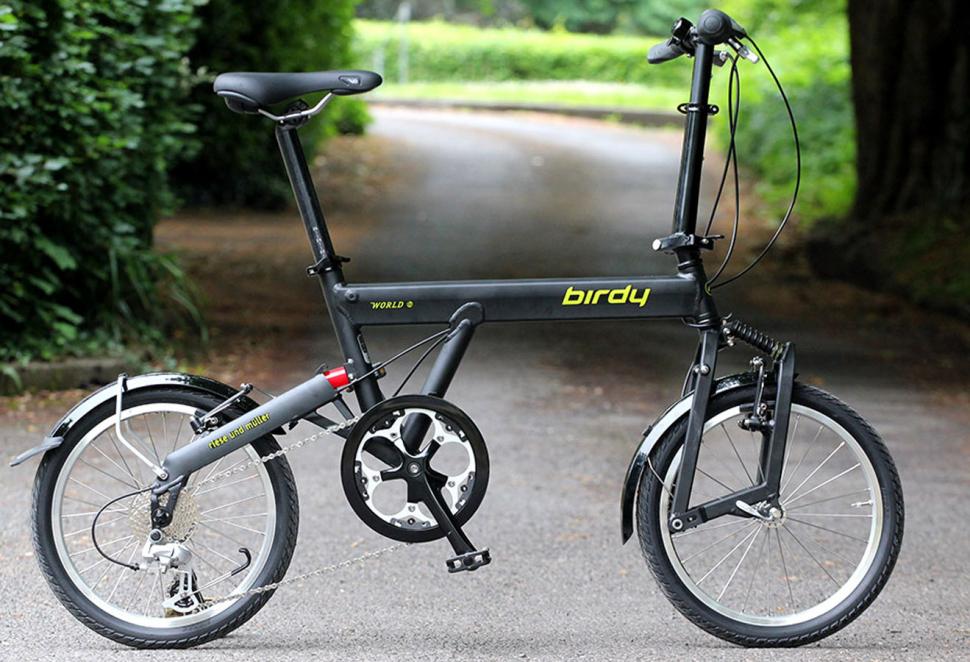 The Birdy World Sport is a more versatile folding bike than similarly priced compacts like the Brompton. That's not to say it's better: the Brompton beats it hands down as a bike-rail commuter. It's not the best folding bike for touring or training rides either; that would be an Airnimal of some description. But it's a jack-of-all-trades folding bike that does all jobs well.

Like other Birdies, the TIG-welded aluminium frame and fork of the World Sport are unusual in a couple of respects. For one thing, there's no hinge in the main frame. That saves weight and, more importantly, eliminates flex. For another thing, there's suspension at both ends. The wheel size is a rather unusual 18-inch, but there are a few good tyre options available, mostly from Schwalbe, but the Birdy's ace card is its ride quality. It rides better than any other folding bike with wheels 20-inches or smaller in diameter. There's enough reach that you don't feel perched on it, the frame doesn't flex, and there's enough trail that it doesn't steer like a shopping trolley. You can race down descents at over 40mph and the World Sport still feels stable and safe, something that can't be said for all folding bikes.

Read our review of the Birdy World Sport 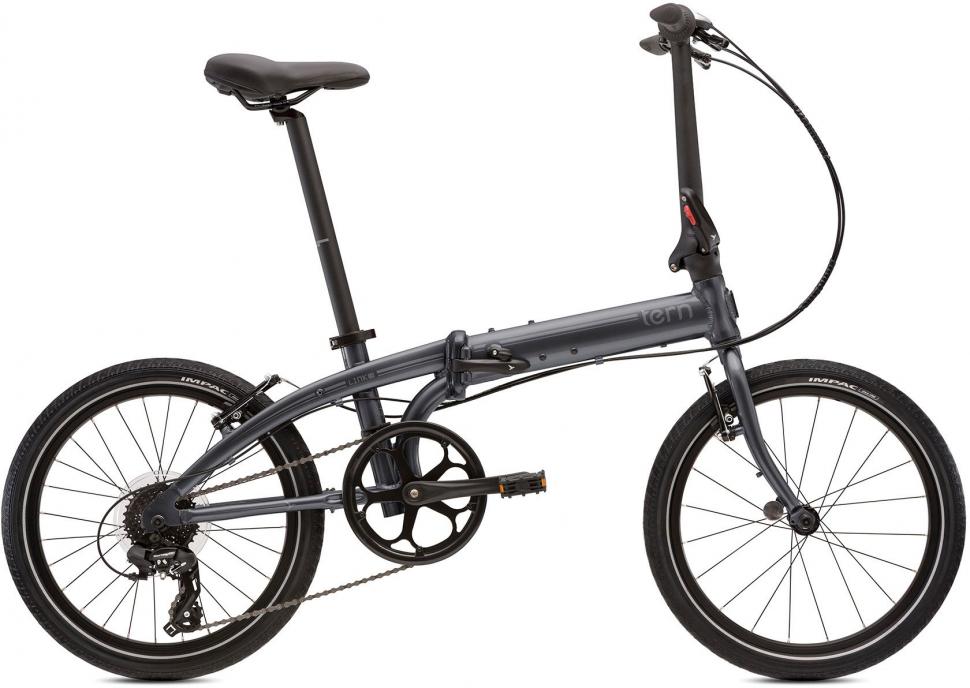 An excellent budget option, the Tern Link has an aluminium frame with what Tern calls an N-fold to compact it.

Folding the Tern Link is straightforward; it's not the collapsible magic trick of a Brompton or Birdy. First you deploy the kickstand, which enables the bike to stand up both now and when it's folded. Then lower the saddle all the way down. (Shorter riders might be able to lower the saddle later, but I found it hit the handlebar unless I did it at this point.) Then undo the main hinge and 'N-fold' the front end back, so that the Magnetix clips on the righthand fork leg and lefthand chain-stay butt together. Undo the stem hinge and drop the handlebar down against the front wheel. There's a rubber strap under the main frame tube to secure the stem – simple but effective. Fold the pedals and you're done. 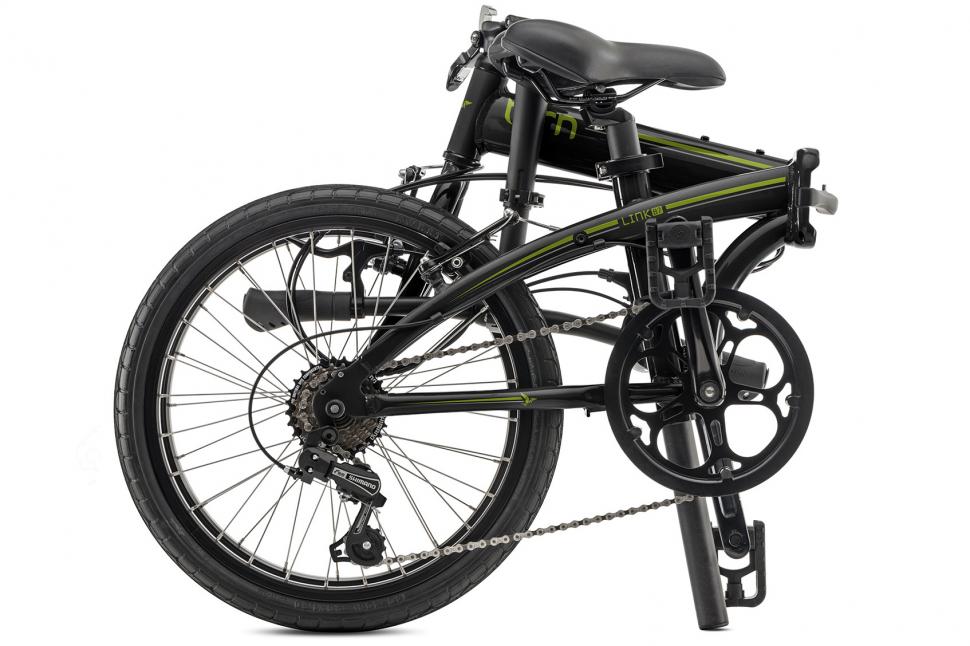 The resulting package is bigger than a Brompton but still small enough for train's luggage rack. It's lighter than it looks and no more difficult than an entry-level Birdy or Brompton to carry. It’s best carried by the saddle as when carried by the main frame tube, it tends to flop open around the main hinge. The magnets holding it together aren't that strong.

If you don't like the idea of carrying the Link, for £40 more you can get the model with a Trolley Rack. This is a rear rack with castor wheels on it, so you can tow the folded Uno rather than carrying it. This rack includes a cover, so the bike looks more like luggage.

We’ve reviewed the now-discontinued singlespeed version, but the folding process is the same for Tern’s Link and Verge ranges; the latter bikes have very nice hydroformed frames.

Explore the complete archive of reviews of folding bikes on road.cc