5 reasons why you should ride in Italy right now

I’m not saying that cycling in northern Italy is perfect at this time of year, but it’s pretty close.

We get to ride in a lot of cool places here on road.cc, but Italy in the (just about) springtime takes some beating. I headed out for the weekend with new bike brand Deanima Cicli. Chances are that you’ve not heard of Deanima before. We’ll have exclusive news on their Gianni Pegoretti-built carbon road bike, including a First Ride, here on road.cc when they launch their website in a couple of weeks (you can follow them on Twitter already). 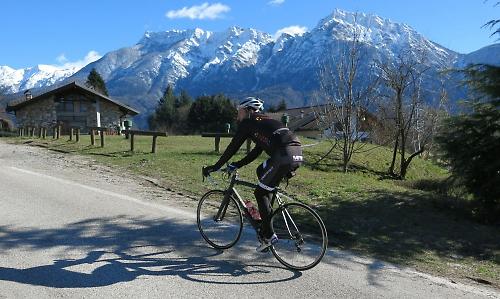 I went out to get the full story behind the brand, to see the bike being made and, of course, to ride it. We had an afternoon’s ride near Trento and a longer ride alongside Lake Como. Here are five reasons why you need to do something similar this spring…

We did a couple of brilliant climbs. First up (literally), we headed from Lago di Caldonazzo to Compet. The Giro d’Italia will take riders up here on 29 May. We didn’t do a long ride, just a flatish warm up out to the start of the climb and then the ascent. 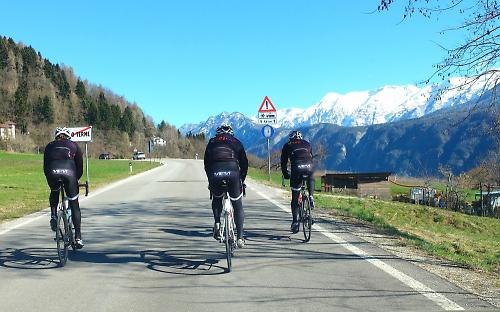 At 1,383m above sea level, Compet isn’t high by European standards, but it’s still 39m higher than the summit of Ben Nevis. You get hairpins, you get steep bits and not-so-steep bits, you get stunning views, you get tired… and there’s always something special about climbing up beyond the snow line. You boil on the way up, at the top you get a cup of coffee (see below) and sling on all the extra clothing you’ve managed to carry, and you freeze on the way down until you hit the warmer air. Perfect. 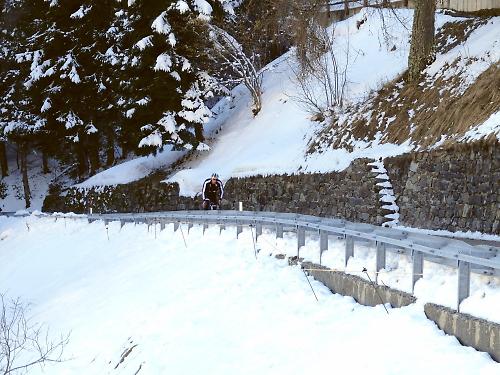 The last half mile or so through the trees was pretty sketchy because of melting snow on the road, and even more so on the way down, but that’s all part of the fun… as is seeing how fast you can rail the switchbacks. 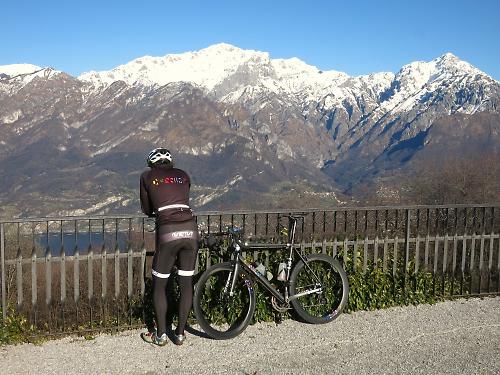 The other climb we did was the famous Madonna del Ghisallo alongside Lake Como, a fixture of the Tour of Lombardy and often in the Giro d’Italia. At 754m, the pass isn’t that high but try explaining that to your legs and lungs on the way up. You love it and hate it at the same time. It’s one of those climbs you just need to do some time in your life, simple as that. 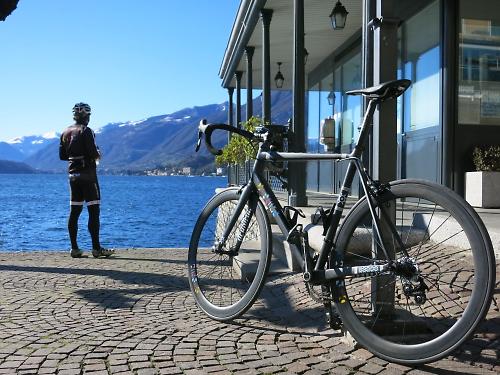 Lake Como is stunning, Lake Garda is stunning, so’s Lake Maggiore and a whole bunch of other Italian lakes. Take your pick. You can’t go wrong, really. Cycling alongside them is good for your soul. Something like that, anyway. Don’t get me wrong, we’ve got some amazing scenery in the UK, but when it comes to vistas, Italy rocks. Cycling is easier when you have those views. And just better. 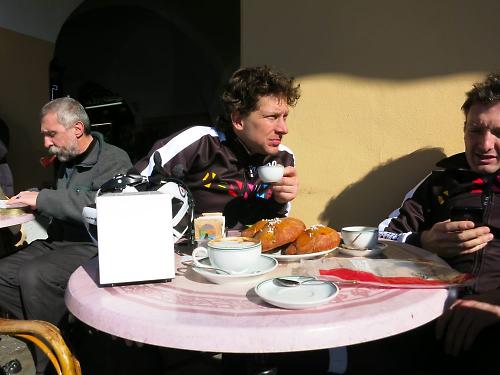 The Italians are good at coffee, and we all know that cycling and coffee go hand in hand. If I had to pick fault, I’d say they could be a bit more generous in terms of quantity, but you can’t argue with the quality. 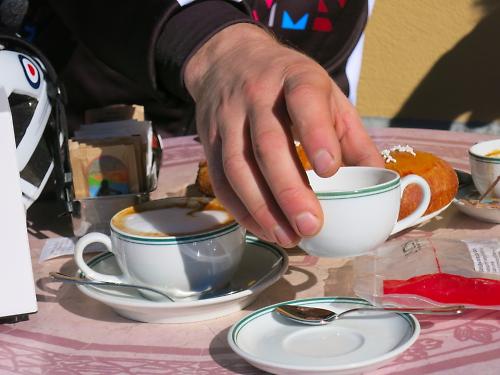 They’re also good at pretty much everything else food and drink related, of course – cake-type stuff, pasta, cheese, pizza, ice cream, wine… and it all has cool names. 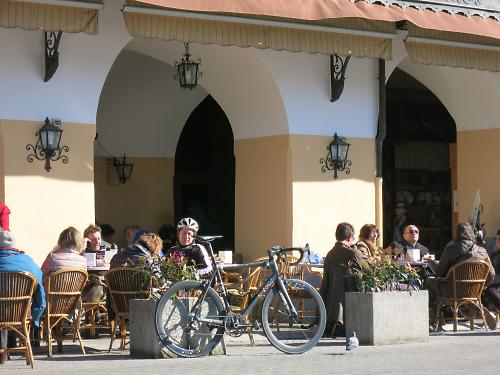 Plus, all of this tastes better outside in the sun, especially once you have a few miles under your belt. Science has yet to prove why this is the case (the boffins are still arsing around with the Large Hadron Collider and stuff like that), but it’s true. 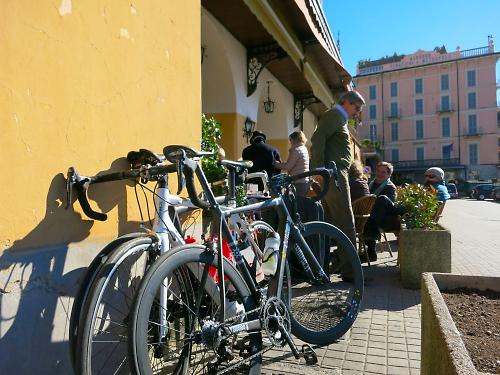 You couldn’t say that good weather is guaranteed in Italy at this time of year because it ain’t, but when the sun does come out to play you’re in for a treat. 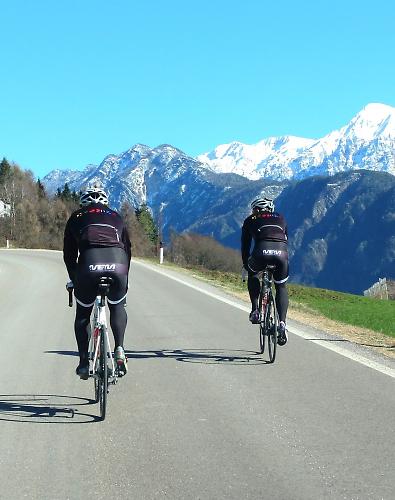 Plus, although you might not like to admit it, everything is even better if you know that people back home are having to put up with drizzle, storms, sleet, blizzards or whatever. Sorry, but that’s just the way these things work. 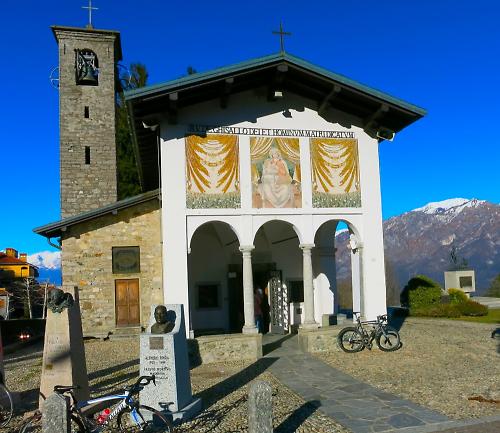 God knows, I’m not religious and I’m sure as hell not Catholic, but any country that reveres cycling enough to have a chapel dedicated to La Madonna del Ghisallo, the Patron Saint of Cycling, is good enough for me. It’s at the top of the Ghisallo climb, of course.

There are busts of heroes of the sport like Alfredo Binda, Fausto Coppi and Gino Bartali outside, and an incredible amount of cycling history inside. The chapel would make a whole feature in itself. 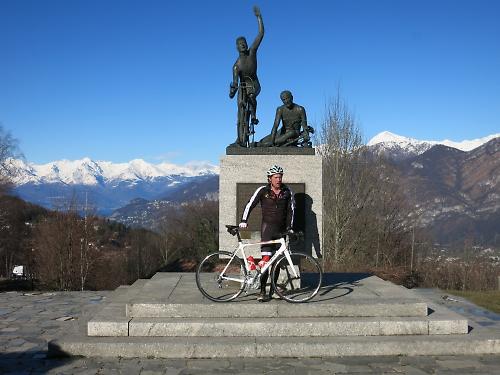 You won’t necessarily be treated perfectly as a cyclist in Italy but – and I know this is a gross generalisation – Italians get cycling. Maybe I’m being a bit of an idealist here, but that’s the way I read it, anyway.

Look out for our story and a First Ride of the Deanima bike here on road.cc in a couple of weeks. In the meantime, here’s a pic of what to expect… 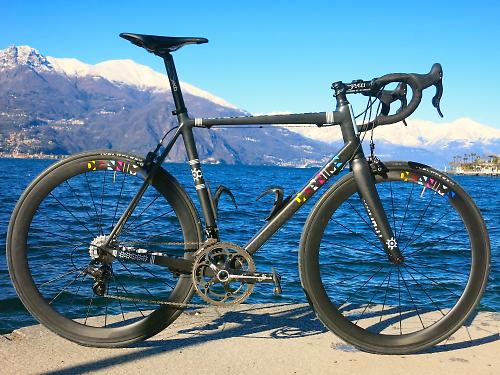