We are reaching the end of our week on the Danube Cycle Way (Donauradweg to the locals) and a strong pattern has emerged. We’ve spent the first part of every day pedalling along some truly superb town cycle paths, with no hint of ever feeling harassed by traffic or unwelcome.

This before quite quickly passing through an urban hinterland to emerge onto another stretch of the scenic and relaxing Danube path. In honour of local customs, riding has been frequently punctuated by cake and coffee stops and then beer and sausage stops. Well, it is (mostly) Austria! I’ll be sad when it’s over, but my waistline may not be. 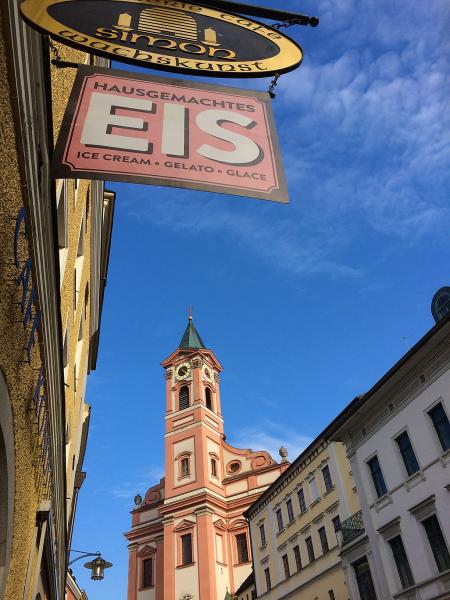 Our journey actually began in Germany, flying in to Munich, then on to the beautiful Lower Bavarian city of Passau. Passau sits at the confluence of three rivers, one of which is the Danube, and it’s the starting point for one of the most popular stretches of the full Danube Cycle Way which stretches about 1800 miles from the river’s source in the Black Forest in Germany all the way to the Black Sea. From Passau to Vienna is a much more accessible 320km, hence the massive number of people – nearly 40,000 – who ride it every year. On our whole trip, in mid-October, we saw about thirty. Early autumn would be a great time to enjoy the scenery without the crowds of mid-summer. 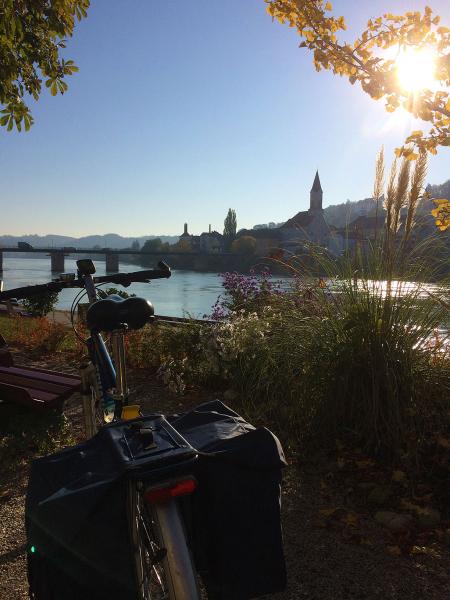 After a pleasant afternoon collecting hire bikes in Passau and cruising around the cobbled streets enjoying a beer or two, it was time for a good night’s sleep before heading out the next morning for the journey to Vienna. For most of the route, there’s a left bank or right bank option, but the incredibly detailed guidebook gives good tips on which side is best from a scenic or route quality point of view. Frequent ferries and the odd crossing point mean you’ve always got the option of changing your mind. On leaving Passau, the route very quickly gained the character it would retain through most of the ride: segregated, flat, cycling paths. 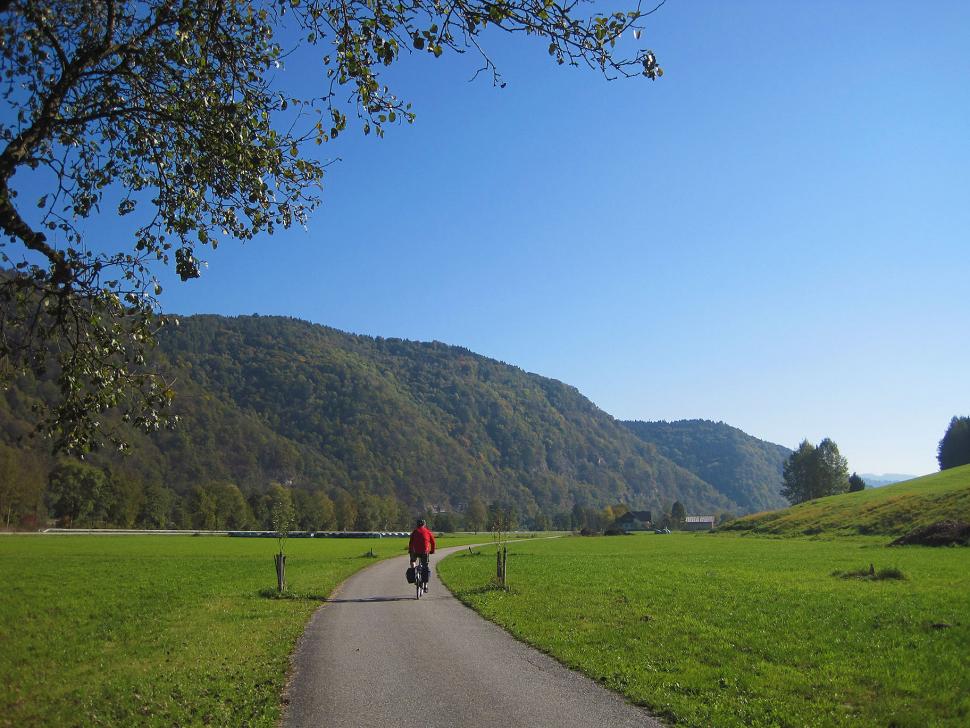 That first day, the autumn sunshine was shining down on us, the air carried a chill but all was well with the world. Chatting constantly thanks to the ability to ride at a relaxed pace, side by side and with a very low volume of traffic passing by, this was one of the most sociable tours I’ve ever done. Picturesque villages were passed through or visible on the other bank, including the marvellously named Pyrawang, and huge river cruisers were a frequent sight, carrying their holiday making cargo up and down the Danube. At the Jochenstein power station, we soon discovered one of the major downsides of the heavy rental bikes (other than a saddle the size of Africa and the sprightliness of an oil tanker): having to push up them up a narrow ramp up several flights of steps to get onto the dam. But from here, we had the unique chance to watch one of those river cruisers going through one of the largest locks I’ve ever seen. Besides, when do you ever get the chance to ride your bike across a river and through a power station! 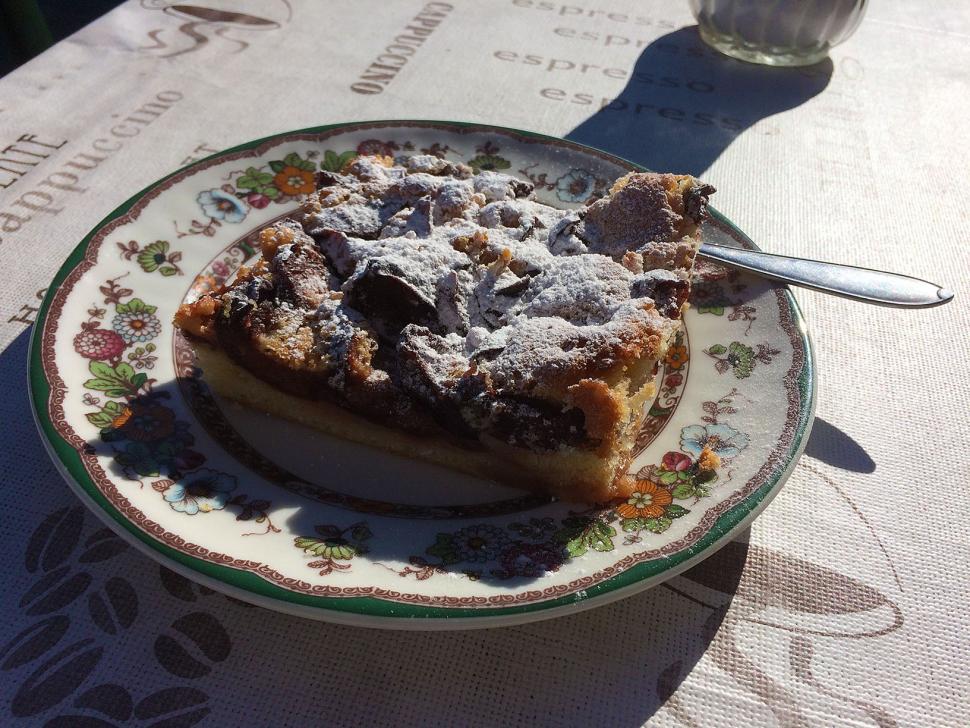 Tree lined paths, in full autumn regalia greeted us on the other bank, and a fabulous cyclists/biker’s café – Hilde’s Radlertreff – in Niederanna. After a relaxed pitstop in the sunshine we were off again, for an appointment with a ferry and the hilariously named Schlögener Schlinge. This famous and very photogenic massive loop in the Danube was caused by a granite ridge that turned the river from its otherwise straight course. Finishing our ride here, we watched the sun beginning its descent behind the hills, gilding the water with that special evening glow. 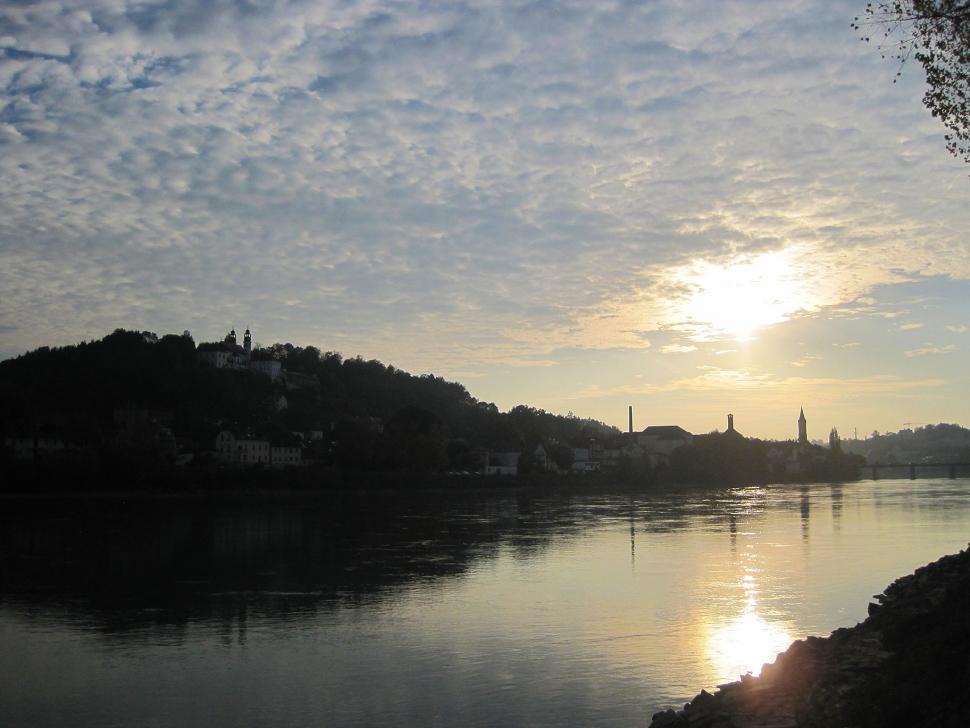 Setting out from the Benedictine monastery town of Melk just a couple of days later, the weather conditions were sadly not quite as benign as that first day. Temperatures hovered around 2.5 degrees and mist hung over the river. We passed signs giving information on local wildlife, including beavers, otters and various types of bird. I’d been told that otters were quite frequently sighted in this area, but sadly they were hiding out the day we passed through. The river cruisers of the Passau area seemed to have been replaced by more industrial looking barges here, but the peace and tranquillity was the same. We decided against the epic ascent up to the monastery at Aggsbach, looming out of the mists on a rocky promontory high above the river bank. If the sun had been shining we might have tackled the 2km detour with gradients of up to 20% Then again, on those bikes, maybe not.

Dusk was just falling as we entered Krems, a UNESCO world heritage site and one of Austria’s oldest cities. It being Austria, there was the luxurious bonus of a sauna at the hotel, a welcome way to defrost after one of the coldest days of touring I’ve ever known. Wandering through the old town later, it wasn’t hard to see how that UNESCO recognition came about. It would be good to explore more the next day during daylight. 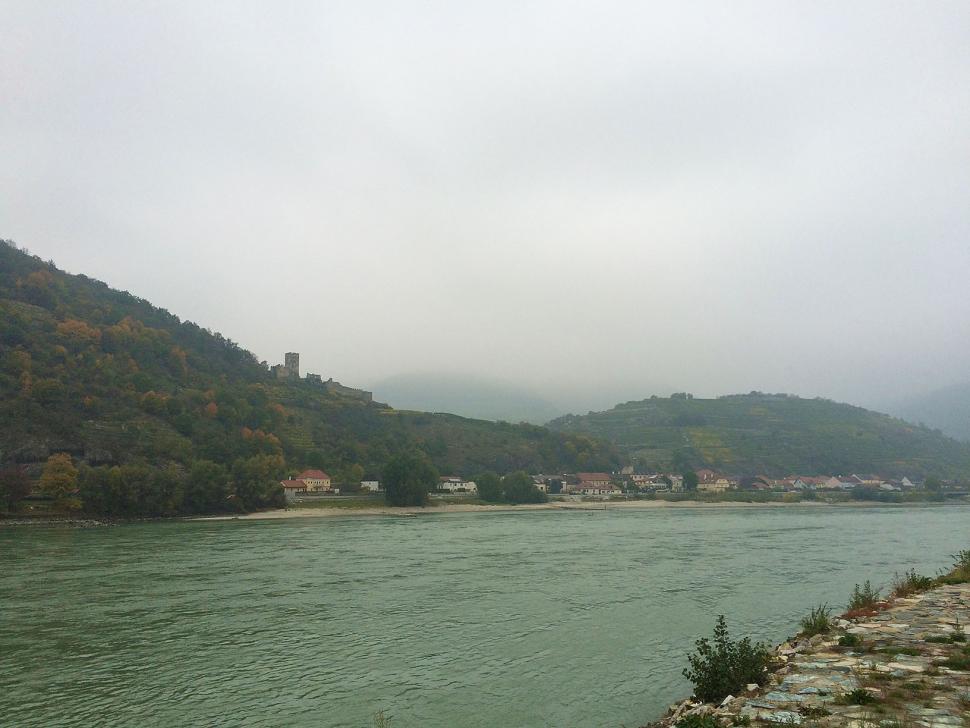 The next morning, however, the weather had different plans again. Torrential rain greeted us and rather than pottering about a town in those sort of conditions, we headed straight for the river. We cycled out of the town, then through meadow and woodland, passing a small herd of deer and numerous herons, before rejoining the Danube itself. The river here was split in two, with the heavily wooded left side curiously lower than the right, the cycle path a straight line elevated between the two. This difference in water levels remained a mystery until we reached the power station at Altenwörth where we crossed over again. The left hand fork of the river was the true level, with the right artificially elevated to create the dam and power.

Soon we passed the power station at Zwentendorf, Austria’s one and only nuclear power station, which despite having been built and finished in the 1970’s to the tune of around a million Euros, was never actually operational, due to Austria’s decision to ban nuclear power. For a dose of irony the bizarrely quiet grounds now house a solar farm.

Despite the obvious evidence of the industrialisation of the Danube, a working river of great importance, the cycle route rarely felt overshadowed. There remained always a strong sense of the wildness of the landscape and it was a pleasure to pass through it on two wheels. As we cycled along the final stretch of our route, towards Tulln, the landscape was finally starting to show signs of being closer to Vienna. Instead of wild wooded hillsides and quaint historic villages were smart, expensive looking homes and marinas. We could have cycled all the way into Vienna if we'd wanted, but we decided to take the advice of the guides and drop our bikes here and take the train the rest of the way. 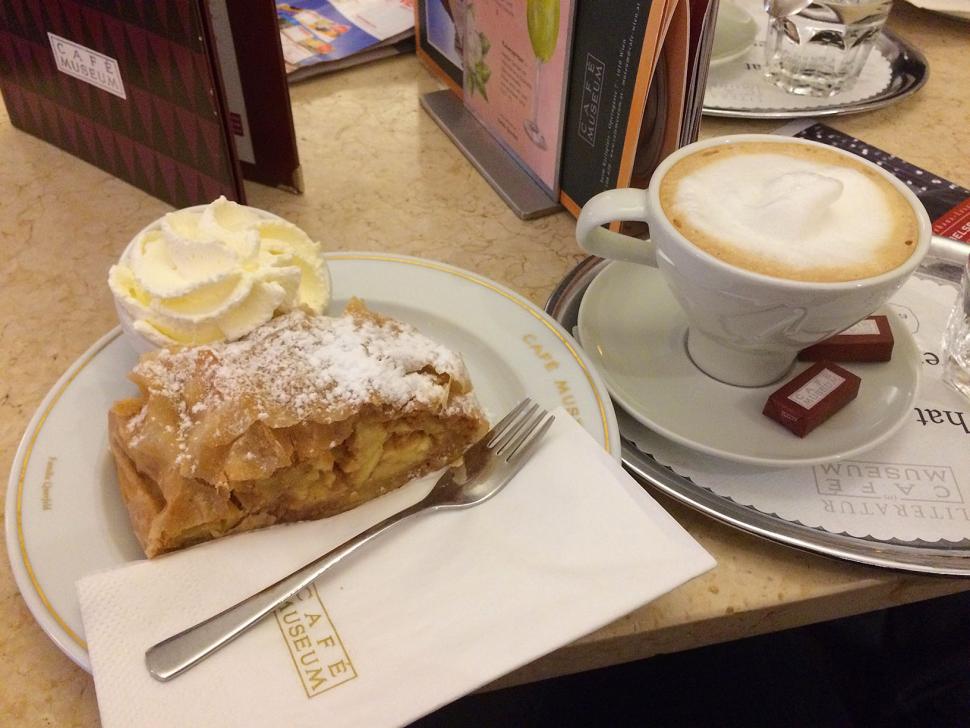 Vienna itself was actually a very cycle friendly city, but I’m not sure how enjoyable it would have been to try and cycle all the way in and find the hotel! City bikes were everywhere, and seemingly every street had at least one bike shop, while the bike lanes that criss-crossed the entire city were more often than not so prevalent as to be confusing for the pedestrians trying to avoid them. We would have rounded off a great cycling trip with some city bike action if it hadn’t been for the torrential rain that meant the excellent public transport network was much more appealing. Instead we immersed ourselves in art, coffee and cake. Well, we almost earned it.

The very essence of the Danube Cycle Way is to hang up your hurrying, and take a chilled relaxing ride through some nice scenery. On a self-guided but supported ride, like the one we took, the planned distances each day are hardly what you would call challenging for the averagely experienced cyclist, but they are absolutely spot on for maximum enjoyment of the ride with enough time to relax in the towns at each end as well. I for one have frequently fallen foul of planning a touring route that gives a great flat out ride each day but allows no time at all for kicking back at the end. This is not that sort of ride. That said, if a fit road cyclist were so inclined, it would actually make a great (and short) road cycling break since the distances between stops can be tuned to your needs and the path is good quality throughout and almost entirely traffic free. The flat and traffic free nature of the route, and the relatively short distances means it is ideal to consider for a family holiday too.

We travelled with Inghams, on their 8 day Treasures of the Danube trip from Passau to Vienna. The trip costs from £764 per person departing 15th May 2016. Price includes flights from London Gatwick to Munich, returning Vienna to London Gatwick, train to Passau, three- and four-star bed and breakfast accommodation, bike hire for seven days, thee Danube boat trips with bike transport included, train from Linz to Dornach with bike transport, return trip on the Pöstling mountain railway in Linz, entrance to Castle Artstetten, detailed route descriptions in English, detailed map and guidebook, telephone assistance throughout the tour, luggage service from Passau to Vienna, train transfer to Vienna airport. 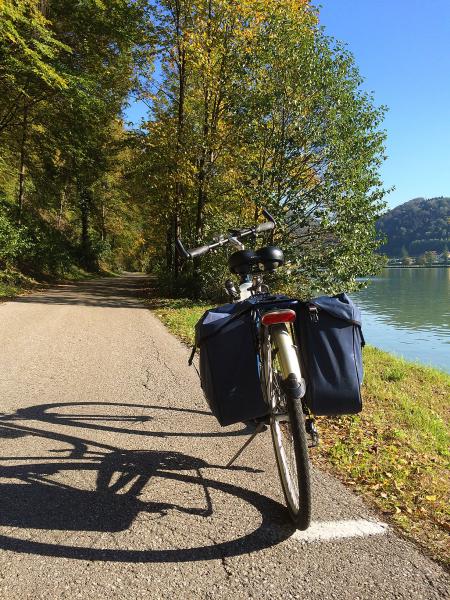 The trip included bike hire but taking your own bike (which I would probably advise for optimal comfort) gets you £50 off the holiday price, which is probably balanced out by the cost of booking your bike onto a flight. Train reservations for the bike are required from Munich to Passau, but you can take a bike on the underground in Vienna to catch the airport train from Wien Mitte station. A lightweight hybrid or touring bike would be perfect, with a small bag or rucksack for daily essentials. As mentioned, a road bike would be fine, ideally with slightly broader tyres.

The luggage transfer is brilliant. You leave your bag at a designated place in each hotel by 9am and it miraculously appears at your next hotel by the time you get there. This luggage transfer can be used whether you use hire bikes or take your own.

For more information on Austria, Vienna and the Danube Region see

Along with the excellent guide that Inghams send with every booking, there’s also a guidebook to the Danube Cycle Way by Cicerone (£14.95, www.cicerone.co.uk) which covers the route from Source to Budapest, with the second part due out in early 2016.