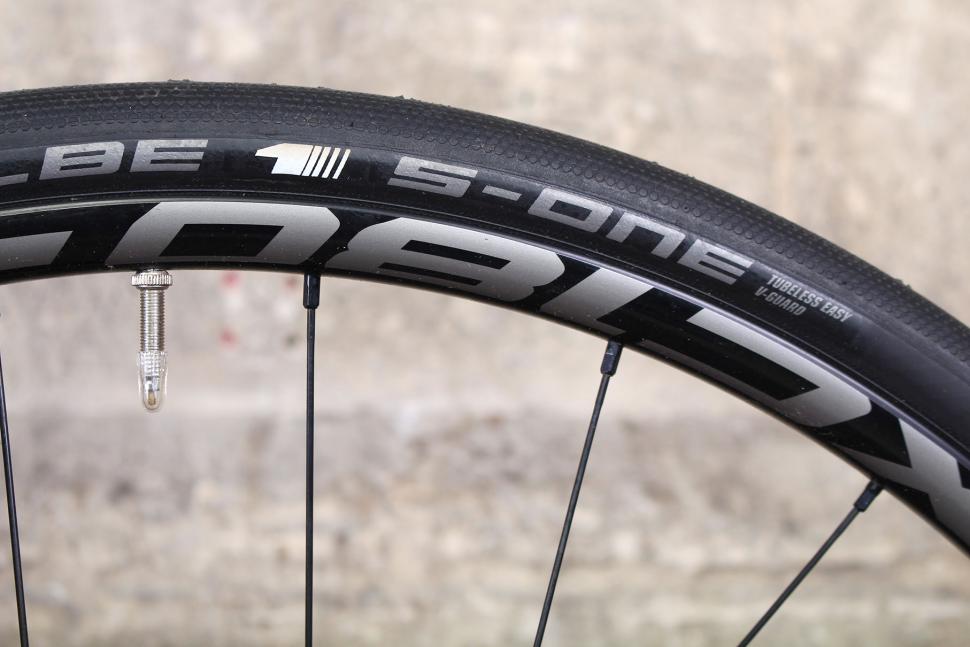 What width tyres are best for you? You've never had a bigger choice of high-performance road bike tyres, but how do you decide how wide to go?

Road tyre widths: everything you need to know
by David Arthur @davearthur

How wide are your tyres? It’s likely you’re riding whatever width tyres your bike was sold with, and the type of bike you’re riding largely defines tyre width. Bicycle tyres come in a huge array of widths, from skinny 19mm tyres designed for the velodrome to four-inch mountain bike tyres for battling through deep snow.

There’s a trend in the road bike market at the moment for wider tyres. Even racing bikes are shifting away from the previous standard 23mm width to fatter rubber, typically 25mm or 26mm wide. Non-racing cyclists are increasingly adopting even wider tyres in the pursuit of comfort on lousy road surfaces and the versatility to easily handle dirt roads and tracks. If you’re wondering what the benefits of wider tyres are, have a read of this feature to discover the pros and cons of wider tyres.

The width of the tyres on your bike depends on a large number of factors, like the riding you do and whether you have mudguards, but the biggest is simply what you can physically fit in the frame and fork. This usually reflects the purpose of the bicycle, with racing bikes generally designed around narrower tyres, and touring and gravel bikes designed to accept wider tyres. However, with wider tyres getting increasingly popular, even race bikes are compatible with much fatter tyres than 10 years ago.

>>Read more: Your guide to road cycling tyres + 14 of the best option

Let's take a look at the tyre widths that work well for different bike types and uses. 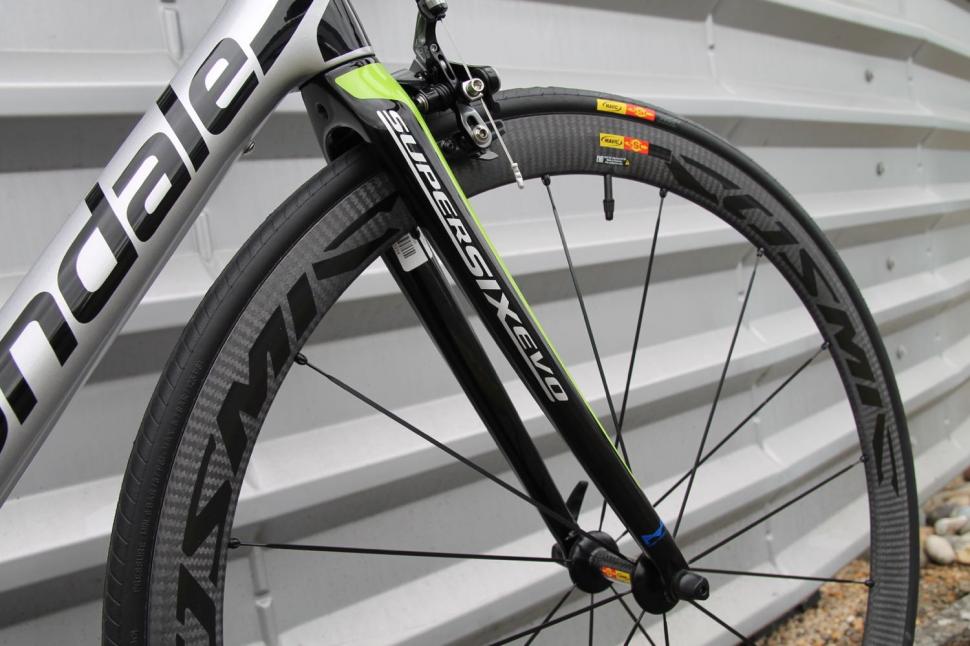 Race bikes have the narrowest tyres. They are narrow to reduce weight and improve aerodynamics. The common standard for many years has been 23mm (it used to be even narrower) but that has started to change as the pro peloton is now adopting wider tyres, with 25mm slowly becoming the default choice. Some of the latest race bikes have been designed to accommodate even wider tyres, up to 28mm in some cases.

Sportive and endurance bikes, built for comfort but loosely based on race bikes, typically accept wider tyres, with 28mm a common standard. Outright speed and low weight are less of a priority on an endurance bike, and a considerable improvement in comfort can be achieved with even only marginally bigger tyres. Not all bikes are built the same, though, and some accept wider tyres and some manage to accommodate wide tyres with full-length mudguards fitted. As endurance bikes mature so the market is pushing for even wider tyre compatibility.

Their ability to take very fat tyres is partly why these bikes have gotten popular. Some accommodate up to 45 or 50mm tyres, though there is nothing to stop you fitting narrower tyres if it's mainly for road use. These bikes are designed for tackling a wide range of road surfaces and off-road tracks and a bigger tyre helps deal with bumpy terrain, provides grip and keeps punctures at bay. As it's a relatively new category and there are no standards when it comes to the perfect tyre width, no two gravel/adventure bikes are the same. Tyre width and choice comes down to the intended use and the ratio of rough to smooth stuff. 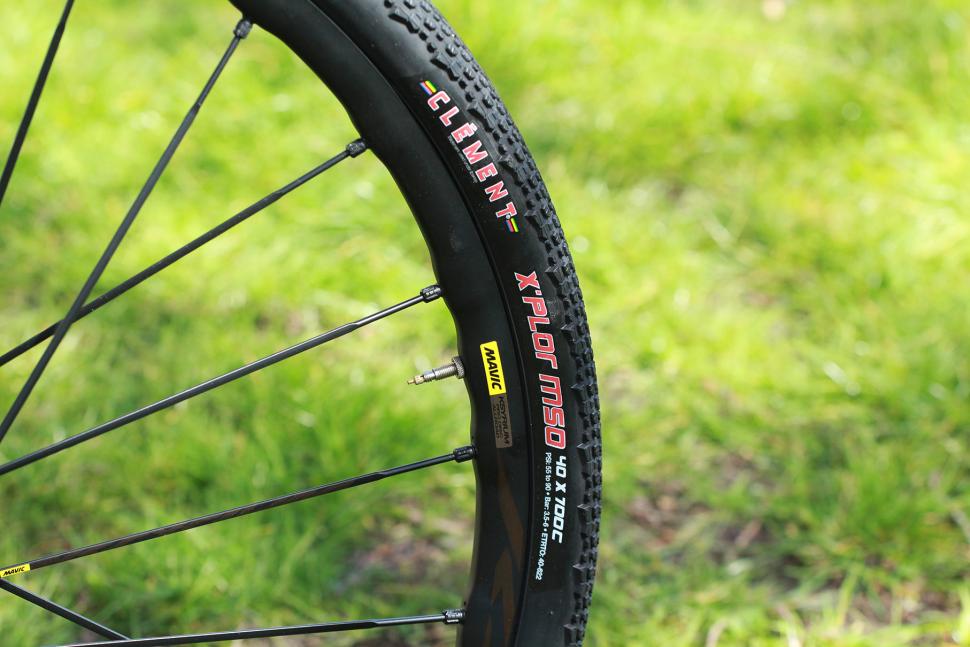 Some gravel/adventure bikes are based on cyclocross bikes, which are designed around 33mm tyres, the maximum allowed for racing by cycling's governing body the UCI. Other manufacturers have taken more inspiration from mountain bikes, with bikes that can accommodate 2.1in tyres intended for 29er mountain bikes. Almost all gravel/adventure bikes are designed with disc brakes; the removal of the caliper rim brake really increases the width of the tyre that can be fitted.

Touring bikes come in many shapes and sizes depending on the intended usage, from light and fast tourers based loosely on regular road bikes to round-the-world heavy-duty models. Tyre size typically varies from 25mm to 42mm, and some heavier duty touring bikes use 26-inch mountain bike wheels with even bigger volume tyres. Many touring bikes are very traditional in design and use rim brakes, which limits the maximum tyre width, though some touring bikes use mountain bike style V-brakes to provide more tyre clearance. Disc brakes are becoming common on touring bikes, like this Ridgeback Panorama below. 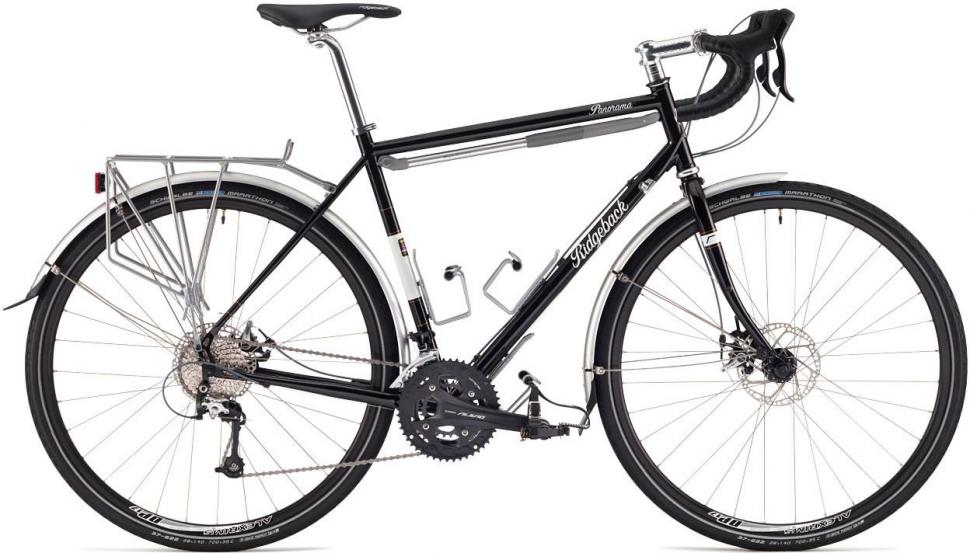 With touring bikes, the tyre you choose depends on the sort of riding you want to do. Add in lots of off-road and gravel and you probably want a tyre with some tread to provide grip on the loose surface and comfort over the rough terrain. If it’s for blasting around the lanes on a Sunday morning or with a light luggage, a narrower and lighter tyre will be a better fit.

Commuting, city and hybrid bikes have tyre size influenced by the type of bike they’re loosely modelled on. Road bike-style commuting bikes might accept a tyre of around 28mm width, often with space for mudguards, but some commuting bikes, and those based on mountain bikes, will take up to a 44mm tyre.

If the tyre fits

To help you choose the right tyre for your bike, tyres are made to a common standard, so you can easily find a tyre to fit your wheels. ISO 5775 is an international standard for labelling the size of bicycle tyres and rims, originally developed by the European Tyre and Rim Technical Organisation (ETRTO). 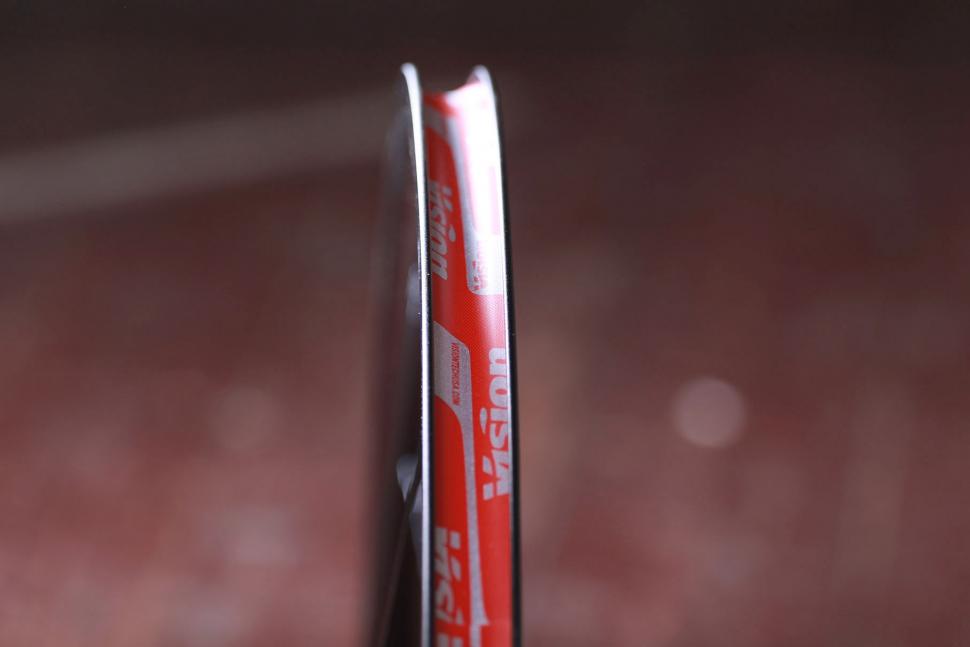 The ETRTO tyre label comprises two numbers separated by a dash. This number is usually on the sidewall of the tyre, something like 28-622. The first number is the inflated width of the tyre, the second figure is the diameter of the bead seat of the matching rim, in millimetres.

If your tyre and rim have the same bead seat diameter, they'll fit together. If not, they won't. People who deal with older and more obscure bike types have to worry about this stuff, as there are some combinations that look like they will fit, but don't. However there are only a handful of tyre sizes in common use for adult bikes in the UK. 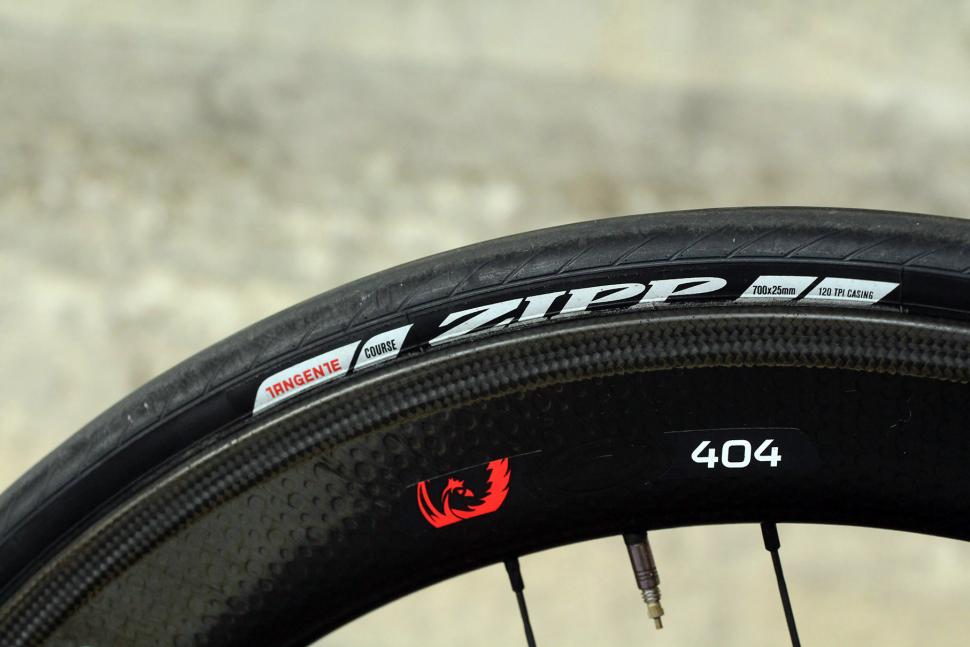 Far and away the most common size for road bike wheels is usually referred to as 700C and has a bead seat diameter of 622mm. The '700C' bit comes from a traditional French wheel standard based on the outer diameter of the inflated tyre, 700mm. Originally, 700C tyres were quite fat, to get the tyre to 700mm across, so ETRTO 622 and 700C describe the same wheel size but 622mm is the actual measurement of the rim while 700C describes the outer diameter of the tyre. There's a big range of tyre widths now available for 622mm rims: a 33mm cyclocross tyre will have a bigger diameter than a skinny 19mm time trial tyre, for example.

Tyre widths available for the 700C/622mm size standard vary from 18 to 47mm, with popular widths such as 23, 25 and 28mm in the mix. The big-wheeled mountain bikes known as 29ers also use this size, so there are off-road tyres up to a whopping 75mm wide.

While you could fit any width tyre to any width rim, it’s best to find a suitable width rim to match the tyre width. The CTC recommends the ideal relationship between a rim and tyre as being about 1.8 times. Rims measuring 15 to 17mm across are the most common used for road bikes and accommodate tyres ranging in width from 23 to 50mm.

Schwalbe has produced this handy table which lists recommended tyre and rim width combinations. You can see that you can comfortably fit a 28mm tyre to a 15mm wide rim, but it’s not recommended to fit the same tyre to a 13mm width rim. You can find out the rim width if it’s not printed on the rim, but using a tape measure to measure the distance between the inner rim walls. 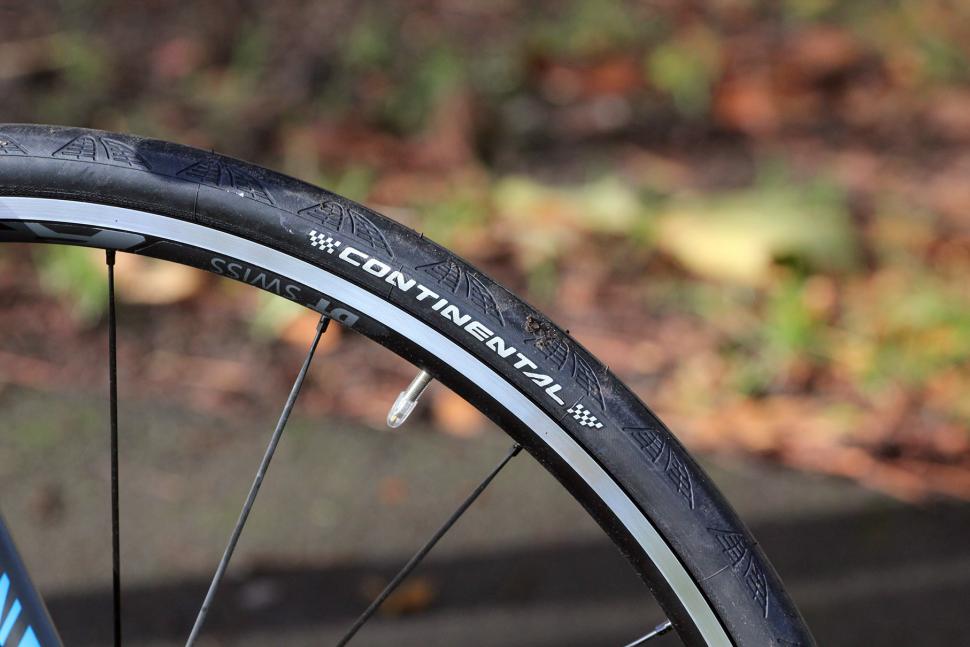 While you might be able to fit wider tyres to your rims, you might not necessarily have clearance in the frame and fork to accommodate the wider tyres. A bike manufacturer usually specifies a maximum width tyre for each model in its range, with a safe range of clearance between the tyre and frame, and you can normally find this information on its website.

The width of the rim can impact the width of the tyre. A 25mm tyre fitted to a wide rim can actually measure 27mm across, and it's a trick that some manufacturer have recently employed with their latest endurance bikes.

What width tyres should I choose?

That depends on the width of your current tyres and if your frame and rim will accept wider tyres. Fitting wider tyres is a common upgrade and even going from 23mm to 25mm, or 28mm to 32mm, can provide a noticeable change in the ride quality of the bike. Now hopefully you'll have the information to choose the right width tyres for your wheels and bike.