Subscribe
Back to Features
feature
How to
Race
Tech This is your complete guide to all the bikes used by the 18 WorldTour teams from Team Sky to Bora–Hansgrohe.

Compared to last year, there isn't a whole lot of change on the bike and kit front. Fresh new paint jobs for Bora, Movistar and Team Sky bikes maybe, and a couple of new sponsors resulting in new team names and jersey redesigns, but no major shakeups.

There are some new bikes being raced this year though, mostly updates of existing models. There’s the new Specialized Tarmac SL6, Trek Emonda SLR, Merida Reacto, Giant Propel Disc and Cervelo R5 to name a few. There are going to be more releases this year, that you can be sure of, including Cannondale's new aero road bike that has been spotted in the wild, plus we expect to see some updates from Specialized and Trek at some point - both brands have aero bikes that are due for a refresh. There'll surely be other new bikes being updated and launched ahead of the Tour de France, the annual launch period for the bike brands involved in professional racing.

With more bike brands developing disc-equipped race bikes, it'll be interesting to see how many teams embrace discs this season. There's evidence of a some uptake in the peloton but it's far from widespread adoption. Shimano has committed to disc brakes in a bigger way this year, with its first Dura-Ace disc brake groupset being launched about a year ago, and Campagnolo and SRAM now have disc brake groupsets.

- Cycling's top tech trends for 2018 and beyond

Shimano continues to dominate the professional peloton with its Dura-Ace Di2 groupset, with Campagnolo and SRAM a small presence. There's no sign of FSA's WE K-Force or Rotor's UNO hydraulic groupsets yet. Will we see them this year? The one British bike brand, now owned by Baden Cooke and Rob Gitelis, supplies AG2R with a number of bikes, including the O2 lightweight race bike and the One, an aero bike that is pictured above. This model retains the distinctive split downtube that was a key feature of the original Vis Vires launched not long after the company was started.  A disc brake version of the One was introduced earlier this year, might we see it in race action this season? Astana continues to be sponsored by Canadian bike brand Argon 18, and the Gallium Pro pictured here is its flagship race bike. This isn't your ordinary team paint job either, it's a custom painted special for Miguel “Superman” Ángel López. The team is the only outfit to use the lesser spotted Corima carbon wheelset, combined with Shimano Dura-Ace Di2 groupsets and FSA K-Force chainsets and matching finishing kit. 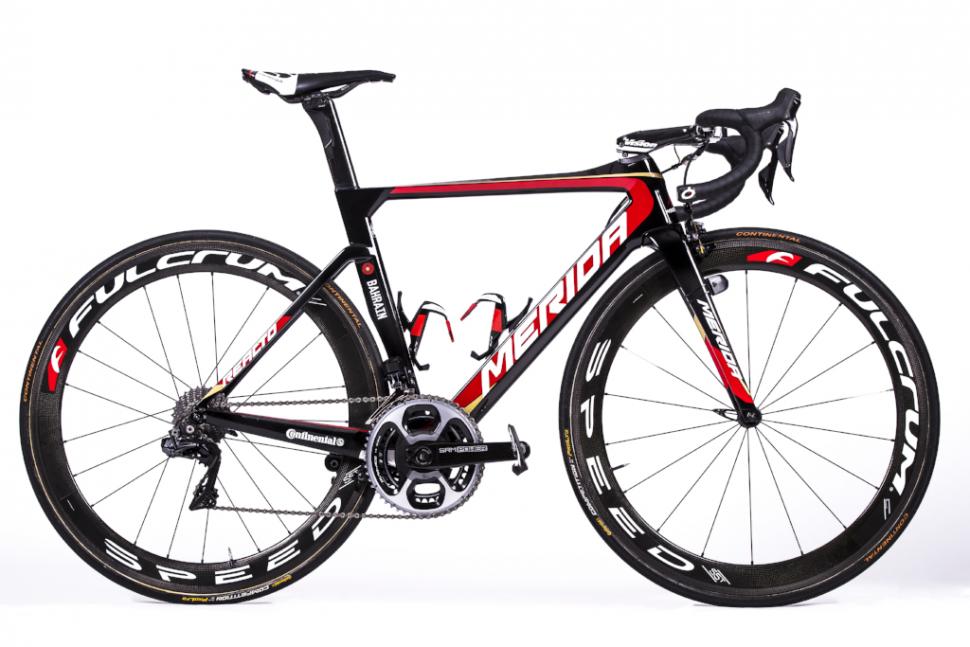 The Bahrain-Merida team will have the choice of two race bikes, as do most teams, with the aerodynamic Reacto (pictured above) and lightweight Scultura. Like most other teams, there's a Shimano Dura-Ace Di2 groupset but the team is sponsored by SRM and uses its new carbon fibre crankset with integrated power meter. Wheels are Fulcrum, an offshoot of Campagnolo, with a choice of 40 and 55mm depth rims.

You can even buy the brand new Reacto aero race bike with this team livery if you have deep pockets. You can read Mat's review of the bike here. BMC launched an updated TeamMachine SLR01 for 2018. It's lighter, and a disc brake version now joins the existing rim brake bike. The regular team bikes are painted red, but this specially painted bike belongs to Olympic champion Greg van Avermaet and stands out from the crowd. The team gets the full Shimano treatment from Dura-Ace Di2 gears and brakes to wheels.

The biggest change for the Bora-Hansgrohe team is a new colour but otherwise, it's the same Specialized Tarmac SL6 and Venge race bikes as last year. The team have switched to Sportful clothing this year as well and they'll be using Wahoo Bolt computers and Specialized's brand new power meter, which is offered with both a Dura-Ace or S-Works Carbon crankset option. 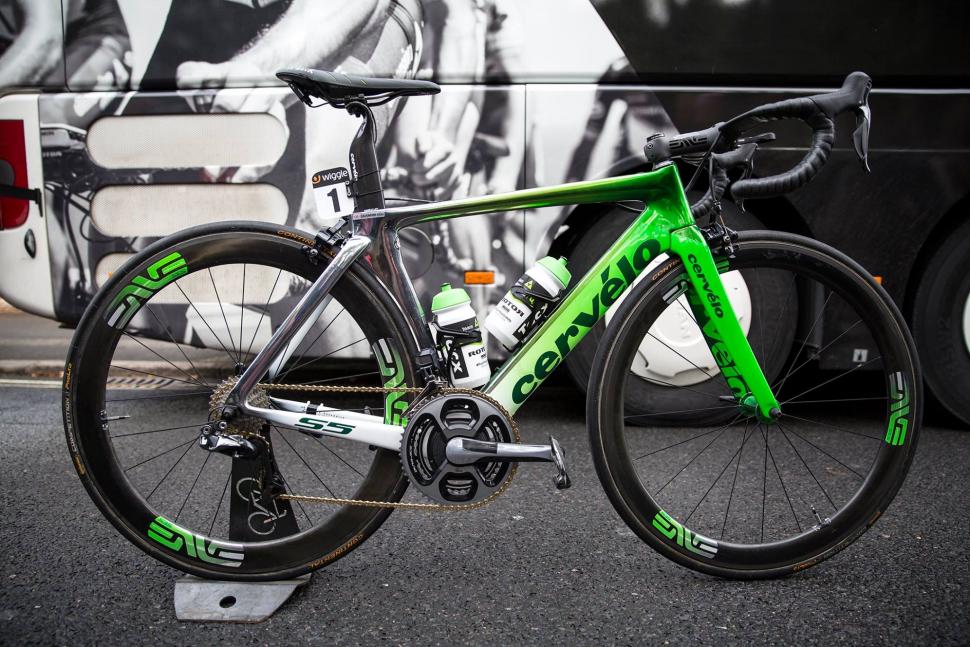 Dimension-Data is sticking with Cervelo again this year and it is riding the brand new R5, the latest in a line of R-series road bikes. This one has numerous aero and weight changes and is offered with disc brakes for the first time. The team still uses the S5, an aero bike that is surely prime for an update this year? This flash bike belongs to Mark Cavendish. The Cannondale team now has the longest name of any team ever, but despite the new sponsors and the dazzlingly bold kit design, they're still racing the same green and black Cannondale SuperSix Evo bikes as last season, Vision wheels replacing Mavic and FSA cranks and Dura-Ace Di2 gears. The team has been spotted racing a new aero bike with disc brakes so we expect that to be launched before, or during, the Tour de France. 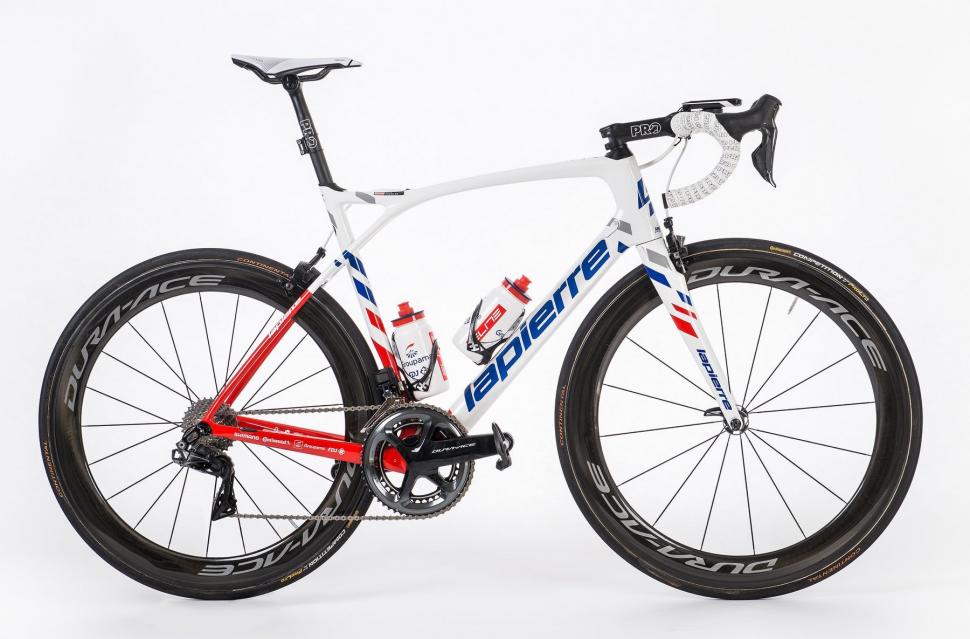 The French Groupama–FDJ team continues to race Lapierre bikes this season, with the Xelius SL above the bike that most of the team will use, including GC hopeful Thibaut Pinot. They'll also have the Aircode SL aero race bike for fast and flat stages. The Xelius SL is a bike that is constantly evolving, and changes this year revolve around a new integrated seat clamp and recessed head tube that presumably improves aerodynamics and provides a lower handlebar position. 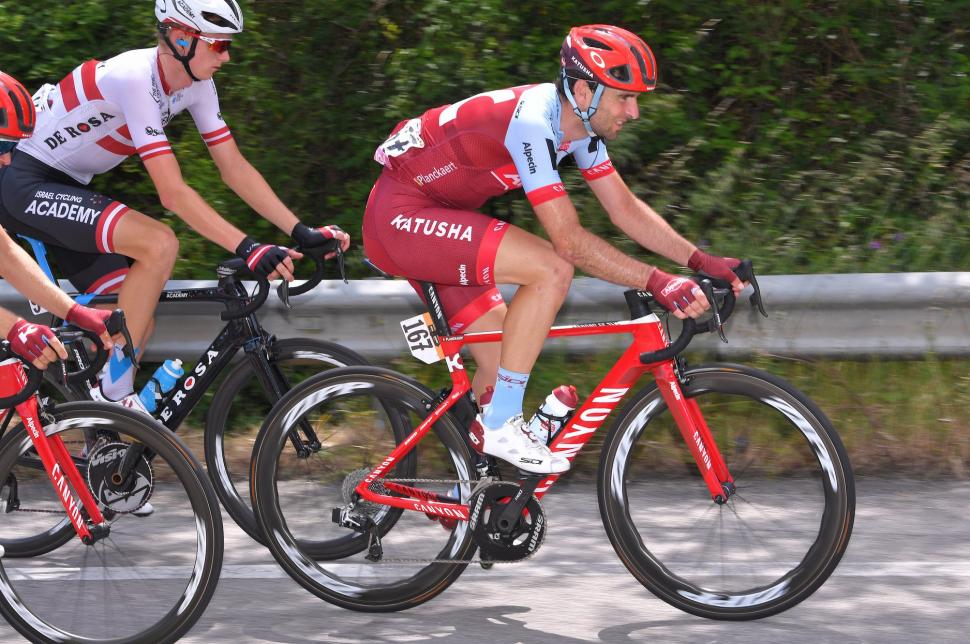 Katusha sticks with same white over gloss red Canyon bikes, with the Aeroad CF SLX  (above) and Ultimate CF SLX at their disposal. On the rider front, it's out with Alexander Kristoff and in with Marcel Kittel, so expect a bright red Canyon to be flung over a few finish lines in first place this year. Katusha is the only team to use SRAM's eTap wireless groupset with Zipp wheels and Quarq power meter cranks. 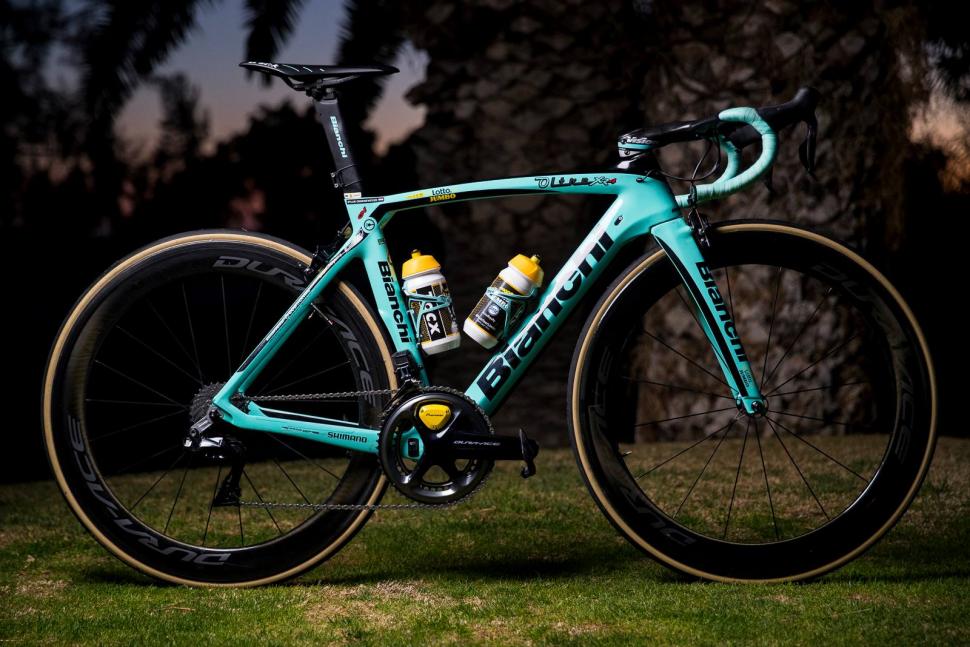 LottoNL-Jumbo is riding the same Bianchi Oltre XR4 it used last year, once again equipped with a full complement of Shimano parts, including Dura-Ace Di2 groupset and matching wheels. It's the only team to use a Pioneer crank-based power meter, neatly integrated into the Dura-Ace crank. There are no major changes for Lotto-Soudal this season. They're racing the same Ridley bikes, a choice of the aero Noah and lightweight Helium, with  Campagnolo Super Record EPS groupsets and Bora Ultra wheels. The Australian team is riding the same black and yellow Scott bikes it was racing last season, with a choice of Foil and Addict depending on the preferences of the rider and the details of the stage route. Gearing is Shimano Dura-Ace Di2 and wheels are also from Shimano. Mitchelton-Scott is one of five professional teams sponsored by 4iiii, and it uses its new rank-based power meter. 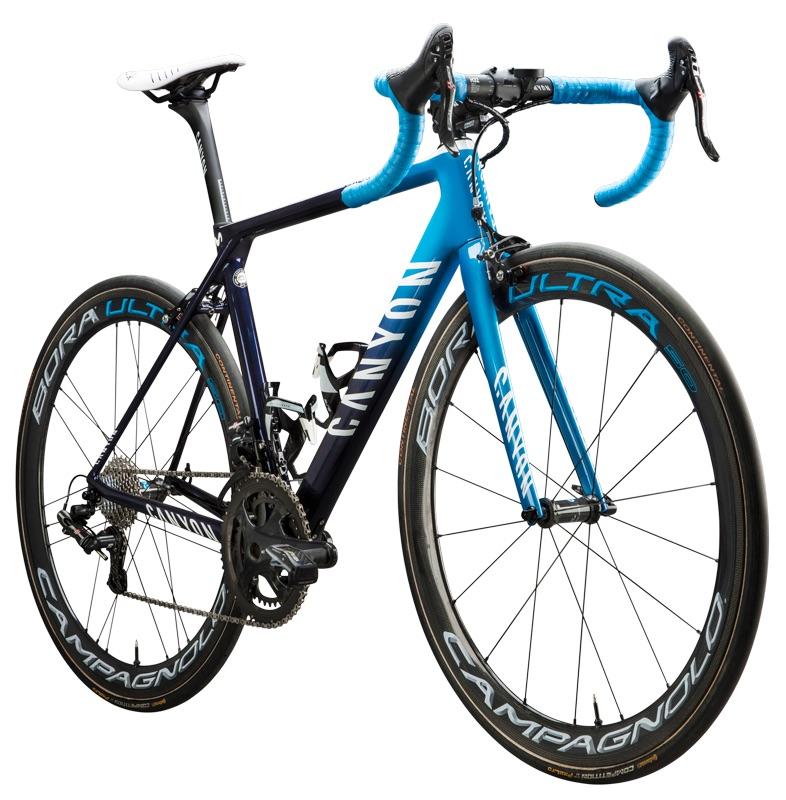 The biggest changeo the peloton this year is the new look Movistar Canyon race bikes. They've opted for a light to dark blue fade that looks okay in the photos but hopefully will look better in the flesh. I'm not sure the white saddle works with the frame though. What do you think? 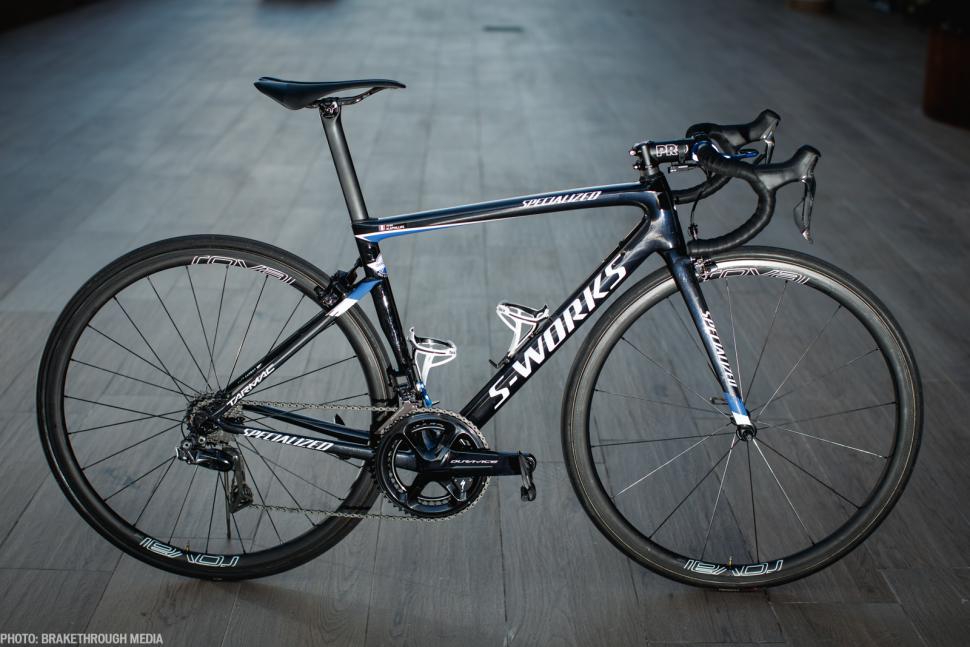 Last year the team were on mostly black bikes, but it now looks like Quickstep has injected a bit of colour into its bikes, with flashes of white and blue at the fork dropouts and along the top tube and seatstays. That's the new Tarmac SL6in the pi with the latest Dura-Ace Di2 groupset and Roval wheels. 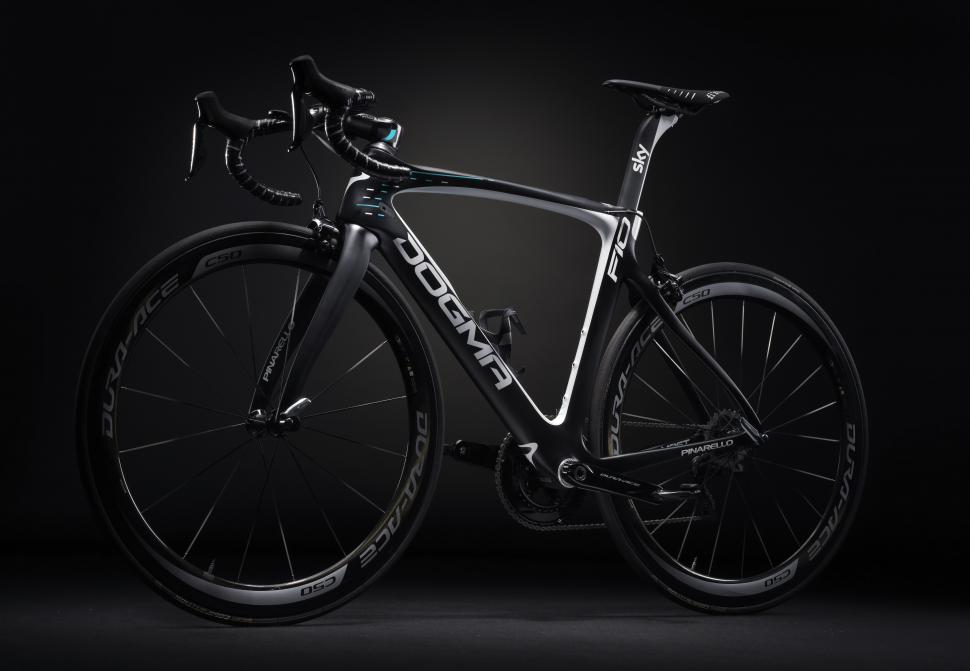 A modest update to the Team Sky Pinarellow, still largely black but now with a side order or white to match their new white jerseys. Underneath the paint is the same Dogma F10 that Froome rode to Tour de France victory on last year. You can read more about the 2018 race bike here. 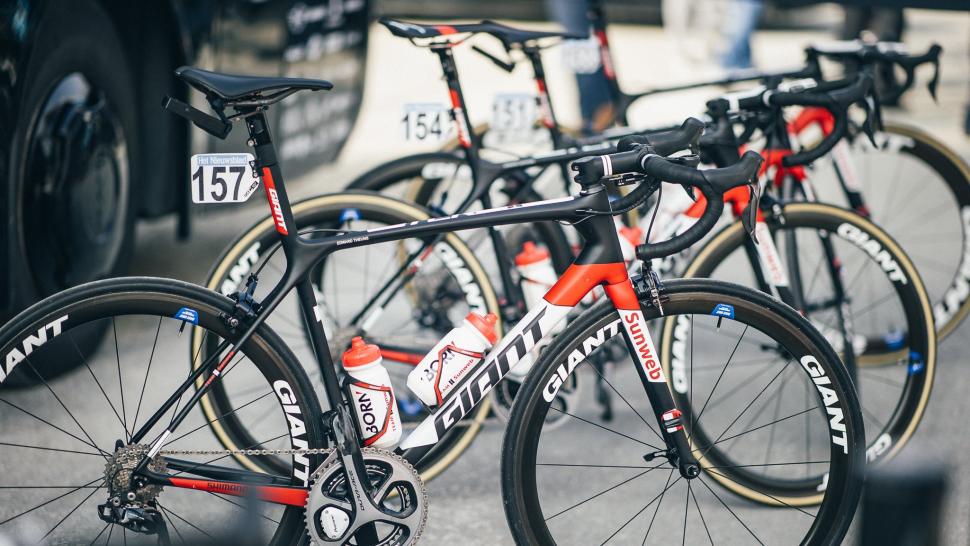 Team Sunweb is backed by Giant again and has the choice of the aero Propel or the lightweight TCR, and both bikes are now available with disc brakes, though whether we actually see those bikes being used by the team is another matter. The team uses Shimano Dura-Ace Di2 groupsets but opts for a Pioneer power meter and this year has switched to Giant's own carbon wheels, as the bike company is keen to promote its own range of wheels. 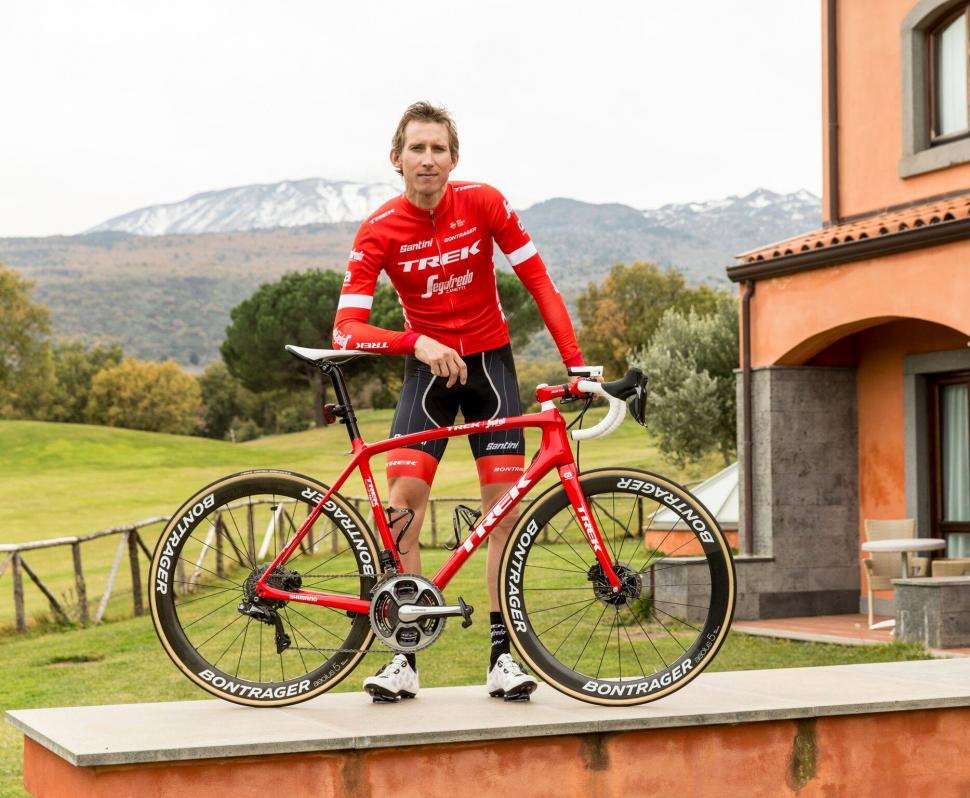 Red is still very much the colour of choice for Trek-Segafredo, and this year has the existing Madone aero race bike and the brand new Trek Emonda SLR to choose from. The Madone is probably due an update we reckon, and a disc brake version has been spotted on the internet. The Emonda SLR is brand new however, the US company claims it's the lightest production bike in the world. It has also developed a disc brake version which is one of the lightest disc-equipped race bikes we've yet seen. We've already seen this bike being used in races this season.

Here Bauke Mollema poses with his disc-equipped Trek Emonda SLR, a bike he has posted on social media that he is choosing to ride. Bikes are kitted out with Shimano Dura-Ace Di2 groupsets, SRM power meters and Bontrager carbon wheels with Vittoria tyres. It's great to see iconic bike brand Colnago back in the peloton, once again sponsoring the UAE Emirates team. The company has been busy in recent years, developing first the new Concept aero bike, the updated V2-r and most recently the brand new C64, pictured above. It's one of the few teams to use Campagnolo, with top-end Super Record EPS groupsets combined with Bora Ultra wheels. You can read all about the new C64 here.

Which bike would you pick from this impressive selection?