Pinarello unveiled the new Dogma F12 – and the Dogma F12 Disc – at the start of May, the headline news being that, compared to the previous F10, it reduces drag by 7.3% at 25mph, saving the equivalent of eight watts.

Pinarello says that the biggest improvement to the Dogma F12 is the complete cable routing integration. It developed a specific handlebar and headset design that enables the integration of all possible brake and gear combinations. Team Ineos uses rim brakes and Shimano Di2 electronic shifting, but disc brake hoses and cables for mechanical derailleurs can run internally too. The MOST Talon integrated handlebar has been refined and features a channel for the cables. The rear of the stem section is enlarged to allow the cables to go directly into the frame. 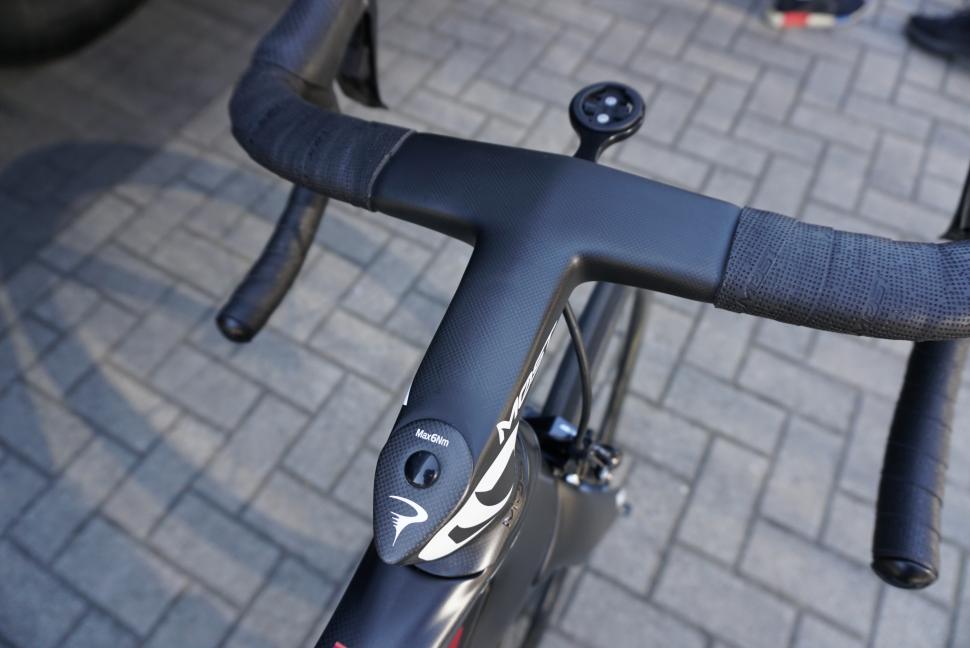 Geraint Thomas has a bar that's marked as 42cm – that's measured outer to outer – while the stem section is 130mm.

Adjustment of stack height is still possible. You get an adjustment range of 40mm thanks to special interconnecting headset spacers. A regular handlebar and stem can be used with the Dogma F12 if you like, you’re not tied into using this new setup.

Some frame shapes have been altered. The top tube now has a kink in it, for example, which is something we first saw that on Pinarello's Grevil gravel and adventure bike. 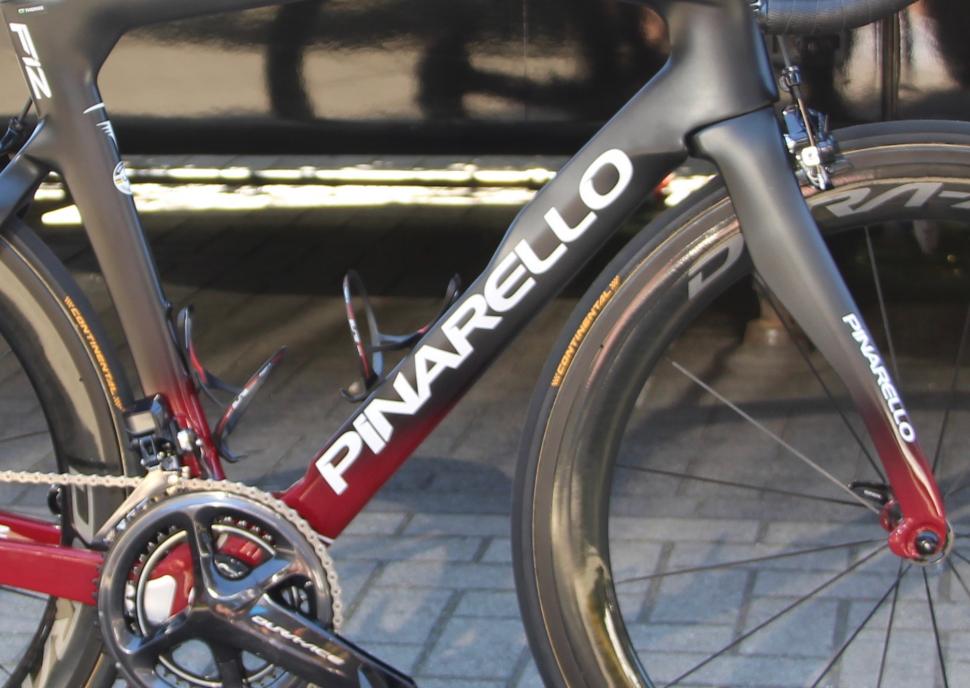 The Flat Back down tube profile – where the leading section of the tube is shaped for aerodynamics with the back chopped off square – is retained from the previous Dogma F10, but has been made narrower.

The down tube is sculpted to accommodate a water bottle, on the basis that we all carry one most of the time. The profile of the down tube alters at the point where the bottle cage sits. The idea is that the tube and the bottle work together aerodynamically. With the F12, Pinarello has reshaped the bottom bracket to allow the cage to be mounted 5mm lower than before in order to reduce drag further. 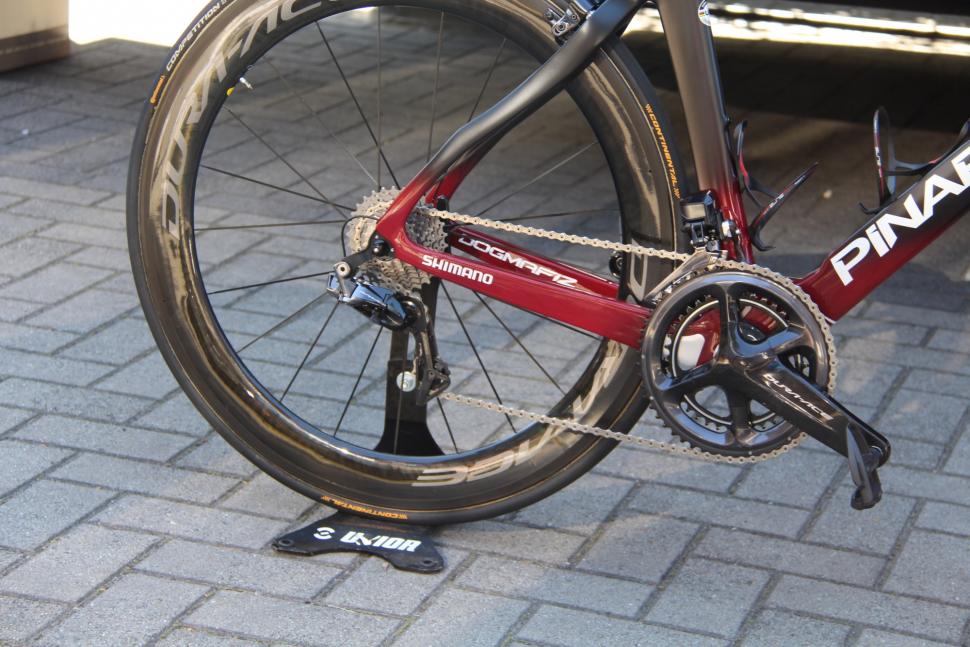 The chainstay cross sections have been completely redesigned to increase stiffness without adding weight. Pinarello says that this improves power transmission and responsiveness.

The fork has been updated with a large profile top section to the legs that's said to improve airflow, and Pinarello says that it is both stiffer and lighter than previously. The rim brake version of the Dogma F12 moves to direct mount brakes.

The F12 will take a tyres up to 28mm wide whereas the maximum you could run with an F10 was 25mm, which is what Team Ineos riders use most of the time. Their bikes are fitted with Continental Competition ProLTD tubulars. 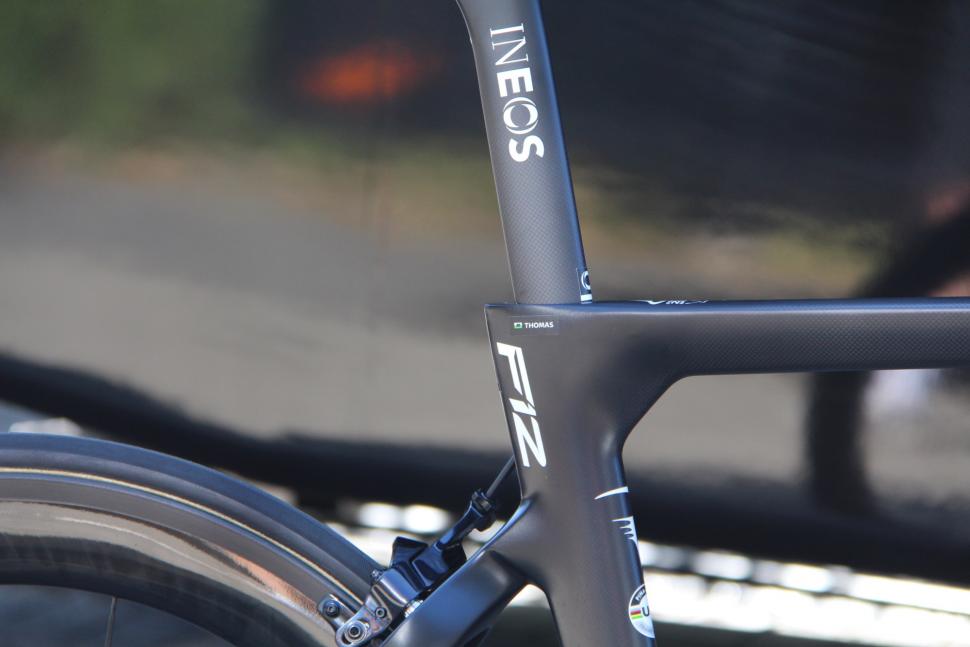 Pinarello claims the weight of a raw, unpainted frame is 820g.

Team Ineos uses Shimano Dura-Ace Di2 groupsets with the junction box positioned in the down tube where it's easy to access. They use Shimano's chainset based power meter. This bike's chainset has a 53-tooth outer ring and a prototype 38 tooth inner ring rather than the more common 39. The cranks are 175mm while the cassette is an 11-30.

Shimano also supplies Dura-Ace carbon fibre tubular wheels. These are the C60s which have a 60mm deep section rims.

Team Ineos also has a supply of wheels from Germany's Lightweight for this year's Tour de France. As the name suggests, these are superlight and we've already seen them being used by Geraint Thomas. Team Ineos uses saddles from Fizik, G opting for an Arione with carbon-fibre rails. These markings on the cover, by the way, are reference points to allow the mechanics to get the positioning right. G's bike features a Welsh dragon at the head tube/ top tube junction and a Welsh flag along with the team logo on the upper surface of the top tube.

Pinarello has announced an X-Light version of the Dogma F12 which comes out of the same mould but with a 100g reduction in frame weight compared with the standard version thanks to a different carbon layup. The X-Light version has a rider weight limit of 85kg, which G is comfortably beneath, so we might well see him riding on one before the end of the race.