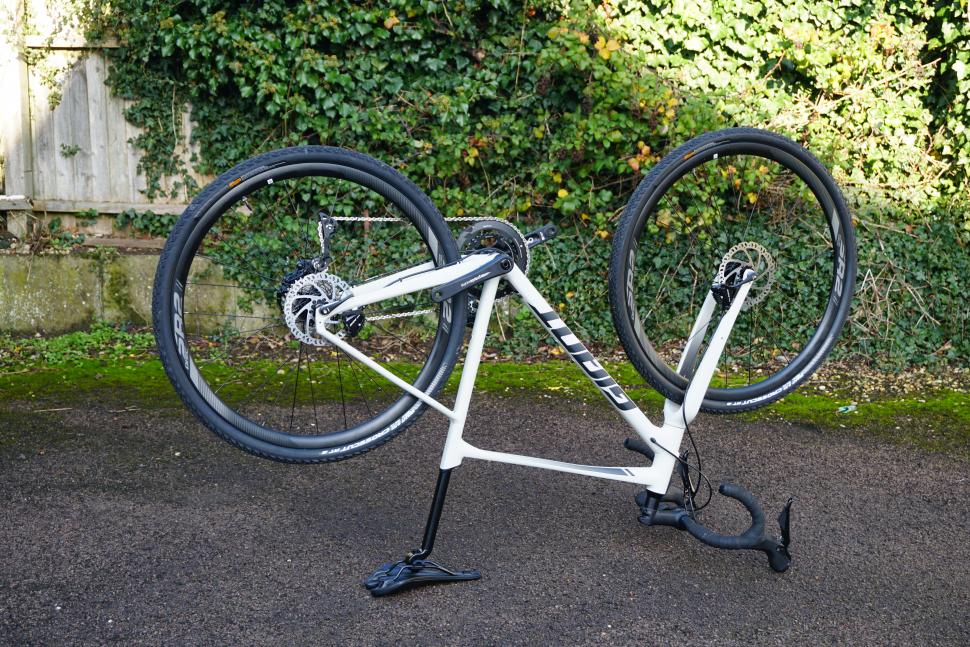 Do you ever put your bike upside down? 67% of you say it’s fine, and even the pros do it, so what's the problem?

Hands up if you’ve ever turned your bike upside down?
by David Arthur @davearthur

Do you ever put your bike upside down? It’s a question that is sure to cause heated debate amongst cycling friends anytime a mechanical occurs and somebody flips their bike over to get a better look. Here in the office, we couldn’t agree if it’s just fine or social death.

So we did a poll on Twitter, and from 926 votes an impressive 67% of you said it’s just fine, you can’t see a problem with flipping the bike. Some of the accompanying comments were quite illuminating too.

Is putting your bicycle upside down to fix a mechanical okay ot a bad thing to do?

I did this once to pump up tyres in front of someone and they were horrified at me so much they put the bike back up & did it for me.

As long as you remember to remove your Garmin first, the sound of the screen breaking on top of a mechanical sucks!

It’s clear that turning a bike upside down is an act of bicycle etiquette that divides opinion. The phrase it’s “not very pro” is often bandied about, so suggest it’s the sort of thing a pro would never do.

But the pros do it sometimes, as this photo shared by Richie Porte on Instagram shows Michael Matthews turning his Cervelo race bike upside down.

However, it’s clear from the accompanying comments that it is frowned upon by fellow pros and ex-pros. Robbie McEwan said: “Can’t be a pro....a pro NEVER turns his bike upside down.”

It’s inevitably not long before the “rules” get quoted here. Thumb through the Velominati rules and number 49 is “keep the rubber side down. “It astounds me whenever I see a bicycle helplessly turned upon its handlebars and saddle while the pilot optimistically leverages every muscle in their face to inspect the vehicle for evidence of its mysterious ailment,” it says.

Why would you not turn your bike upside down?

The only time you want to turn the bike upside down is to see to a mechanical issue. The most common reason for turning a bike over is to fix a flat tyre. Let’s face it, getting a wheel out of the bike can tricky, especially as you have to hold the bicycle frame in the air to avoid scratching the dropouts on the ground. Flipping the bike makes it much easier, you can get to the wheels and the bike is upright, not lying in a grass ditch.

Fettling gears and brakes can also be a bit easier too, especially if you’re indexing the gears and need to spin the drivetrain.

Reasons to avoid an upside-down bike

There are some valid reasons why you might not want to turn your bike over, other than the look you might incur from other cyclists.

The biggest problem with spinning your bike upside down when you have a mechanical is that it risks damaging/scuffing the saddle and hoods of your pride and joy. You’re also going to get dirt, mud or water on your main contact points when you get back on the bike. 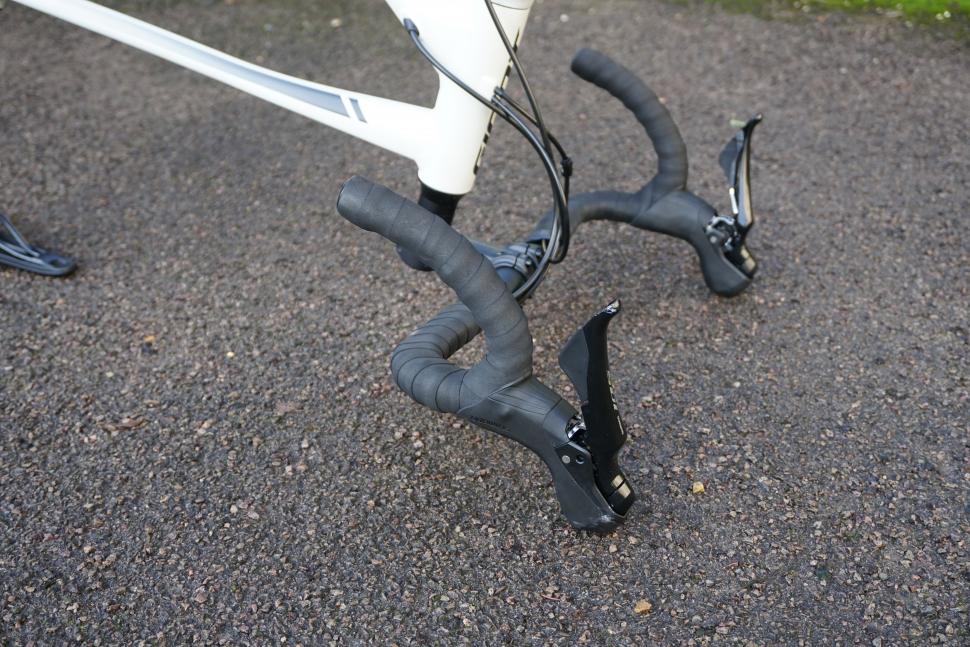 You’ll also have to pick up your water bottles as they’ll have dropped out of their cages and rolled down the hill. It the cages haven’t relinquished their grip on the bottles, they might not be leaking sticking energy drink all of your frame.

The other reason you don’t want to turn your bike upside down when you have a mechanical is that it rarely makes it easier to fix the problem that occurred in the first place. It can actually make it more difficult to diagnose or repair the problem.

More problems arise with the risk of getting covered in dirt from the tyres or grease from the chain when you turn the bike over.

What about hydraulic disc brakes? The disc brakes are a totally sealed unit with oil in the lever, caliper and hose, so in theory, the orientation of your bike shouldn’t make any difference to the brakes.

That said, we have seen people hang their bike up, or turn it upside down, only to then find the brake lever is all mushy. What is the likely cause is a small air bubble that was in the system has risen to the highest point, the caliper, and this has altered the feel at the brake lever. 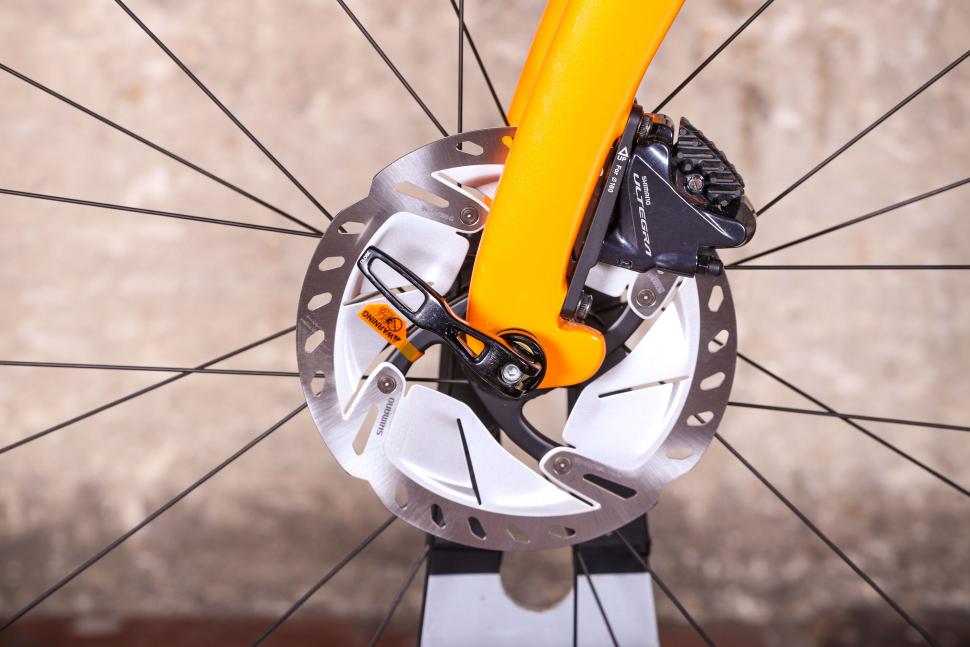 Shimano even recommends against turning the bicycle upside down. In a manual for its hydraulic disc brakes it says:

In reality, you’ll probably be okay with a temporary upside down bike, but you don’t want to be storing it upside down.

What are the alternatives?

You could hang the saddle from a tree, hook the handlebars over a fence or gate, or get a friend to hold your bike for you. You can even try the method of hooking the saddle over your head which is better demonstrated by the picture below. 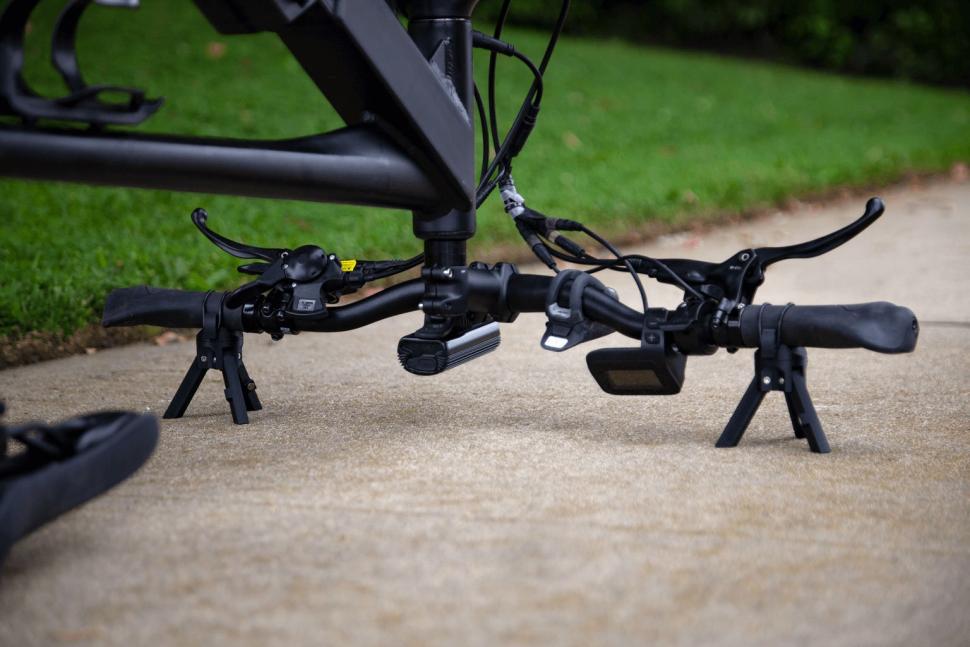 We’ve even had our attention drawn to a product designed specifically for this usage. The Handlebar Jack is a portable bike stand that clips to the handlebars and protects the grips and controls from the ground and makes it more stable. It’s something else to spend money on and carry with you though, so we’re not sure it’s really a solution.

It seems there's really nothing wrong with putting your bike upside down then providing you're careful, making it easier to sort a mechanical or flat tyre. It's an interesting debate that clearly gets some people worked up though, and there are pros and cons for doing it. We'd love to know what you think so getting down into the comments section and let us know.