Take a look at the Cube Litening C:68X ridden by Biniam Girmay to Gent-Wevelgem victory

“I just became the first African rider to win a classic!” Find out about the bike that the Eritrean rider did it on
by Mat Brett

Eritrea’s Biniam Girmay of Intermarche-Wanty Gobert became the first African rider to win a World Tour classic at the weekend when he sprinted to victory at Gent-Wevelgem, and this (below) is the Cube Litening C:68X he did it on.

“This historic victory is so important for myself, for my team, for African cycling,” said 21-year-old Girmay. “I never imagined ending this day with a victory, because it is so difficult to race the Flemish classics without experience… I launched my sprint with 250 metres to go, I closed my eyes and I gave all I had left. I don’t realise what happened yet. I just became the first African rider to win a classic!”

It's the bike in the Tweet (above) that Girmay actually rode for Gent-Wevelgem. The pictures at the top of the page (@cyclingmedia_agency) and down below are from a training camp earlier in the year. It's the same make and model of bike in these pics, but with deeper section wheels and a couple of other small differences ... just in case you were confused.

The Litening C:68X is an aero road bike that first appeared in the 2020 model year. It’s a bike built to go fast as efficiently as possible.

Cube says that it made extensive use of computational fluid dynamics (CFD) and real-world wind tunnel testing – standard means of developing aerodynamic efficiency – to achieve a 30% reduction in drag over its previous model, with an integrated fork, stem, handlebar and seat post, and fully internal routing. The Cube designers reckon they honed the design with over 1,000 hours of flow simulations and 100 hours in the wind tunnel, and that the completed bike pushes the UCI’s technical rules to the limits.

The result is a stealthy machine that displays most of the features that we’ve come to expect of aero bikes over the years: deep fork legs, head tube and down tube, for example, a cutaway seat tube that arcs around the leading edge of the rear wheel, and a deep section seat post.

Cube also developed its own integrated handlebar/stem to reduce the frontal area. There’s really not much height to the stem section, although it is wide to allow the shift wires and brake hoses to be routed internally around the fork steerer tube and from there into the narrow head tube. The Litening C:68X is compatible only with electronic groupsets – Intermarche-Wanty-Gobert uses Shimano Dura-Ace Di2 – and it’s disc brake only.

Not surprisingly, Cube says that the C68X carbon fibre is lighter and stiffer than the carbon it was using previously. That has to be the most common claim in cycling tech. The 68 refers to the percentage of fibre (as opposed to the resin) used in the material.

Cube says that the use of this carbon fibre has helped it achieve a frame weight of 960g (size 56cm). That’s pretty light for a disc brake aero frame although newer models – such as Specialized’s Tarmac SL7 – have come along since and redefined what ‘lightweight’ means in this sector.

The Cube Litening C:68X uses 12mm thru-axles and flat-mount callipers which are typical now. It offers two different bottle cage positions on the down tube. The lower position will give less drag but you need to use the higher mounts if you’re taking two bottles. 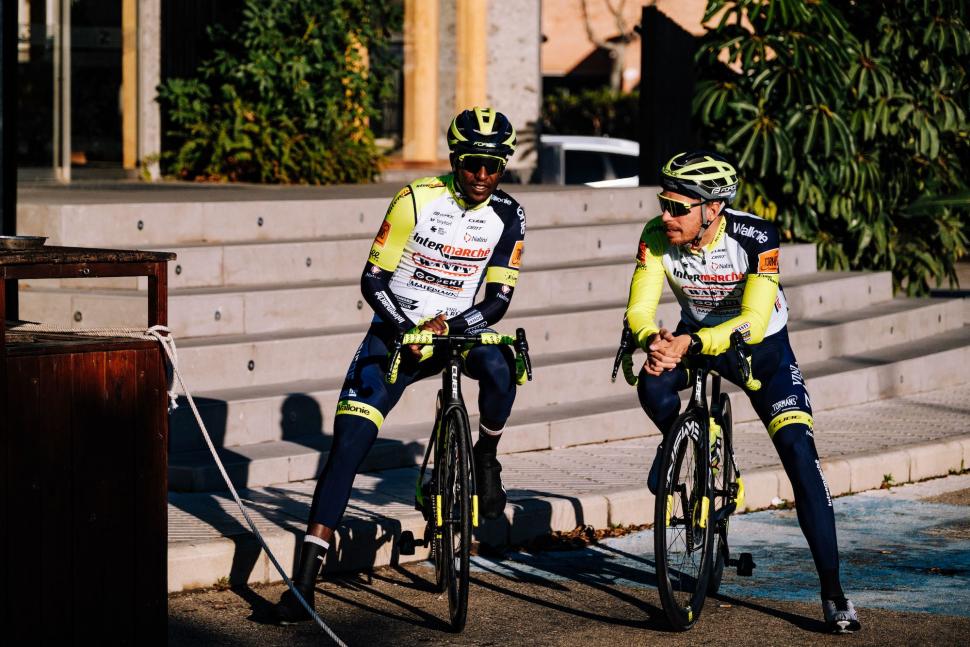 As mentioned, Intermarche-Wanty-Gobert uses Shimano Dura-Ace Di2 groupsets although that looks like the 11-speed 9100 version on Biniam Girmay’s bike, as opposed to the latest 9200 equipment. Supply has been a huge issue with the new Dura-Ace. The rear derailleur cage, with oversized pulley wheels designed to reduce friction, is from Ceramic Speed.

The wheels are from Germany’s Newmen. The carbon rims are marked R.42 so, in line with the brand’s existing naming system, they’re presumably called the Newmen Advanced SL R.42 Streem although this particular model isn’t on the UCI’s list of approved wheels yet. Various other depths are already available.

The wheels are fitted with Continental Grand Prix 5000 TL tyres which the team runs tubeless with Effetto Mariposa sealant inside to repair any punctures.

Italy’s Prologo provides the saddle and handlebar tape, and the bottle cages come from Elite.