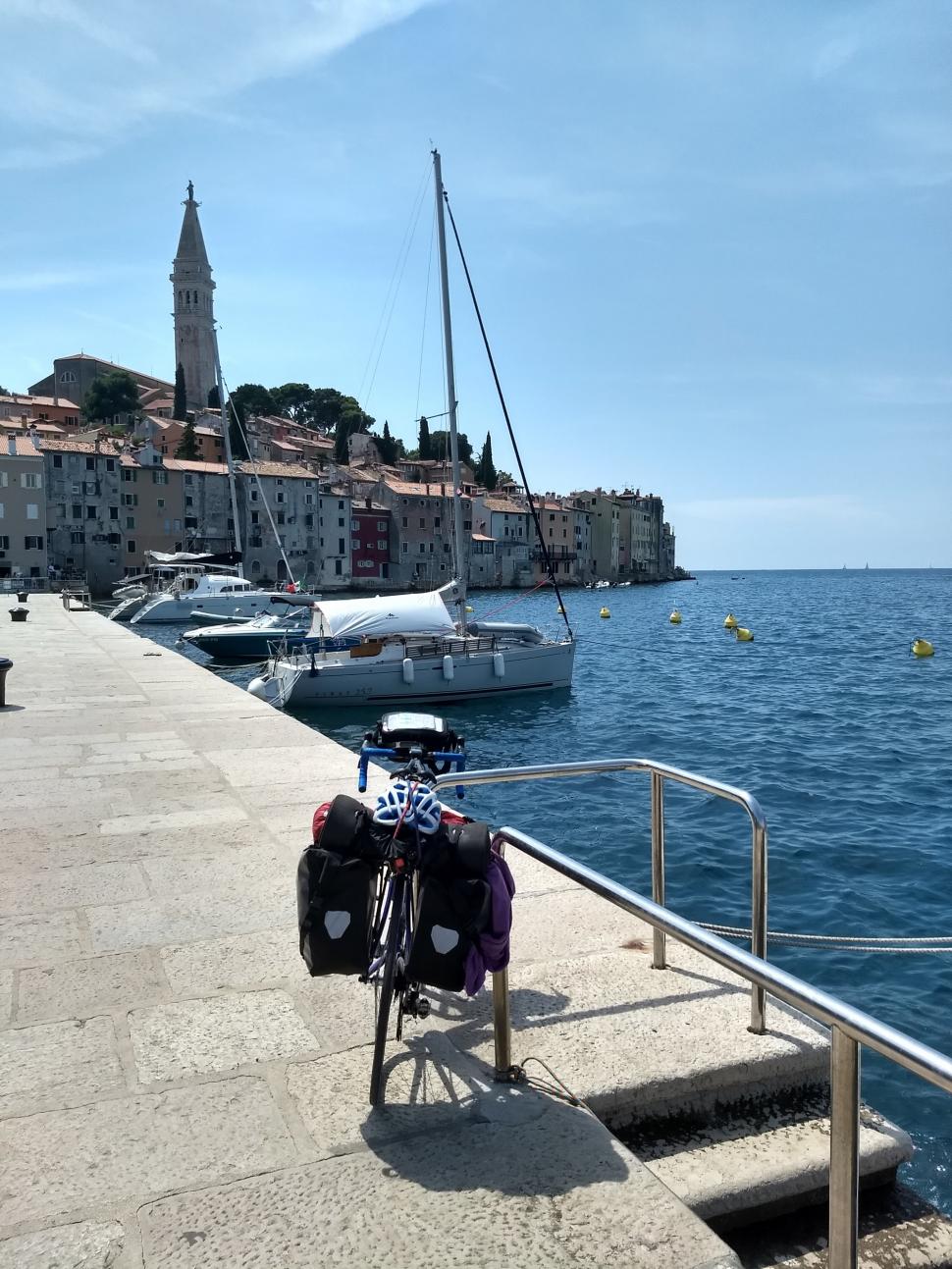 Since quitting racing almost seven years ago, my enthusiasm for touring has grown massively. My appetite has been fuelled by tours of some amazing countries and regions – Iceland, Morocco, Tuscany, Svaneti (in Georgia), Scotland, to name just a few.

My day-to-day job (maths teacher) requires constant planning and preparation; in contrast, when I tour I rarely have a plan! Initial packing of my bike and kit for any tour is the only meticulous routine and preparation I follow. This ensures that I can at least start riding at the other side. Thereafter, I tend to just go with the flow!

If I’m flying to the start of a tour, the bike and all my kit go into a cardboard box from a local bike shop. I bin the box on arrival. The bike is well protected, surrounded by my tent, roll mat, and stuff sacks containing clothes. I cable-tie a piece of old tyre to the chainring to protect it and have hard plastic rivets in the forks and rear chainstays. The front mech is off and taped to the frame. I take the pedals off. I have gone with this set up for so many tours and it’s worked every time. It requires only a little work at the other end and no more tools on top of what I would take anyway.

I’m careful to pick smaller airports. This summer was no exception. In fact, it’s a great example of what they offer. I flew to Pula, in Istria, Croatia. Within 10km you can be on a beautiful beach, or inland on a quiet lane. I’d always opt for a small airport if I’m flying as they are invariably so much easier to navigate away from. It’s also easier to find a quiet corner to build the bike up without attracting too much attention or offending anyone.

I’ve done tours from the doorstep. Living in the Cotswolds is great as we have good access to Wales. There is nothing more satisfying than rolling away from your own home for a short tour. There's no transportation to the start to organise and no need to worry about the route for at least the first day! If the familiarity of local roads doesn’t appeal, jumping on a train is an option too. I can’t say that all of my train-bike tours have been smooth experiences and it definitely does pay to plan a little if you are taking this option.

I was relatively well loaded for this summer’s month-long tour. I’ve done plenty of summer tours with very little kit. If you choose to credit card tour – staying in hostels and hotels, so you have the comfort of a bed, and a roof over your head at the end of the day – you can ditch the panniers and go super lightweight with just some spare clothes and essential tools. A saddlebag, framepack and bar bag would be more than enough.

This time, I committed to camping for the majority of the tour, and this means that the kit list immediately extends to a sleeping bag, silk liner, pillow case (to stuff with clothes) and a camping mat. Admittedly, only the first one of these is essential, but most seasoned tourers will tell you that comfort and warmth are worth carrying! Cooking kit gets thrown in too, with a pending purchase of a gas canister at the other side. I swear by Alpkit for cooking equipment.

While the camping option means a significant increase in load and may initially be a huge expense (investing in quality really does pay off here), it has so many benefits. There’s the obvious long-term saving on food and accommodation, but the ultimate reward is the freedom that it offers. Even if you aren’t tempted by wild camping, established campsites are easier to come by than hostels and hotels, especially in areas where you are likely to ride. Finding accommodation where you would like to be at the end of a day’s riding during peak season can be an absolute nightmare. Going off your intended or planned route is often a hassle and, if you are riding to a schedule, can mess up subsequent days.

For my own peace of mind, I normally know where I’m stopping on my first night. In Croatia had my eyes on a campsite inland. I tend to shy away from tourist areas and had seen much of the coast last year anyway. It turns out my choice of campsite was actually close to the Parenzana Trail, an established, long-distance mountain bike route taking in Croatia and Slovenia. This is another massive advantage of camping over credit card touring – you meet so many people enjoying adventures, willing to share experiences and offer priceless tips for what could lie ahead. I had done a few hundred touring miles in Istria last year, so was happy to head in a relatively direct line to the Slovenian border. I like to find my own way through a country using a combination of established bike routes, minor roads and trails. Istria is certainly not short of routes and whether you are tempted to tour or not, it’s an absolute mecca for any cyclist – road, gravel or MTB. Check out Istria Bike for a flavour of what is there.

Istria is, in my opinion, the most beautiful part of Croatia, it really does have character. Pula’s amphitheatre rivals that in Rome and gives just a tiny hint of the varied influences that have created the region that it is today. After the Austro-Hungarian Empire (preceded by a whole catalogue of rulings that I won’t even go near), Istria was handed to Italy (and a small part to Slovenia). You really sense the Italian influence when riding through it. Think of vineyards, olive groves and picturesque, fortified towns perched on steep hills – Motovun, Buzet and Hum, to mention just a few. The food and drink are all out of this world and only by touring do you find the true hidden gems that are local cafes and restaurants serving food that you will never forget.

Within two days I was crossing the border to Slovenia, a country that was also on the itinerary last year, but only a small part of it – the Soca Valley. I really felt like I had unfinished business.

Check in next week to hear about the gravel paradise that is Slovenia, camping hints and Europe’s endless, enviable cycle routes.