Condor is a British bike brand known for doing things with a touch of style a long time part of the London cycle scene they do more than just make and sell bikes for riding around London – although they also do some pretty cool bikes for doing just that.

Stars of Condor's 2010 range are their new Leggero road bike, a geared version of their Tempo fixed bike… it's still fixed though, and a new wheel size option for their classic tourer, the Heritage. There are also a some new additions to their wheel and component ranges aimed at the fixie crowd and new colour schemes for other bikes in the range including Condor's most popular model the Fratello (catch 'em in the gallery).

Although the new range was on show at last month's Cycle Show in London, where it grabbed plenty of attention all the details had not been totally finalised in terms of spec and colour choice so this is your first chacne to see the Condor's star turns in their final guise. First up is their range topping road bike, the Leggero which gets much more than a makeover for 2010. In may respects this is a new bike, the back end is lighter and more compliant than the '09 model – intended to better complement the the front which Condor stiffened up on the '09 model with an asymmetric head tube that flares from 1in 1/8 at the top to 1in ½ at the bottom race where it meets the fork crown, the idea being that the greater area here helps spread loads and dissipate shocks and stiffen the bike up when you are putting a lot power through the front end in a sprint.

As you'd expect Rapha Condor race on the Leggero, one of the reasons for offering a Di2 compatible frame is no doubt because that's the groupset they will be using next year. Team riders have been closely involved in testing this new bike. In fact, is pretty much the special edition machine that National Road Champion, Kristian House rode in the Tour of Britain, that machine featured a lighter, stiffer rear end it also featured carbon dropouts, as does the new Leggero. Interestingly although Condor say the new back end is lighter (it features a cutaway section and those carbon droupouts so you'd expect it to be) the claimed average weight for the frameset stays the same at 1000g. Condor told us that they were confident that the new frame is roughly 100g lighter, thanks to that back end, they are playing safe on claimed weights until they've had the final production frames painted which seems fair enough.

Like asymmetric head tubes internal cable routing is another feature which is becoming pretty much standard issue on top end road bikes and the new Leggero is no different, and there is also a Di2 compatible frame option too.

The frameset price for the Leggero stays the same as the 2009 model at £1599 and then there is also a myriad of different build options available on all their bikes. Once you've chosen your frame you can then go on to chose:

On top of that they also offer a free fitting service so that when you get the bike it's set up exactly for you. Condor expect to have stocks of the 2010 Leggero from mid-January. We're fans of Condor's Tempo, a fixed/singlespeed and part of their urban range of bikes one of the reasons we like it so much is that in standard guise it is such a versatile machine – great for riding around town, but also a great winter trainer or commuter thanks to geometry that is much more road bike than track iron.

For 2010 there's a new version the S3X – a fixed bike with gears. Condor have got their hands on Sturmey Archer's new 3 speed S3X hub. We saw the S3X hub at Eurobike and the bikes sporting it at the Cycle Show in London caused a fair few ripples – including this one. Fitting the S3X in effect adds hill power to a fixed bike… well, for going up anyway. Direct drive on the S3X hub is the top gear, so you are using the others to change down, first gear is - -37.5%, second gear -25%, and third gear direct drive, that gives the following gear steps: gear 1 to gear 2 :2: 20%, gear step, gear 2 to gear 3 3:33%

In theory once you'd shot up a hill you could try and freewheel down the other side too rather than going for the leg ripping option which comes as standard for riding down big hills on a fixed. However, it's probably a lot wiser to give the old legs a bit of a ripping than risk one of the gears engaging with all the unpleasant consquences that might have.

Fitting the S3X to the Tempo massively increases the versatility of what is already a very versatile macine it should certainly increase it's attraction as a winter training bike – if a rather expensive one, but it would also make for a great commuter too. Condor have been testing the bike for nearly a year and were confident enough of its performance to have a fully working version at the Cycle Show.

Whichever version of the Tempo you go for you'll get a very decent frame, TIG welded rather than lugged, from triple butted, heat treated Deda SAT Chromoly steel which is matched up with a Deda Black Rain carbon fork with a carbon steerer, the average frame weight is 1.8Kg and the fork weighs 580g. When it comes to steel bikes Condor are from the curved rear stays equal comfort school of thought and having put some miles in on a Tempo I'd have to say that it certainly is a very comfortable bike.

The frame has the necessary eyelets for mudguards and you can also fit a rack too – if you do fit 'guards then forward facing droupouts mean you should be able to get the rear wheel out without having to take off the mudguard. A Tempo frameset costs £499, and prices for the SX3 build start at £1062 and for 2010 the Tempo is available in a choice of either Seafoam or Grey colour schemes and all Tempo frames will have stops so that SX3s can be fitted. The Tempo SX3 will be available later this month. 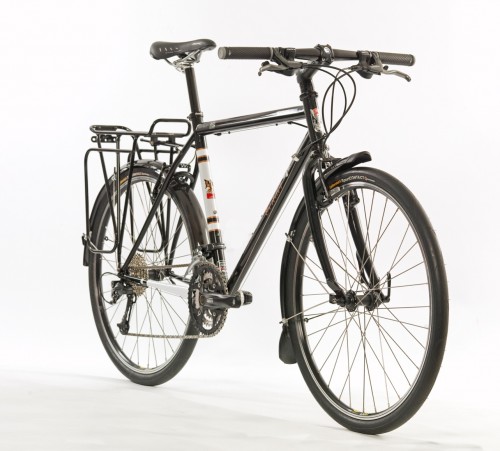 Outside of the UK touring bikes with 26in rather than 700c are often seen as the classic touring choice and that wheel size has plenty of fans among British touring cyclists too. For 2010, the Heritage, Condor's take on the classic British steel tourer is available in a new 26in wheel version. Everything else is the same, the back end – shared with the sportier Fratello and the usual array of braze ons for mudguards and rackss which mean you can really load it up front and back, including fitting lowrider panniers to the Tange Prestige fork. As well as a choice of wheel size the Heritage has a new colour option for 700c frames, Champagne, as an alternative to Racing Green – the new 26in Heritage will only be available in black… well Rome wasn't built in a day. The new 26in version of the Condor Heritage will be available in February 2010.

The complete Condor 2010 range will soon be appearing on the Condor Cycles website www.condorcycles.co.uk