Specialized continue to sponsor three WorldTour teams in 2014, and one of those is Tinkoff-Saxo, the team now wholly owned by Russian businessman Oleg Tinkoff. They’re sticking with Specialized for the season, the US company supplying not only its Tarmac SL4, Roubaix SL4, Venge and Shiv bikes, but helmets, cranks and shoes as well. Here's a look at Roman Kreuziger’s Tarmac SL4. The most common bike the Tinkoff-Saxo will be racing is the Tarmac SL4. We see the same with the other Specialized sponsored teams. That’s because it’s the lightest and stiffest bike in the range, the best all-round choice. It’s ideal for climbers like Alberto Contador, and for the faithful domestiques too.

The Tarmac SL4 on this page belongs to Roman Kreuziger, who from the sounds of it really likes it. Well, he would say that wouldn't he. "My main bike is the Specialized Tarmac SL4 and I love it. You can use it in all conditions and over all terrain. I’m also looking forward to riding it in my new kit. It’s a fantastic design – I love the yellow – and it goes really well with my tanned limbs!’ The bikes have had a new lick of paint this year to match the new jerseys, there’s a lot more blue and yellow on the frame, a real improvement over last year’s design. Less subtle maybe. The Tarmac SL4 is getting a bit long in the tooth now, it’s been a few years since this Tarmac model was introduced. The series was first launched way back in 2005.  This latest incarnation is the lightest yet, at about 950g. It’s made from the company’s own FACT IS 11r carbon fibre. FACT refers to the ability to be particular about the lay-up of each layer of carbon, so the designers can adjust the directional stiffness and vibration absorption of a frame for a given requirement. There are some interesting details. The tapered head tube has an hourglass shape to reduce material, and uses a 1-3/8in lower bearing, which goes against the 1 1/2in bearing size that most other manufacturers are using. Their reasoning is lighter weight.The bottom bracket and chainstays have been moulded as one-piece, leading to the impressive stiffness the frame exhibits when you stand on the pedals. Details like the dropouts, and those on the forks, are carbon too. Like most modern high-performance frames, all the cables are routed internally. 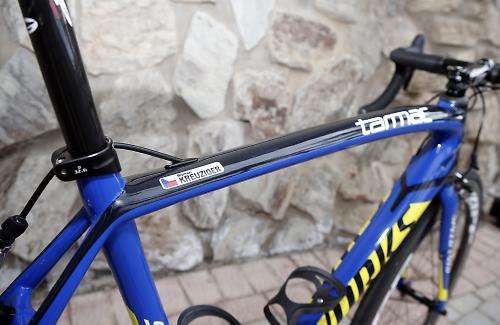 The only departure from SRAM is the Specialized S-Works carbon crankset, with an SRM Powermeter in place of the spider. Zipp’s Service Course stems, bars and seatposts are used. Roman uses what appears to be a 13cm stem, slammed onto the carbon top cap and no spacers in sight. It’s the PRO way. They’ll have the full compliment of Zipp wheels at their disposal, Roman’s bike here is pictured with a pair of 404 wheels, a common sight for most races and stages. They’ll probably switch to 202 for the hilly races. The team will fit the wheels with Specialized 24mm Turbo tyres. Roman’s saddle choice is a Prologo Nago Evo CPC, with the innovative cover that aims to reduce saddle slip. The team use Look pedals, Roman here is using the new Kéo Blade 2 pedals. It’s a new version of the Kéo Blade pedal that’s lighter than before, with a lower stack height and a larger cleat contact area. Look also say that the Kéo Blade 2 has better aerodynamics. The aero Venge will be favoured by sprinters and breakaway specialists.  The Venge was the result of a collaboration with F1 team and car manufacturer McLaren, who helped develop the aero frame before its launch in 2011. It gets the same build kit as the Tarmac SL4. 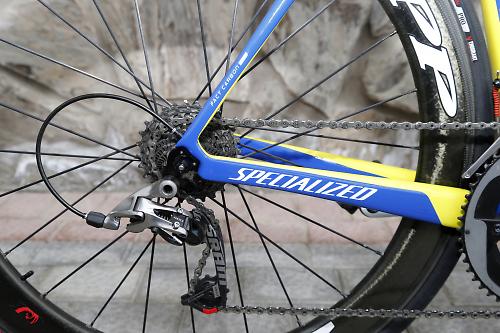 The frame draws on the F1 team's aerodynamic expertise with a a 3:1 airfoil fork with a narrow leading edge, along with a narrow (1 1/8in at the top to 1 3/8in at the crown) tapered head tube to minimise the frontal area leading to a reduction in drag. The shaped seat tube curves around the rear wheel and the seat stays have an airfoil shape with a flat outer surface and rounded inner surface to improve the performance in crosswinds. Naturally, cables are routed internally. Specialized claim it saves 23W at 45kph compared to their SL3 road frame.

For the cobbles of the Spring Classics the Roubaix SL4 is a proven performer and will be called into duty - it’s the only frame here that will take the wider tyres that most teams prefer to race. We don’t have any photos of that bike yet, they’re likely to be kept hidden away until the Classics.

Specialized now has its own wind tunnel, which they opened last year. They have been putting it to good use, using it to examine Contador’s position on the road bike. “One of the things we examined was yaw sweep. This is where we test the impact of wind on the rider and bike over angles of +25° to -25° in increments of 5°,” says Specialized global marketer Chris Riekert. “We also tested Contador on the hoods, drops and tops; with different helmets; in different body positions; and with both his favoured Specialized bike, the  Tarmac, and the Venge. We’re trying to build up a profile of what his specific needs are at all speeds and every training scenario.”

Aerodynamics is playing an even bigger part in road racing, as manufacturers and riders gain greater understanding of its impact and how to find improvements. It used to be time trials where aerodynamics really mattered, but these days sprinters are as keen on aero, and increasingly climbers are looking at what aero gains can be achieved. The speed at which the top guys like Chris Froome and Alberto Contador climb makes even small aero gains going up the mountain a potential advantage. “We can then take that aerodynamic data and plug it into, say, what happens if Contador’s climbing Ventoux and there’s wind coming from this angle. What’s going to be the best product for him?” addsChris.

But testing in a wind tunnel is one thing, being able to maintain the optimum position while cycling is another matter entirely. To test the new positions, Specialized took Contador to a velodrome and using a laser sensor mounted to the top tube, could track the position of his chest, chin, head, hands and arms, and ascertain whether he can maintain the original position for the duration of the test.

Specialized also supply the tram with its helmets. The Prevail for the road, the newer Evade aero helmet, and the McLaren time trial helmet.