Geraint Thomas started his race season at the Tour Down Under, here's a look at his Dura-Ace and Stages-equipped Dogma 65.1 Think2
by David Arthur @davearthur

Welshman Geraint Thomas kicked off his 2014 race season with the Tour Down Under, and he was riding the Team Sky issue Pinarello Dogma 65.1 Think 2, equipped with a Shimano Dura-Ace Di2 groupset, PRO wheels and finishing kit, and new Stages power meter. In essence it is exactly the same bike Thomas and the rest of the Sky squad raced last year, aside from the switch from the SRM Powermeter to Stages power meter. Oh and there's a bit more blue on the frame this year, with stripes on the forks matching the rear stays and top tube stripe. Why change a winning formula. 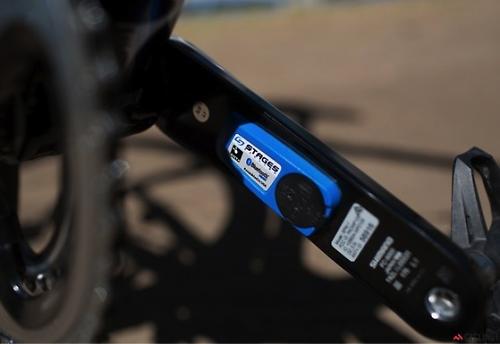 Pinarello first introduced this Dogma at the 2012 Tour de France, but the team didn't really transition from the previous Dogma until the beginning of the 2013 season. We don't expect a full replacement for this bike this year, but we wouldn't be surprised if the Italian company doesn't have something up its sleeve for the summer. A lighter version perhaps? An aero Dogma?

At 6ft  (1.83m) tall Thomas chooses a 56cm size frame, the same as his team mate Sir Bradley Wiggins. PRO, a component offshoot of parent company Shimano, supplies the team with custom stems. Fit is a really important aspect for all professional riders, it's something Team Sky, like all the other teams, take very seriously. Few teams get custom stems like this though. Thomas specs a 121mm stem. It's alloy as well, and painted in Sky colours. He also rides an alloy PRO handlebar, with a little blue stripe on the left side. That's a nice detail. 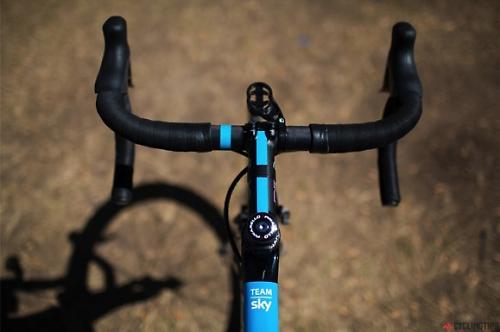 As the team are now running Stages power meter, they've opted for Garmin Edge 500 and 810 computers to gather up all the data and record it for the coaches to analyze at the end of each day. They've chosen the BarFly 2.0 out-front mount, which has two positions to suit the smaller and larger size Garmin computers. The mount can also be used to carry the Shimano Di2 control box, but the team instead prefers to fit the control box to the underside of the stem, as last year, using the supplied rubber band. 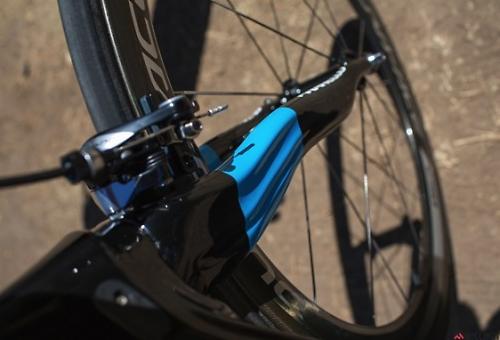 It’s an all Shimano drivetrain and rolling stock. A Dura-Ace Di2 9070 11-speed groupset with Dura-Ace C50 tubulars, fitted with 25mm Veloflex tyres. We're seeing the peloton switch increasingly to 25mm tyres after decades of 23mm tyres, with the conclusion being the wider tyres are faster and allow lower pressures to be run without any compromise in speed, giving the benefit of a bit more traction from the bigger footprint, plus a but more bump absorption.