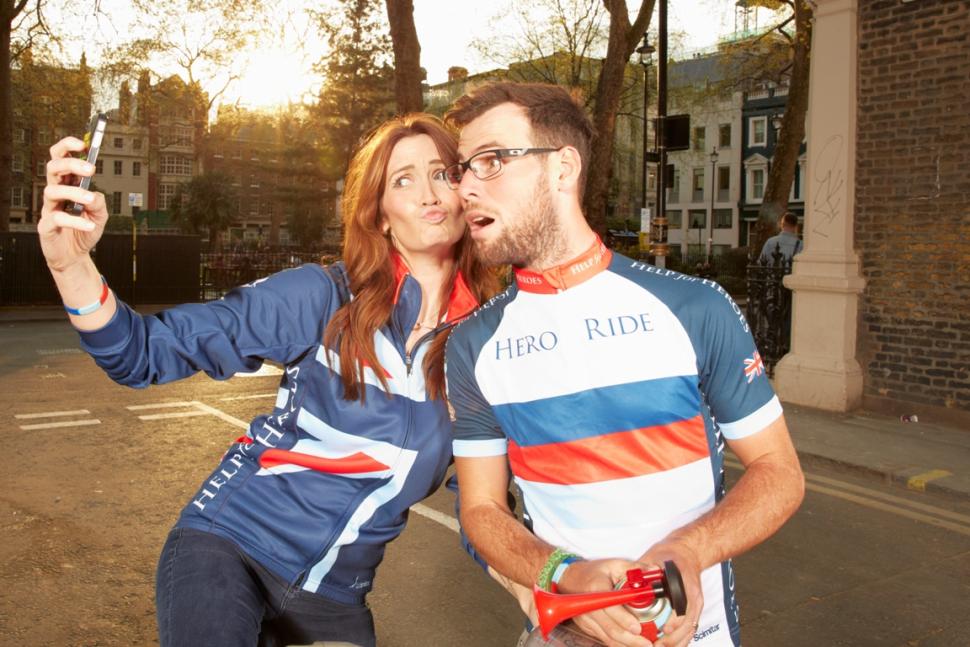 Mark Cavendish will take time out from his preparations for the Tour de France in June to ride alongside 2,000 cyclists in London on the Hero Ride 2014 – and one of them will be his wife, Peta, who in the preceding days will have ridden 335 miles from Brussels to Paris in aid of Help for Heroes.

The armed forces charity could not be closer to the couple's hearts; they met at a Help for Heroes event in California in 2010. Now, they are encouraging people to sign up for one of its rides in June, or devise one of their own and join them for the final 10 miles from Blackheath to Horse Guards Parade in Central London.

The series of challenges in June include the Big Battlefield Bike Ride that Peta is taking part in, as well as rides from Edinburgh, Manchester, Cardiff and the Help for Heroes Recovery Centre at Tedworth House, Tidworth, Wiltshire, all of them converging on London on Sunday 8 June.

On arrival in the city centre, wounded servicemen and women taking part in the ride will lay wreaths at the Cenotaph on Whitehall in remembrance of fallen comrades and those who have also been injured while on service.

The charity is aiming to raise £1.5 million through the rides, part of which will go towards its two big projects for 2014, the Hidden Wounds Psychological Wellbeing Programme and an expansion of the Northern Help for Heroes Recovery Centre in Catterick, North Yorkshire.

“The Hero Ride is an amazing opportunity to cycle alongside our wounded men and women and to hear their inspirational stories,” said Mark Cavendish.

“I’ve seen how Help for Heroes supports them and their families and in 2014 that support is going to be more important than ever. I’d urge anyone who has ever thought about doing something life-changing or challenging to do their bit and sign-up and donate to the Hero Ride.

“I am truly honoured to be starting the Grand Finale and it will be very emotional for me as I reunite with Peta who is attempting a gruelling 335 miles and I will be so proud to cycle alongside her and 2,000 others into Horse Guards Parade on 8 June.

“The great thing about Hero Ride is that you can choose to do your own ‘DIY’ Hero Ride and cycle whatever distance suits you – be that five miles or 500. Anyone can get involved and I hope as many people as possible sign up to Hero Ride, donate to Help for Heroes and come down and join us in London on what will be an incredibly memorable day.”

His wife Peta, who is undertaking her third Big Battlefield Ride, added:  “Both Mark and I are so proud to be Patrons for Help for Heroes and we will be heavily involved in supporting Hero Ride 2014.

“This will be a bold challenge for me – I usually leave the cycling to Mark – but I cannot wait to show my support to those amazingly courageous servicemen and women and look forward to seeing the British public in their droves in London once again on 08 June.”

Help for Heroes co-founder Bryn Parry said: “Troops may be withdrawing from Afghanistan but our support will be there for those who are injured and their families, for life.

“Our ambition is for Hero Ride 2014 to be bigger and better than ever before and I would like to see the British public continue with their generosity for our heroes. Cycle with us, donate to our good cause and show your support with pride,” he added.

You can find more information about the various Hero Rides here.