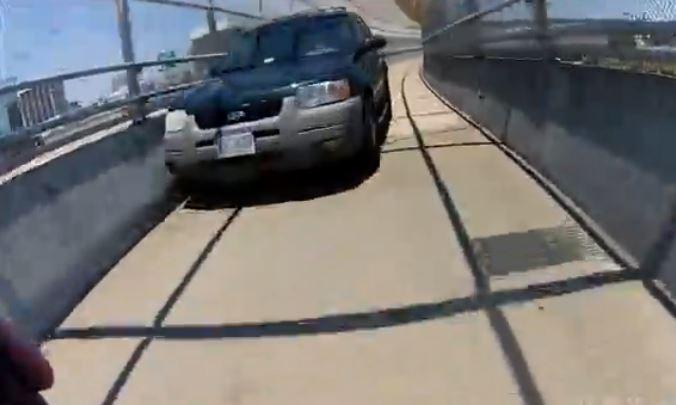 Separate infrastructure is not always enough to protect cyclists and pedestrians from injury, as this video from the United States shows, with a bike rider struck head-on by a vehicle while riding across a footbridge – although it transpires the driver may actually have been permitted to use the segregated path.

Cyclist Kelley Howells escaped serious injury as she rode on a caged-off pedestrian and cycle path running alongside the Berkley Bridge in Norfolk, Virginia on Saturday when she was struck by an SUV travelling in the opposite direction.

Ms Howell, who suffered cuts and bruises in the incident, told WVEC-TV: “I saw this vehicle. Oh, my God. Brake. Scream. When I realised I was hitting him, there was no way to stop it.”

She said that the driver was unable to explain why he was there, and when she tried to present video evidence to a police officer, he was unimpressed.

She was also told police were unable to investigate the incident because an officer had not been called to the scene at the time, though neither the driver nor the cyclist had a mobile phone with them.

Ms Howell said: “[Norfolk] wants to be a bike-friendly community. It’s hard to see how if they have police officers who don’t feel the need to investigate motorists driving on pedestrian bridges.”

Yesterday, the Virginia Department of Transportation (VDOT) confirmed that one of its contract employees has been put on administrative leave while they investigate the incident.

In a statement it said its employees are permitted to drive on the pedestrian path, and there are signs warning people on foot and bikes that its vehicles may be present.

A spokeswoman said: “VDOT is working with its contractor to determine the factors involved in the incident and to ensure that proper policy and procedures were followed.”

1
Video: Slow-moving driver forces cyclist off the road on Woodhead Pass
2
Fernando Gaviria tests positive for COVID-19 – for the second time this year
3
Jumbo-Visma, GreenEdge and Sunweb swap bike suppliers for 2021
4
Near Miss of the Day 481: A very scary close encounter with 'Farmer Giles' (includes swearing)
5
Cycling Time Trials teams up with law firm for advice to new bike commuters
6
“Cartoon-car” bike rack removed from Lincolnshire town as locals miss the point
7
Near Miss of the Day 482: BMW driver in high-speed close pass
8
New airtight bike frame can be used to refill your tyres