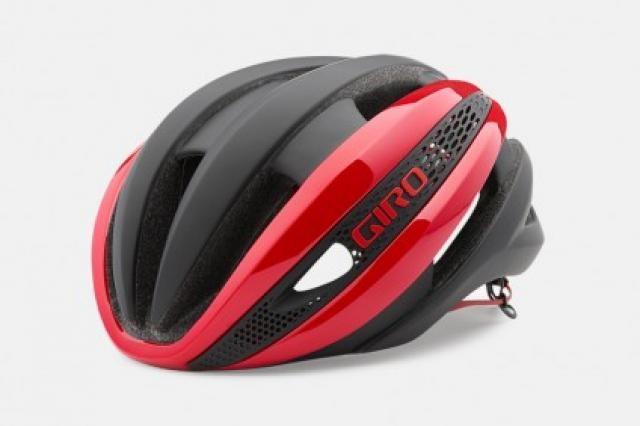 Nearly as efficient as the fastest time trial helmets but with more comfort and ventilation, says Giro
by Mat Brett

“The Synthe is the pinnacle of road helmet design,” say Giro, which is strange because only this morning Smith told us that their new Overtake helmet is, “The most comprehensive road helmet on the market.”

Ah well, such is the world of PR. It has been a big day for aero-optimised road helmets.

Giro already have a road-style aero helmet in the range in the shape of the Air Attack (£149.99). That helmet looks very much like an aero helmet; a lot of people don’t like its dome-like appearance at all. The Synthe looks more like a regular road helmet with extensive venting and traditional-style ridges.

Giro claim that the Synthe (don't miss the 'n' out or you'll give the wrong impression entirely) is nearly as efficient as the fastest time trial helmets but with much more comfort and ventilation.

Giro have been running teasers on social media over the past couple of weeks saying that the Synthe is 16% faster, 13% lighter and 2% cooler – but faster, lighter and cooler than what?

It looks like they’re claiming the Synthe is 16% faster and 2% cooler than their existing lightweight Aeon helmet, and 13% lighter than the Air Attack.

The weight is a claimed 250g (CPSC version, the US safety standard, in a size medium). The European version might be a little lighter. 250g is pretty light. To put it in context, the Aeon (size medium) we reviewed was 197g while the Air Attack (size medium) was 275g.

Like the Air Attack, the Synthe uses Giro’s Roc Loc Air fit system which comprises a flexible plastic cradle that attaches to the helmet shell at the temples. You get the choice of three height adjustment positions at the back and you control tightness with a clicky wheel. Winding it up and letting out the slack are equally easily sorted with one hand. What's different from Giro's standard Roc Loc System is that there's an inner cradle over your forehead and the top of your head as well, keeping the shell slightly raised to allow air to flow inside.

“Cooling power is further boosted by elaborate internal channeling and a series of massive vents; the Synthe sets a new bar for ventilation,” say Giro.

The Synthe also features integrated mesh panels which we’ve not seen before, lightweight webbing and eyewear docking ports for stashing your glasses when you don’t want to wear them.

This is what US pro Taylor Phinney has to say about it:

1
Five cool things coming soon from Campagnolo, Condor, Rapha, Selle Italia and La Passione
2
Rapha unveils new Pro Team, Explore and Classic Sunglasses with surface enhancement lens technology
3
e-bike TV ad banned for creating “climate of anxiety” (but you can watch it here)
4
Could UK first CYCLOPS junction be "slam dunk" for cycling?
5
“No excuse” – councillor slams motorists who drove on pavement to get round road closure as emergency infrastructure ignored in London and beyond
6
Near Miss of the Day 433: Police tell cyclist “We all have to share the road” after very close pass from lorry driver
7
Boardman Bikes release 2021 road bikes and tease at new urban and hybrid models.
8
Questions over Government’s commitment to active travel after "best and final offer" to repair Queensbury Tunnel