In the shadow of the Kitzbüheler Horn mountain, one of Austria's toughest road climbs and used for a stage of the Tour of Austria, Rose launched their 2015 road bike range. They unveiled five new models, the X-Lite Team, X-Lite CRS, Xeon RS, Xeon DX and Xeon CDX.

The X-Lite Team and X-Lite CRS are the German company’s flagship race bikes. Both use a newly designed carbon frame with slimmer tube profiles to reduce weight and they’ve borrowed the integrated seatclamp first seen on the Xeon Team CGF last year. 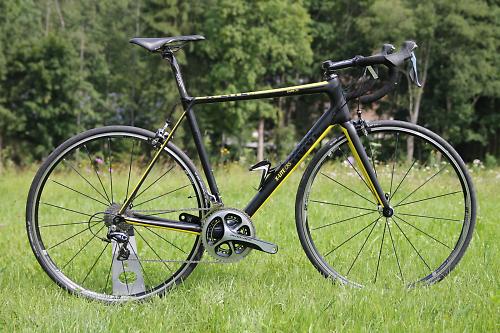 While both the X-Lite Team and X-Lite CRS share visually identical frames, the former uses higher grade carbon fibre to provide a frame with a claimed weight of 800g, while the more affordable model uses a lower grade of carbon fibre to produce a claimed frame weight of 1,100g. That drop in weight comes despite an increase in stiffness, Rose tell us. 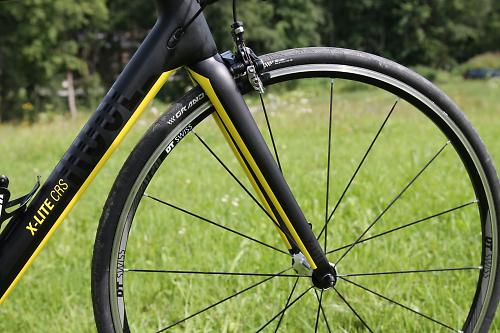 Rose spent two years developing a new carbon fork for this bike. It’s constructed with 40 individual pieces of carbon fibre in the layup and the early samples took a full day to manufacturer. While that development fork weighed a scant 270g, the production fork is more modest with a claimed 315g weight. 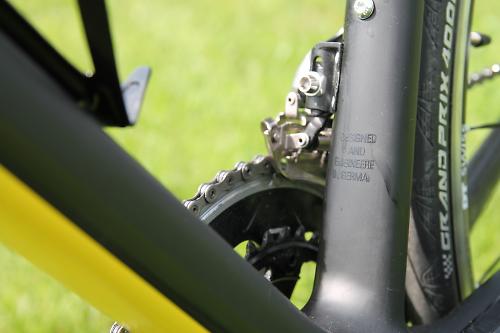 There is space for 25mm tyres in the frame and fork. There’s full internal cable routing on both frames, and they’re both compatible with electronic groupsets. Rose tell us they have designed the internal routing to be as easy to service as it’s possible to make it. 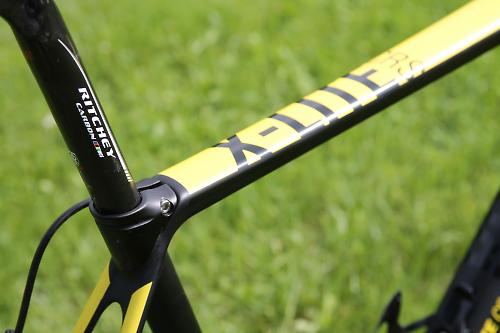 The integrated seat clamp, a design feature carried over from the Xeon Team GF, provides more seatpost extension. Rose told us this feature, first seen last year, is gradually going to feature on all their road bikes and become a signature feature. 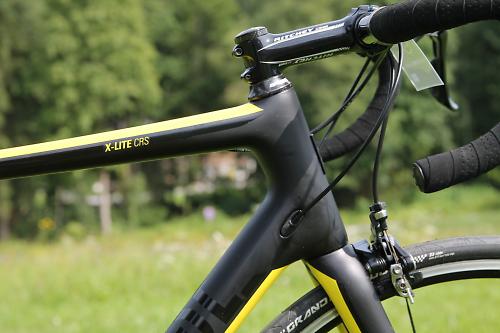 A switch to a 27.2mm seatpost and Ritchey’s Flex Logic seatpost and saddle design are used to enhance the comfort.

Aluminium isn’t dead. Proof, if it was needed, is the new Xeon RS. It’s been totally redesigned for 2015 and now boasts a claimed frame weight for a 57cm of just 1,050g. Apparently an Ultegra mechanical build weighs in at 6.9kg (15.21lb). 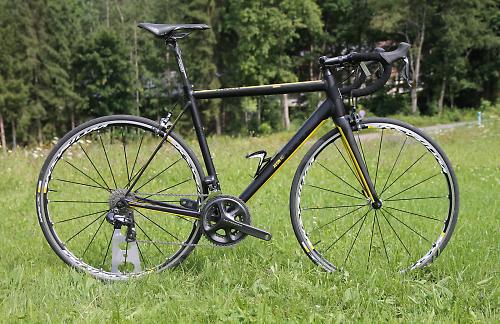 That’s really very light, it bests the benchmark Cannondale CAAD10 and is only a smidgen heavier than the Kinesis Aethein. To achieve the weight loss, Rose switched from 7051 to 6066 aluminium, which they say allows them to reduce the tube wall thickness down to just 0.2mm. 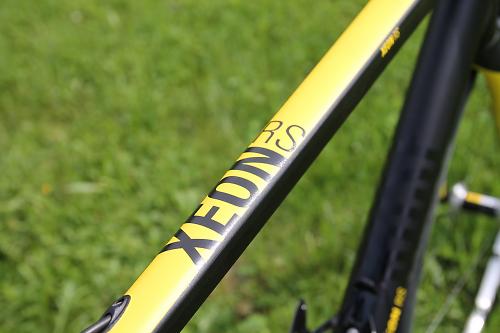 The tubes are also triple butted with the taper sections specific to each size frame. So different tubesets for each size frame, rather than the same tube and simply chopped down to size. They offer the frame in nine sizes from 49 to 66cm. The smallest size is sub-kilo. 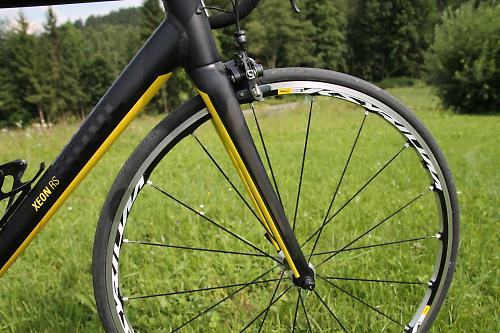 Other details about the frame include a shorter seat tube which provides more seatpost extension for increased deflection, which can aid comfort. It also benefits standover clearance on the smaller sizes. The same new 315g carbon fork developed for the X-Lite is used on this bike. 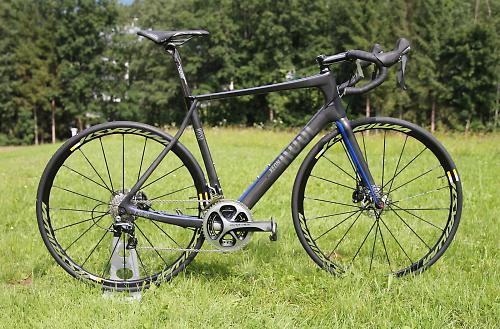 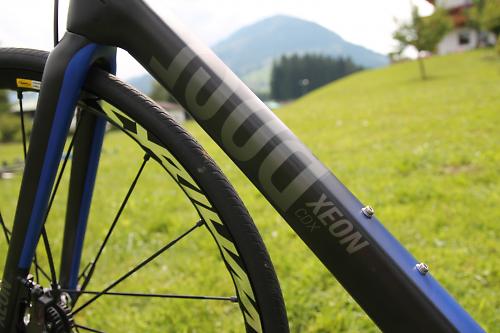 Adding disc brakes to the frame has added about 70g, the frame weighing in at 1,080g. Rose have used their experience of mountain bikes and given the bike bolt-thru axles at both ends, a 15mm front and 10mm rear, with 135mm rear wheel spacing. 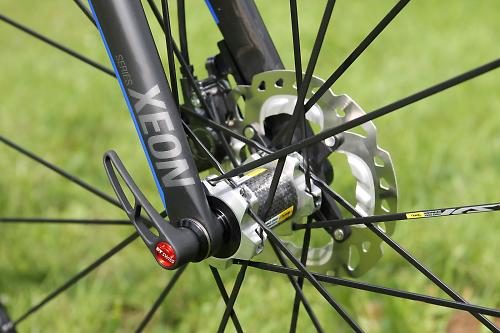 It is possible to use a regular quick release axle in the rear dropouts opening up more wheel compatibility options, a good thing because not all wheel companies are adopting the same standards, so having a versatile design is a smart choice. The aluminium axle inserts are replaceable. 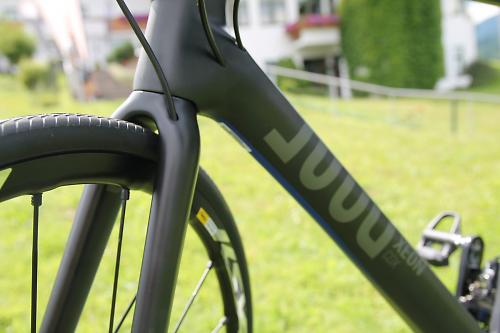 A new carbon fork weighing 380g has been developed. The head tube is 1 1/8in to 1 1/4in tapered. All cables and hoses are internally routed, even the front brake hose passes through the new fork. It’s one of the neatest routing solutions we’ve seen on a disc road bike. 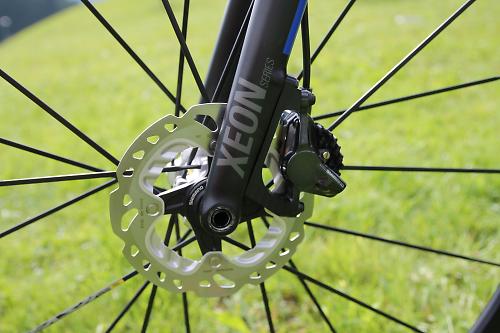 Rose have adopted Shimano’s recently introduced Flat Mount disc caliper mount standard, though the bikes use an adaptor for now. This is a disc mount design that Shimano have developed specifically for road bikes, and provides a direct mount between the caliper and frame/fork, and eliminates the need for special adaptors, and we presume is lighter than the common post mount standard currently being used. 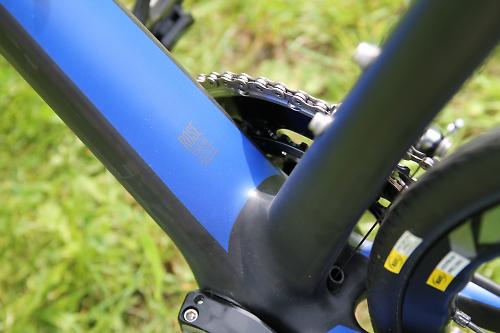 The frame and fork have plenty of clearance for 28mm tyres. The wheels on this bike are the new Mavic Ksyrium Disc wheels. This is the first time we’ve seen these wheels and Mavic aren’t revealing any information until Eurobike. 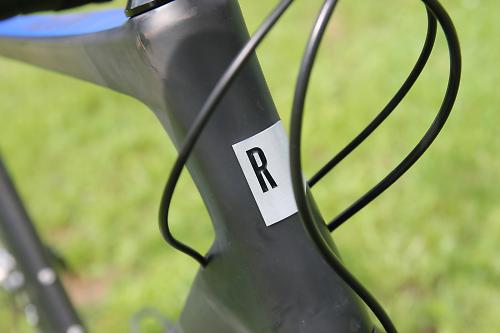 Rose have been offering a disc-equipped bike for a number of years, 12 months ago we saw the Xeon DX with SRAM Red 22 hydro disc brakes. That model has now been updated, and shares the same frame as the Xeon Team GF that they introduced to the range last year, albeit with the new addition of disc brakes. 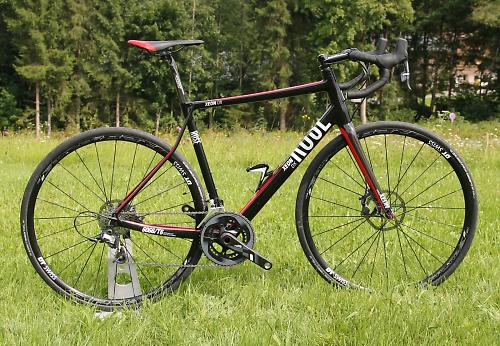 That means the Xeon DX has switched from being a race bike to an endurance model with appropriately relaxed geometry with a taller head tube and shorter top tube. It uses a new 6061 aluminium frame with a carbon tapered fork weighing a claimed 380g. They’ve used Shimano’s new Flat Mount disc standard. There is also full internal gear cable and brake hose routing. 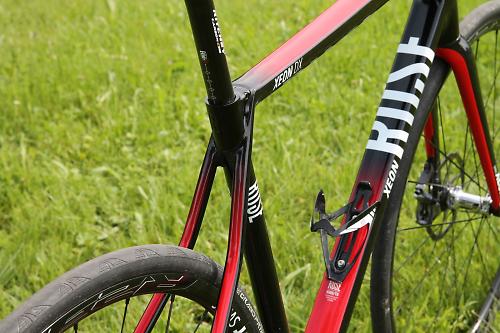 An interesting feature on this particular model are the head tube extension spacers. Normally if you want to raise the stem, you load some spacers underneath, but this can be detrimental to front-end stiffness. 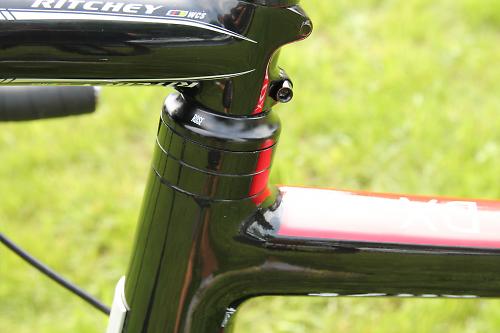 These spacers raise the height of the top headset bearings so a minimal gap between the bearings and stem is maintained, to preserve front end stiffness. It’s a similar system to that used by Argon 18.

I had a good ride on the Xeon DX, including a 1,996m mountain climb, so watch out for my first ride impressions in a future article.

Pricing and availability hasn't been announced yet, we'll update this article as soon as we know. More www.rosebikes.co.uk