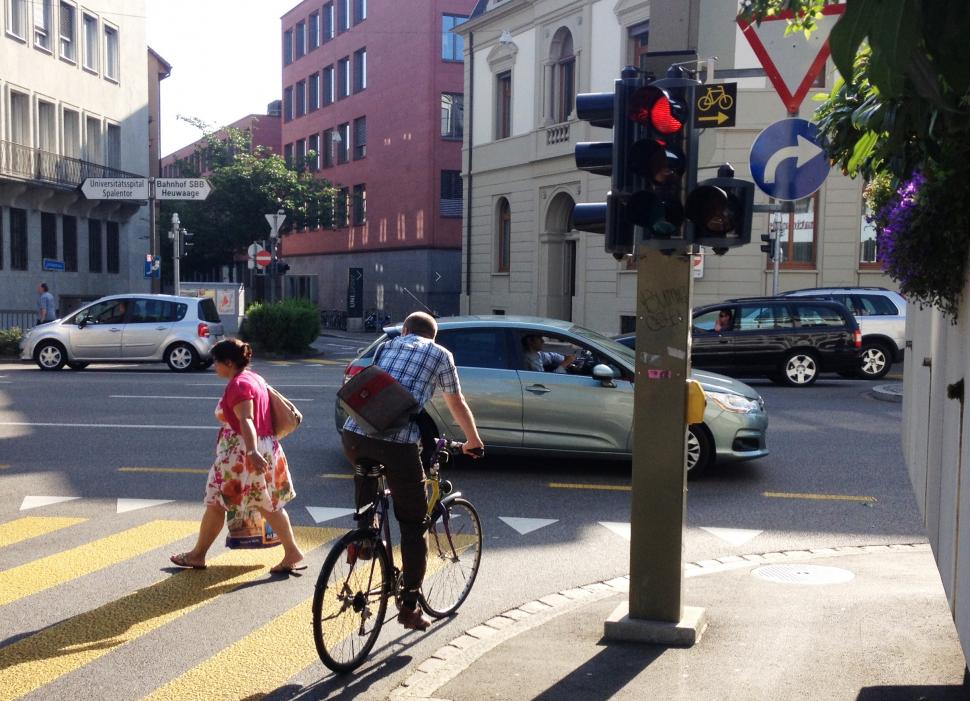 Pilot running since mid-2013 found no conflict with cyclists and cars, and pedestrians in favour
by Simon_MacMichael

Basel, the third most populous city in Switzerland, has been conducting a trial that allows cyclists to turn right at a red traffic light – and the results are a resounding success, with no collisions reported and pedestrians said to be in favour of the experiment.

According to the website of Swiss cycling magazine Velojournal, the trial was launched in mid-2013 by the canton of Basel-Stadt on behalf of the federal government’s roads agency, ASTRA.

The canton’s construction and transport department, BVD, has now said the pilot, conducted at four junctions in the city by traffic management consultancy Rapp Trans, has been “very positive.”

Under the pilot, a yellow flashing bicycle signal meant cyclists were permitted to turn right at red traffic lights, or when there was a green pedestrian signal allowing people on foot to cross the road.

As well as resulting in “significant fewer conflicts between cyclists and cars” – no incidents were recorded – the initiative was also said to be well-received by pedestrians.

Roland Chretien, CEO of campaign group Pro Velo Basel, told Velojournal that he had not heard of any complaints about the pilot.

The magazine says that the BVD intends to ask ASTRA for authorisation to extend the pilot scheme, as well as a change to traffic regulations at federal level to allow it to applied permanently – also raising the prospect that other places across the country could follow suit.

A similar trial has taken place in some parts of Paris, commencing in 2012, while last week the Australian state of Victoria said that it was considering letting cyclists ride through red lights, among other possible measures aimed at improving the safety of cyclists.