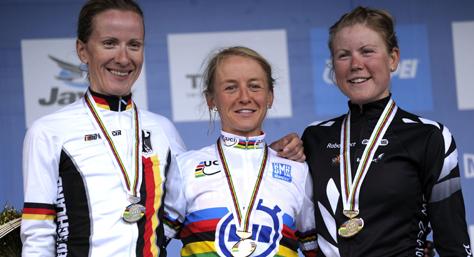 You know you want to: registration opens for 105 Km hill climb in Taiwan - Emma Pooley to give it a go

Current British and former world time trial champion, Emma Pooley, is set to take on the 2014 Taiwan KOM Challenge, a 105km ‘hill climb’ which anyone can enter. The event sees competitors scaling the 3,275m Hehuan Mountain after starting off at sea level and if the sheer relentlessness of the climb is not enough, a 27 per cent gradient greets the riders towards the top

Now in its third year, the Taiwan KOM Challenge is the centrepiece of the Taiwan Cycling Festival. It sees amateurs from throughout the world competing against a selection of pros for prize money and also the prestige of being the fastest up what must rank as being one of the most gruelling climbs in the world. The event will take place on November 15th and registration is now open at www.taiwankom.org.

Pooley, who recently retired from professional cycling after taking silver medals in the Commonwealth Games time trial and road race, earned an invitation after taking the mountains classification in this year’s Giro d’Italia Femminile. However, while the first man across the line stands to receive a million New Taiwan Dollars in prize money (around £20,000), should Pooley be the first woman to the finish, she will receive just 200,000 (around £4,000).

A 3.1% average gradient doesn’t sound particularly challenging, but as any cyclist knows, averages generally conceal more than they reveal and when that 3.1% extends across 105km, many nasty surprises are hidden. There is even a 4km descent after 85km – height which must of course be regained before the finish.

In the last 8km, double digit gradients become increasingly common, including one 300m stretch which averages a whopping 27.3%. With the effects of altitude also playing a part, only a handful of the top riders can complete the climb in under four hours.

With the event gaining in popularity by the year, the organisers have decided to implement a zero tolerance drug policy in 2014. Any rider with a history of doping will not be allowed to race and there will be random testing in addition to the mandatory testing of the first six riders across the line.