Back to news
news
Sportives and organised rides

620km "ultracycling marathon" returns next May after this year's revival...
by Simon_MacMichael

Organisers of Bordeaux-Paris, revived this year after a 12-year absence, have confirmed that It will return in 2015. Once one of cycling’s most prestigious races, with winners including Tom Simpson and Jacques Anquetil, it is now pitched as “an ultracycling marathon” and this year attracted nearly 1,000 participants.

First held 123 years ago – the winner of the debut edition was a Briton, George Pilkington – the final professional race was held in the late 1980s.

By then, the race saw competitors moto-paced behind a derny on the second half of the 620km route, a luxury not afforded to anyone signing up for next year’s edition, which takes place from 29-31 May.

As in this year’s edition, won by Marc Legrange in a time of 19 hours 52 minutes 49 seconds, three levels of entry are available, and discounts are available on each if booked before 2 February.

The Ultra Rando currently costs €160 and has to be completed in a time between 28 and 60 hours.

The Ultra Raid, which costs €210 and needs to be finished in less than 32 hours.

The Ultra 2 costs €230 and is a two-person relay; with the first leg takes 312km to Martizay, where the second rider takes over for the final 298km.

Entries can be made on the Bordeaux-Paris website, and organisers have produced an infographic showing some facts and figures from this year’s edition. 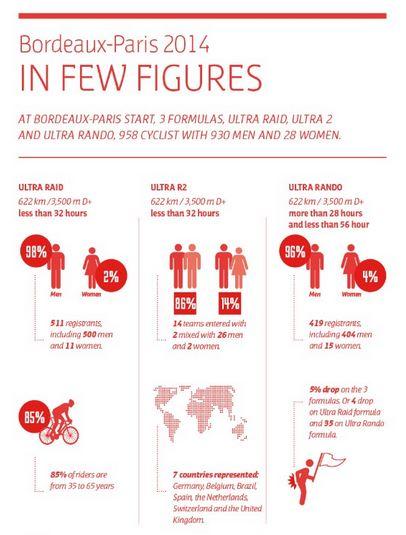