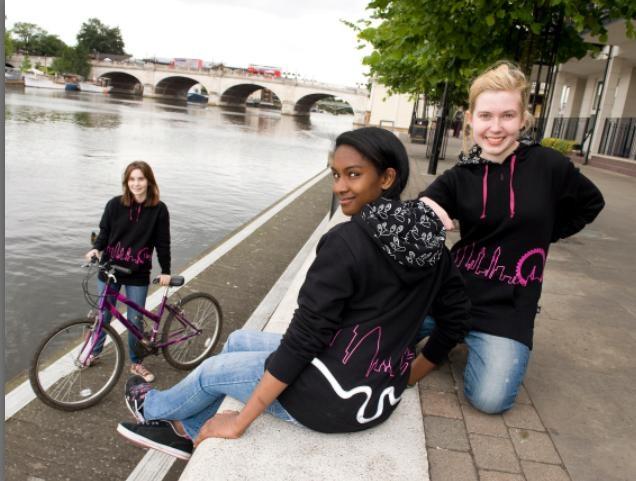 Pupils from two schools in Kingston-Upon-Thames have collaborated with cycling-focused fashion brand Ana Nichoola and the local council’s Road Safety and Environment Department to produce the BikeHood Hoodie, under a project to get more teenage girls riding bikes.

Anna Glowinski, head designer at Ana Nichoola, was brought in to work alongside eight students from Tiffin Girls School and Holy Cross School, both in Kingston, after the perception that “girls, cycling and fashion don’t mix” was identified as one of the main barriers preventing girls from cycling.

Glowinski, a competitive cyclist as well as a fashion designer, spent six months working with the girls, who were united in proclaiming the hoodie as the essential garment in their wardrobes, hence its choice as the item of clothing they worked on to make more bike-friendly, while keeping stylish as well.

The result is the BikeHood, made from organic cotton and available in black, with a pink line silhouette of the London skyline and a reflective strip in 3M Scotchlite that matches the curves of the River Thames as it flows through the capital, as well as reflective print inside the hood showing the BikeHood logo. It has a bike-friendly fit, with a longer cut in the sleeves and body.

The hoodie also has a front pouch pocket and a secret iPod pocket, the latter incorporated after some discussion about whether it might encourage unsafe cycling. In the end, after consulting with cycling instructors, it was decided to retain that feature, with the National Cycling Manual suggesting that riders try cycling while listening to music so they can discover just how important it is to look around while on their bikes.

Glowinski says, however, “I prefer that you just have one ear in, or simply wait until you’re walking around in your adaptable Hoodie.”

Some 300 hoodies were sourced from an ethical factory in Turkey, initially available only to residents of the borough, with girls of school age getting priority, the hoodies are now available on general sale at a price of £40, and can be ordered through the Ana Nichoola website.