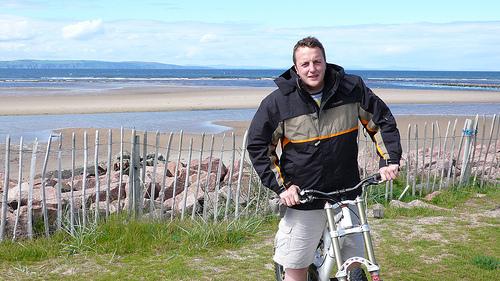 Triathlon man to cycle Siberia - and swim the Atlantic

A teacher from Peterborough attempting an 18-month global triathlon is to cycle across Russia in winter and swim the whole of the Atlantic.

Dan Martin is preparing for the start of the triathlon in Canada this May. He intends to raise £1m for orphanages across the world.

The first part of his journey will be the 3,600-mile swim. Although sharks, jellyfish and extreme cold are ahead of him, he will adopt English Channel swimming rules and wear just trunks and goggles – with a healthy dollop of Vaseline. This leg of the journey will see him swim eight hours a day for four months.

Once he makes land in Brest, France, he will cycle across Europe, through the tundra of Siberia and across the frozen Bering Straits before crossing into Alaska. He then intends to walk from Alaska to New York and take part in the 2011 New York Marathon as the final leg of his journey.

In order for him to survive the ocean, Dan will have to put on weight to increase his buoyancy.

With a 6ft 5in frame, he has already put on 7st 10lbs over the last year, currently weighing in at 21st, and he needs to be 24st by the time he sets off from his starting point in New York. By the time he returns, he will weigh just 13 stone.

He told the Peterborough Evening Telegraph: "I haven't really had a diet, I've just eaten whatever I like really.

"But I've had to get into some bad habits to ensure I can make the weight: I skip breakfast and snack a lot, as well as eating just before I go to bed. I eat seven meals a day at the moment. Swimming doesn't strain the joints as much as running and cycling though, and I'm obviously keeping fit. My heart and lungs are as healthy as anyone's."

Dan has previously completed two bike rides to Cape Town, in South Africa, first from London and then from Korea. Through these trips he has set up his own charity, The Dan Martin Foundation, which raises money for the orphanages he stops at along the way.

Dan still needs to raise £100,000 to cover the costs of the triathlon and would appreciate any corporate sponsorship. He's also looking for a road manager for the cycling leg of the journey. For more information visit www.danmartinextreme.com.