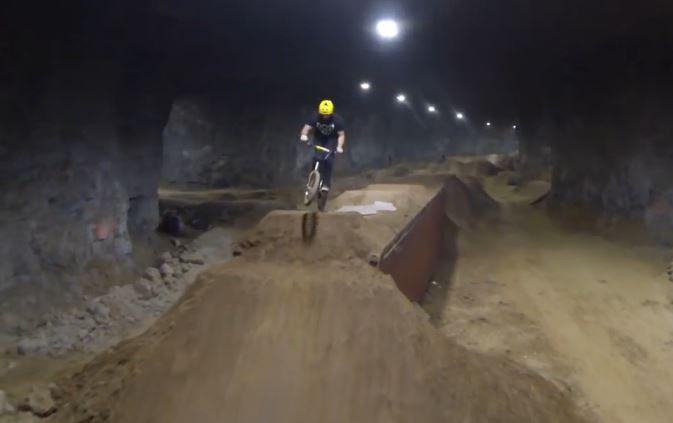 A disused mine in Louisville, Kentucky is now home to a spectacular bike park including BMX jumps and singletrack runs – all of it 100 feet underground. The Mega Underground Bike Park covers 320,000 square feet, and opens next month.

Opened in 1930 as the Louisville Crushed Stone Mine, limestone was quarried there until 1972. In 1989, Jim Lowry and his business partner bought the quarry and turned it into a high-security commercial storage facility, which continues to occupy part of the complex.

According to the website RoadsideAmerica.com, in 2009 they realised that they also had a potential visitor attraction on their hands.

Now, Mega Cavern offers adventure activities such as a network of ziplines, and people can also undertake an hour-long tour of some of the 17 miles of caverns.

Highlights include a nuclear war survival cave that was designed to house 50,000 troops from Fort Knox as well as the great and good of the state – including, according to a tour guide, Colonel Sanders of Kentucky Fried Chicken fame.

The latest addition, however, is the one that has got people in BMX and mountain bike circles talking – the Mega Underground Bike Park which, according to its website, has “over 45 trails, Jump Lines, Pump Tracks, Dual Slalom, BMX, Cross Country and Single Track,” with a “60 degree temperature year round.”

The owners say, “You simply won’t believe what you see,” but here’s a couple of videos to give a taster – while here, there’s a gallery of pictures of riders tackling the jumps on CX bikes.

In this video uploaded to YouTube last September, co-owner Lowry took WorldBikeParks.com on a tour of the cavern while the finishing touches were being put to the bike park.