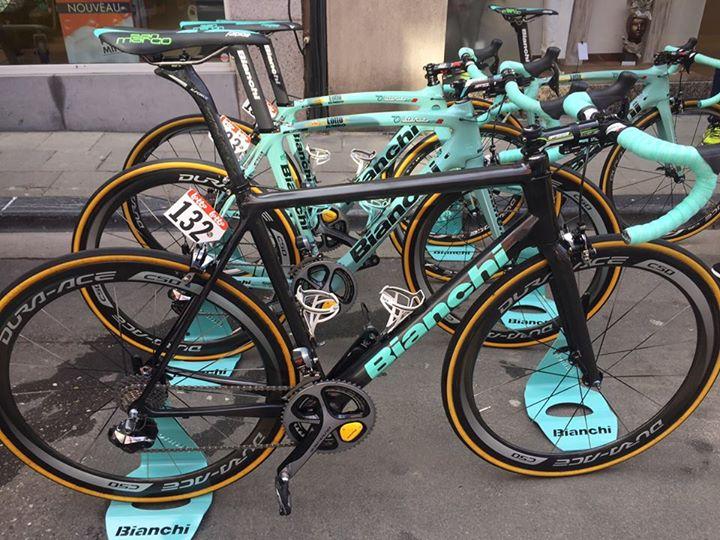 Something new anyway, and the UCI-approved list suggests it's a new look for an old name
by dave atkinson

What's this? A new Bianchi, looks like. Team Lotto NL-Jumbo posted this pic to their facebook page of the bike, bearing the number 132, which is Robert Gesink's number for the Flèche Wallone.

A quick peek at the UCI approved frames list suggests it's the new Bianchi Specialissima CV. Specialissima isn't a new name for Bianchi; Fausto Coppi could be found astride one as long ago as the 1950s. But this looks like a re-imagining of that classic steel race frame in carbon.

Gone (mostly) are the shaped tubes and flowing lines of the Oltre; you can see how different the bike looks compared to Tom Leezer's Oltre XR2 just behind. It's a pretty classic-looking diamond frame but up-to-date in terms of tech: the CV in the name refers to Bianchi's CounterVail technology which is a special layer within the carbon layup which Bianchi claim aids vibration damping to combat fatigue. We've tried a few of Bianchi's CV-equipped bikes and the experience has been very positive. Here's a helpful graph:

That's all we know for now, really. Although clearly that's no reason for us not to speculate. "It looks very traditional alongside the Oltre. Almost like a Legend or Parlee tube-to-tube design", says road.cc tech ed Dave Arthur. His suggestion is that the Specialissima will be going for light weight. Other road.cc tech ed Mat Brett is inclined to agree, "It looks like an ultra-light design: the shortest distance between two points is a straight line, after all".

The Specialissima also foregoes the aero seatpost; that, and the round-tubed design, means that the Oltre XR2 effectively becomes Bianchi's aero road platform. For all the talk of aero being the big thing these days it's interesting that bike manufacturers do seem to be moving away from it a bit, or at least offering more traditional alternatives. Trek did something similar with the Émonda.

When Bianchi let us know some more details of the new frame we'll be sure to pass them on to you.

1
Near Miss of the Day 433: Police tell cyclist “We all have to share the road” after very close pass from lorry driver
2
“No excuse” – councillor slams motorists who drove on pavement to get round road closure as emergency infrastructure ignored in London and beyond
3
Questions over Government’s commitment to active travel after "best and final offer" to repair Queensbury Tunnel
4
Some police forces treating close passes of cyclists as a "victimless crime"
5
Southampton MP complains of City Council "taking out lanes" – says pop-up cycle lanes worsen congestion
6
Fire service called out for DIY e-bike fire
7
Man arrested following Camden assault on cyclist (+ video)
8
Black teen on charity ride ‘grabbed from bike’ by Met police officer