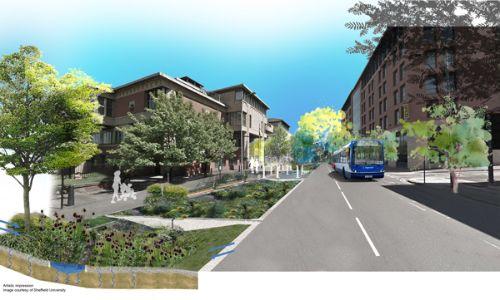 A decision on a £160,000 art work in Sheffield has been suspended after cyclists complained it would be better to spend the money on a cycle lane instead.

The project, Grey to Green, was supposed to narrow the route from West Bar to Castlegate to two lanes instead of four while showcasing public art with wildflowers, plants and grasses planted. but cyclists say the resulting shared use path is not sufficient.

Councillors say they were overwhelmed by messages of concern from cyclists, but argued that there was not a problem.

Coun Leigh Bramall, the council’s deputy leader, told The Star the amount of traffic that used the road was ‘very light’ and it would be ‘very cycleable’.

He added: “I think it is important that we give proper consideration to how we’re spending it, it’s about getting the best decision for the scheme.”

According to local planning documents, “the ‘Grey to Green’ scheme has grown out of proposals in the City Centre Masterplan update of 2013.

“It is a key step towards expanding the boundary of the city centre back to its historic origins around the River Don and Castlegate and it will also complement Sheffield’s bid for the location of the High Speed 2 station at the nearby former Victoria Station.

“Phase 1 of the project will focus on a half kilometre stretch between West Bar and Lady’s Bridge, including the Magistrate, Crown and Family Courts and the former Exchange Brewery.

One local cyclist, Graham Allsopp, said “The council still hasn’t grasped the scale of change that they need to put in place if they want to achieve their stated aim of 1o per cent of all journeys being made by bike in nine years.

As we recently reported, Matt Turner, Chair of Cycle Sheffield said: “According to the plans you'll have a choice between riding on the busy but narrowed road with buses and taxis or riding on a shared used path where lots of people are walking. We know people don't like walking along and worrying that there's a bike behind them; what we need is a separate cycle path.

“We don’t think that this is a good use of the money,” says Turner. “We only have a few days to make our voices heard before the decision is made.”

Cycle Sheffield is asking people to contact their local councillors, asking them to challenge the decision.