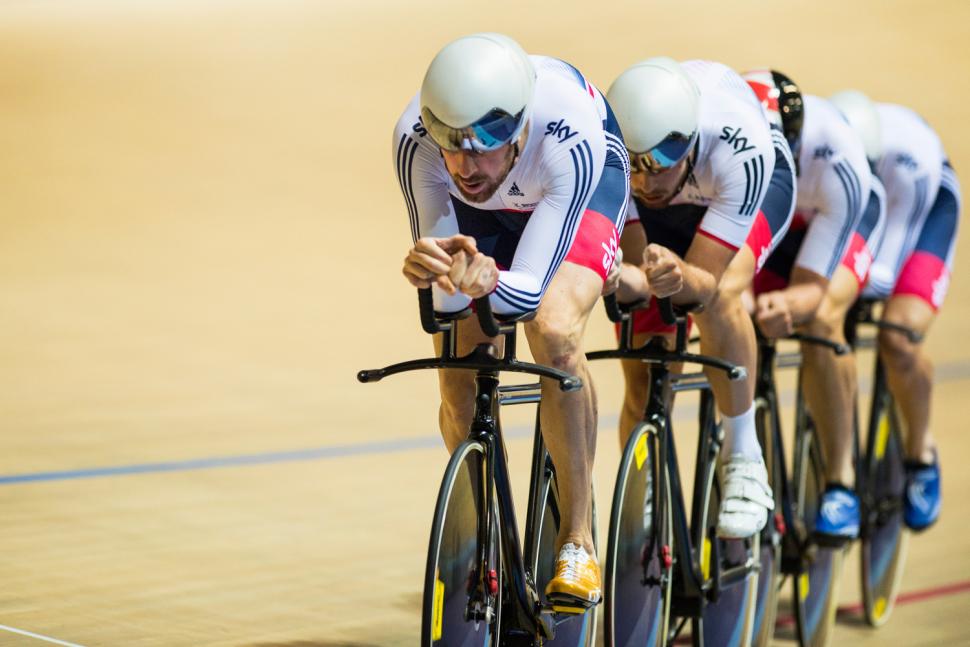 Sir Bradley Wiggins has staked a claim to finish his career with a tilt at a fifth Olympic gold medal by leading Great Britain to a blisteringly fast team pursuit time at the Revolution Series in Derby on Friday evening.

The time of 3 minutes 54. 974 seconds would have been good enough to secure the bronze medal at London 2012, where Team GB set the current World Record of 3 minutes 51.659 seconds.

Two of the riders who won Olympic gold three years ago alongside Peter Kennaugh and Geraint Thomas were in the line-up tonight, Steven Burke and Ed Clancy.

In Beijing in 2008, Burke took bronze behind Wiggins in the individual pursuit, ridden for the last time at an Olympic Games and before the rule change that now permits just one rider per country in individual events.

Like Doull, he now rides for Team Wiggins, set up by the 2012 Tour de France champion to form the nucleus of the riders pushing for a place in endurance events at Rio next year, including Andy Tennant who was in the squad at London 2012 but missed out on a medal since he didn’t ride in any of the rounds.

Clancy, meanwhile, who rode alongside Wiggins to win the team pursuit in Beijing and besides gold in the same event in London also took bronze in the Omnium, remains at Tennant’s former team, JLT Condor.

There are two aspects of tonight’s ride that make it particularly striking.

First is the time of year; it’s unusual to say the least to see track racing in the Northern Hemisphere in mid-August, with the season typically getting going in the autumn.

Secondly, there’s the fact it took place in Derby – unlike a venue such as the Lee Valley VeloPark where the velodrome was built for an Olympic Games with a fast track to match, it’s a regional multisports facility not designed to host top-flight events such as World Championships.

As a result last night’s ride by Wiggins – who in June set a new UICI Hour Record in London – and his team mates suggests that Team GB will not easily relinquish their Olympic crown in Rio next year.

A star-studded field including Mark Cavendish is chasing Olympic qualification points in Derby this weekend as the 2015/16 Revolution Series gets under way – and limited tickets are still available for the remaining sessions here.