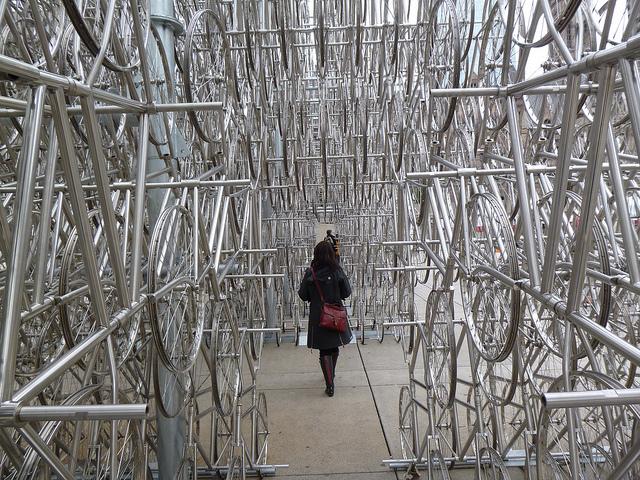 Forever installation will be outside Gherkin skyscraper during September
by Simon_MacMichael

Thousands of bicycles will next month appear in front of the City of London’s Gherkin skyscraper, together forming a sculpture, Forever, by the acclaimed Chinese artist Ai Weiwei.

The artwork, named after a well-known brand of bicycle that China's workers aspired to in the days before cars became accessible to the middle classes as the country’s economy opened up, is the latest in a series under the same name that first appeared in 2003.

Since then, Ai has installed variations on the theme at locations including the Brooklyn Museum in New York, the Venice Architectural Biennale and in Toronto, Canada – the latter featuring more than 3,000 of the steel-framed bikes.

The latest work will be located outside 30 St Mary Axe – to give the Gherkin its correct name – from 3-14 September as part of the Corporation of London’s Sculpture in the City season. Its installation coincides with a major exhibition by the artist at the Royal Academy.

A smaller version of Forever was on show in London in 2013 at Marylebone’s Lisson Gallery, which said at the time:

Ai’s groupings of stainless-steel bikes – here configured in different modular shapes and layers of geometrically stacked structures – refer to the famous ‘Forever’ brand of bicycles that have been mass-manufactured in Shanghai since 1940.

Once ubiquitous, this classic marque and indeed the perceived profusion of pushbikes on Beijing streets are now steadily dying out, to be replaced by smog-emitting cars on clogged highways and six-lane ring roads.

Here’s Ai himself speaking about the work in an interview conducted while he was under house arrest in China.

Ai Wei Wei's Forever Bicycles-In His Own Words from Garry B on Vimeo.

You can see more pictures of the Toronto installation here, while the following video shows it being put together.