Cervélo’s S5 has long laid claim to being one of the fastest aero road bikes. It was launched in 2011, at a time when aero road bikes were really in their infancy. Fast forward to 2015 and the Canadian bike brand has redesigned the S5. It’s now a much better looking bike, but more important than that are the claims that it's a faster and better handling version of the original. 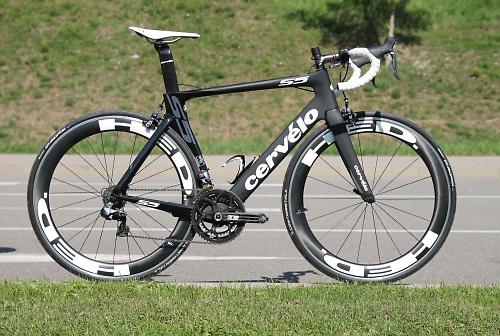 I took to the silky smooth roads around Germany recently and found the new S5 to provide hugely accessible speed, with a noticeable improvement in the handling department. But really this bike is all about speed, and in that department, it doesn't fail to deliver. I didn't need a cycle computer to tell me how fast I was going, the pure sensations were enough. It's an easier bike to ride fast than the old one, less compromise in the way it handles.

That the S5 would be fast was never really in doubt. The frame and fork have been shaped in the wind tunnel and the deep section wheels only add to the sensation of unbridled speed. There are a lot of changes with the new S5 to get out of the way first. For a start, it looks a lot different. Some say better. I tend to agree; the previous S5 wasn’t the best looking bike, the new S5 is easier on the eye. 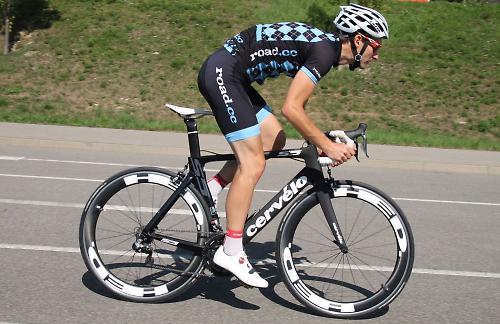 The headline figures for the less subjective changes to the new bike include a 21.3 watt drag reduction at 40kph, a 35% stiffer head tube, 17% stiffer fork and 6% stiffer bottom bracket, while maintaining the same weight as the previous version. Not only has the company redesigned the frame and fork, it has developed its own aero handlebar. According to the company’s claims, the carbon aero handlebar is good for a 4.4 watt drag reduction compared to a conventional handlebar, a big part of the near 22 watt aero improvement. 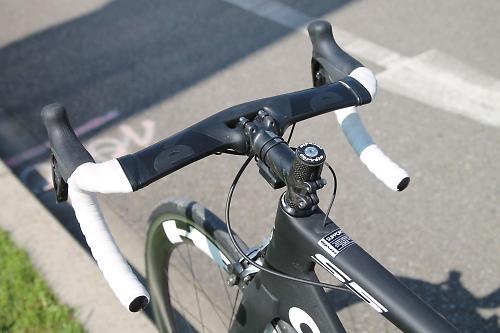 It’s interesting that as bike brands have continued to develop their aero road bikes, that they've also started looking elsewhere on the bike improvements. This has led to the likes of Trek, Canyon and Specialized developing similar aero handlebars as well. 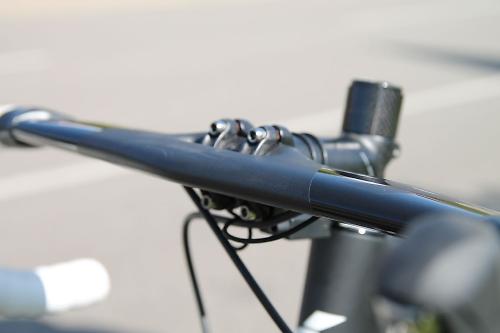 Why? It’s all about reducing the frontal surface area, so the entire bike slices through the air more cleanly. Tricky to determine this improvement in real-world riding though. Riding in the drops or on the hoods, and it feels like any other handlebar. It’s a nice shape and the drops have a comfortable bend. The top section isn’t really intended for using, though you can of course rest your hands on them. 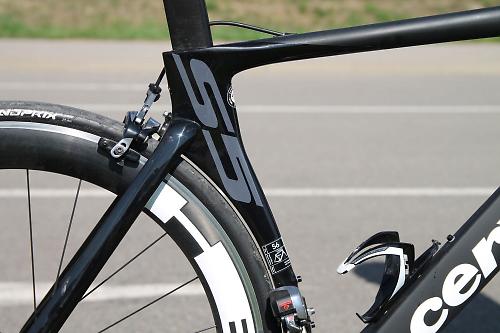 Other small, but no less important changes to the new S5 include a compartment in the down tube to house a Di2 battery, and future-proofed internal cable routing so it’ll take any new groupset that might be launched in the future. Of more importance however, and applicable to any cyclist with an interest in wider tyres, is the news that the S5 has been designed with wider rims and tyres in mind, up to 25mm. The latest aerodynamic experts in the bike industry seem to (currently) agree that wider rims and tyres are more efficient, and bike manufacturers have been responding with frames and forks better designed to accommodate the extra girth. 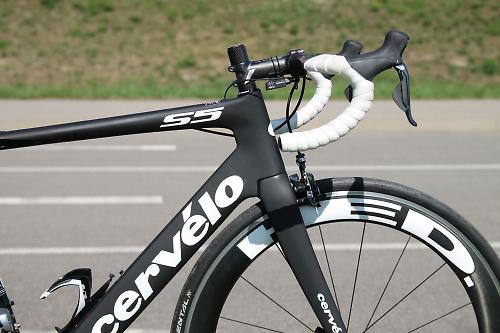 The geometry is unchanged, save for a 15mm lower stack height on the 56cm, due to the short head tube, placing you in a lower, more aerodynamic position. Fine provided your back can deal with it, but you wouldn’t ride an aero road bike if you couldn’t ride in a reasonably aggressive position, especially since it’s the cyclist that accounts for as much as 80% of the wind resistance.

How does it ride?

All those little changes add up to a big difference. The most noticeable improvement is how good the handling is. It feels faster, tauter and more responsive. The quest for speed with aero road bikes can lead to compromise: incredibly fast in a straight line, but not great through the corners. The S5 however feels like a really good road bike, much like the R5 in fact, when it’s pushed and pulled through corners. It’s clear the changes to the frameset, particularly at the front with the new fork and stiffer/shorter head tube, has increased how tight and direct the new bike feels. 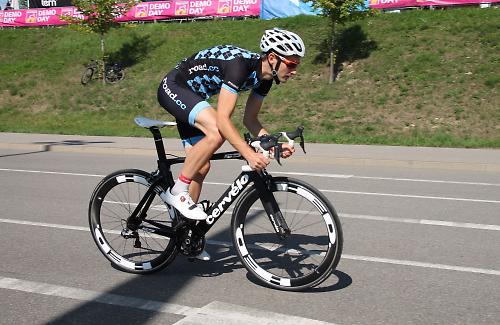 I'd like to talk about the ride comfort, but to be honest the test roads were so silky smooth and the saddle time too limited to really reach a verdict here. Hopefully a test ride on UK roads is on the cards so that aspect can be thoroughly tested. 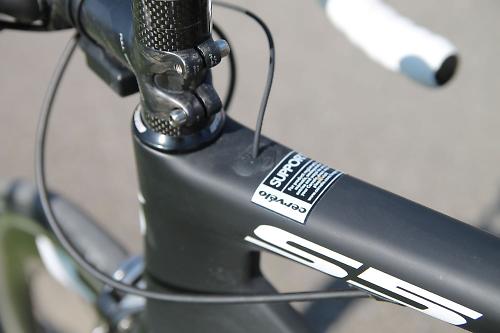 The original S5 has long been considered the benchmark aero road bike, and based on this short first ride, it seems like it's a position the new bike isn't going to give up easily. There’s a lot more competition in this market though, with several new bikes from Trek, Canyon and Specialized launched this year, that will certainly push the new S5 very hard indeed. I can feel a grouptest coming on here. 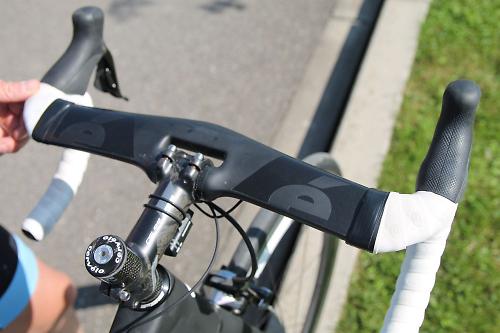 One thing is for sure, aero road bikes are maturing fast, with improved aero efficiency and less tradeoff in handling and all-round performance. More time is needed to thoroughly assess the new S5, but based on this first ride, it’s clear the updated bike is an improvement on the previous version.

That's all very good, but how much does it cost?​

The new Cervélo S5 is available in three builds, and there’s a frameset (£3,499) option as well. The range starts off with a Shimano Ultegra model, rises to Shimano Dura-Ace, and tops out with Dura-Ace Di2. 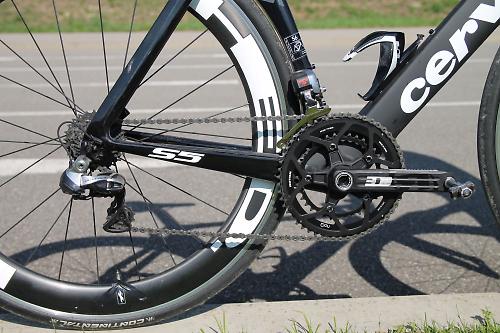 That’s the bike I rode, and it also comes with HED Jet 6 Plus SCT wheels with Continental Grand Prix 23mm tyres, and finished with a Rotor 3D+ BBright™ 52/36 chainset. And FSA OS-99 CSI stem clamps the Cervélo Carbon Aero handlebar in place, and a Fizik Antares saddle finishes the build. This build costs £ 7,299.00. Yes, it’s not cheap. 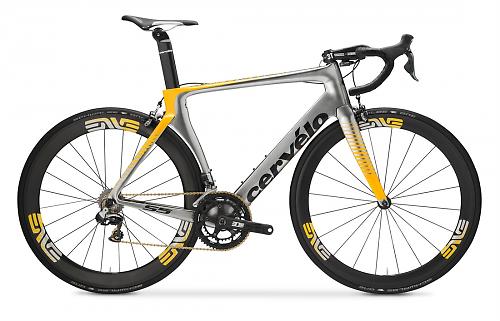