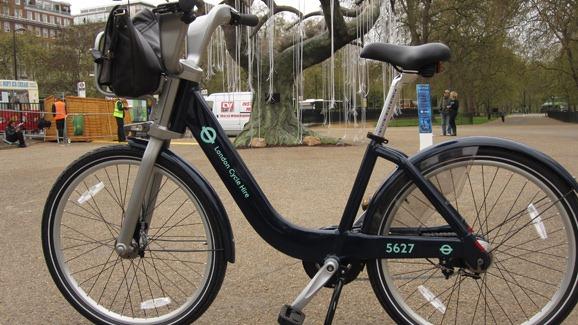 Andreas of London Cyclist gets the invitation from Transport for London to try out the distinctive new public rental bike for Central London.

Transport for London (TfL)  on its website describes it as a public bicycle sharing scheme for short journeys in and around central London. You'll be able to pick up a bicycle, use it as you like, then drop it off, ready for the next person.

Despite Paris's hire bikes being as raffishly elegant as you would expect, three years of experience has certainly exposed some weaknesses, not least that the bikes themselves have been vandalised and stolen to the extent that a complete restock of the entire fleet has been necessary over the period.

So it was this issue in particular that Andreas was keen to address even before he rode off,"What security features will there be?" and the answer is simple and pragmatic.

In essence, you pay for the bike using your credit card just like in a car park. You use the bike - with your first half hour free - and return it by locking it back in the nearest hire dock to your destination. If you don't lock it properly, a simpler operation, according to Andreas, compared to the Paris scheme, the clock keeps running and ultimately you get a £300 charge. Yikes! An ample incentive to keep an eye on the bike, lock it with your own lock if you leave it and finally return it properly.

The vandalism issue appears to have been addressed by fairing-in all or at least most of the attachment bolts and the seatpost is designed to adjust but not remove.

Although Andreas found the bike heavy, he was able to take advantage of central London's more-or-less flat terrain to catch an innocent bike courier unawares, "I switch to the third gear and pedal as fast as I can. I overtake. I’m sure the messenger was very bemused to see a big chunky cycle hire bike overtake him. I’m also sure, that if he realised I was racing him, he would of beaten me by a mile!"

Andreas concludes,"The bike is generally very comfortable and easy to ride after the first few minutes of getting used to it. You are in the upright position which gives you a clear view of the traffic. The chunky wheels mean it can handle potholes and a tiny bit of off-road action."

Maintenance will be handled by the crew who drive around a fleet of - allegedly electric - vehicles which balance the stock of hire bikes at the 400 docking stations. According to TfL, with all the docking stations in Zone 1, you'll never be more than 300 metres away from your nearest.

Of course, referring to our earlier story, there's an app for that!

1
Win! £1,500+ worth of Pacenti carbon wheels, alloy wheels and cycling caps with multiple prizes to be won
2
Low traffic neighbourhoods in London are not mainly introduced in more affluent areas, researchers find
3
Devon cyclists to be given helmet cameras to help catch dangerous drivers
4
"Too ridiculous": Cyclist reports motorist for driving on the pavement... and is threatened with fine for 'cycling on the footpath'
5
Cyclist fined after submitting dangerous driving video to police
6
Bath golf club set to be transformed into bike park
7
'Incredibly talented' police officer killed after being hit by motorist while cycling
8
Cycle campaign group urge people not to cycle over safety fears