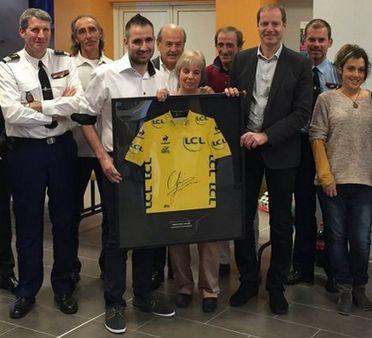 A gendarme who spent a month in a coma after being hit by a motorbike while he was on security detail at the Tour de France is looking forward to getting back to work after completing his recovery from his injuries – and he has also been given a framed yellow jersey signed by Chris Froome.

Corporal Jérôme Cotto was struck by a motorcycle being ridden by a member of the Republican Guard – also a branch of the Gendarmerie – on 15 July during Stage 10 of the race from Tarbes to La Pierre St Martin, reports France Bleu.

He spent a month in a coma in hospital in Pau, then in September was moved to a rehabilitation centre in Bagnères-de-Bigorre where he learned to walk and talk again.

When he emerged from his coma in mid-August, Corporal Cotto said he could recall taking up position on the route of the race but nothing afterwards. He also said that while he was in the coma, he dreamt about his childhood.

“It took me a while to realise I hadn't seen August, or late July,” he said. “Seeing me friends from the Gendarmerie and my family is restoring my confidence, Now, when I'm at the hospital I feel like a visitor, not a patient.”

Before the crash, Corporal Cotto passed his exams to become a senior non-commissioned officer and is now keen to return to training. In the meantime, he is playing sport every day.