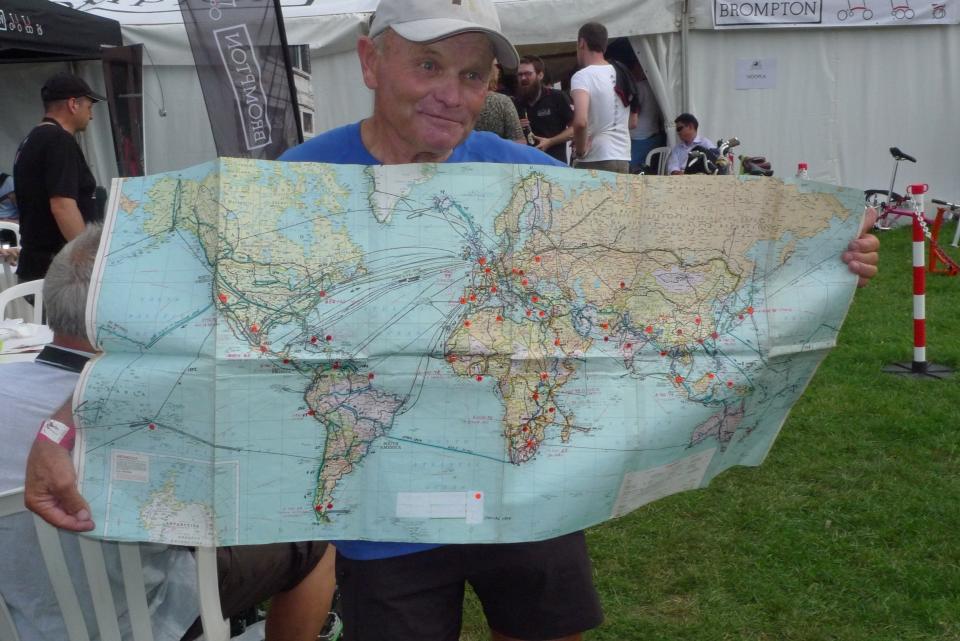 Man cycles for 50 years around the world, writes book

Heinz Stücke, now 75, set off in 1962 on a remarkable, 'unending' and record breaking adventure...
by Laura Laker

A man who spent 50 years cycling around the world has returned home and written a book about his adventures.

Stücke’s book, Home is Elsewhere: 50 Years Around the World by Bike, is a collection of just some of his 18,000 pages of diaries of an adventure that just kept being extended until it became, in Stücke’s words, "unending".

In a short documentary about Stücke’s adventure, he says: “I had a rough idea about the places I most wanted to see but I happily kept postponing the return again and again. In the end the journey became unending because I found the way of life I enjoy and what is better than to follow a life which is fulfilment, and the journey is my fulfilment.”

“It’s the bike that makes it possible. The bike is my passport.”

He says: “Either you have a goal in life, or you are just crazy. To have something to be proud of, something that is worth a life. Leave my mark through my writings, my pictures, my things.”

The Brompton carried Stücke across some unlikely terrain, including, as he describes it, "the icy plains of Canada".

Brompton Bicycle CEO, Will Butler-Adams, says: "Great adventurers are rare; driven by a pure desire to explore people and places.

"Heinz is such a man who spent fifty years circumnavigating our planet, at a speed with time to absorb the nature of the land he travelled through. His Brompton helped him in the latter years to reach the unreachable and fulfil his dream. His story needed to be told to inspire others to embrace the simple joys of travelling by bike. We are honoured to have been part of the team that have brought this incredible story to life!"

Home is Elsewhere: 50 years around the world by bike, is available to buy through Brompton.com or from the Design Museum shop during the Cycle Revolution exhibition.

A museum is being created in Stücke’s home town Hövelhof, to house some of his memorabilia.