Demo kit, shiny new bikes, a bit of riding & pizza - that'll be a road.cc club ride then...
by Stu Kerton

The weather held off for last Friday's team road.cc rideout which saw us and a bunch of our readers heading out into the country lanes around Bath for a social bike ride. That's after we'd all had our fill of coffee and cake, had a gander around the latest models from Cannondale and for some, getting togged up in an X-Bionic outfit.

We've done a few rideouts from our HQ now but we certainly upped the anti with this one. Judging by the size of the turnout you thought so too.

We all like a bit of shiny kit right? With that in mind we thought we'd lay on a bit of a demo day to kick things off. It was also a great chance for you to see some of the stuff kicking about in the office ready for testing and reviewing. The guys from Cannondale had turned up with a big van stocked full of their latest models for the riders to get up close and personal with. Supersix Evo's, CAAD12 Disc's and the brand new Slate, a gravel/adventure road bike rolling on 650b wheels and with a 30mm travel Lefty suspension fork. Bruce Dalton, Brand Manager at Kinesis also popped out for the ride showcasing the Racelight 4S and Aithien, each in their new disc brake format. 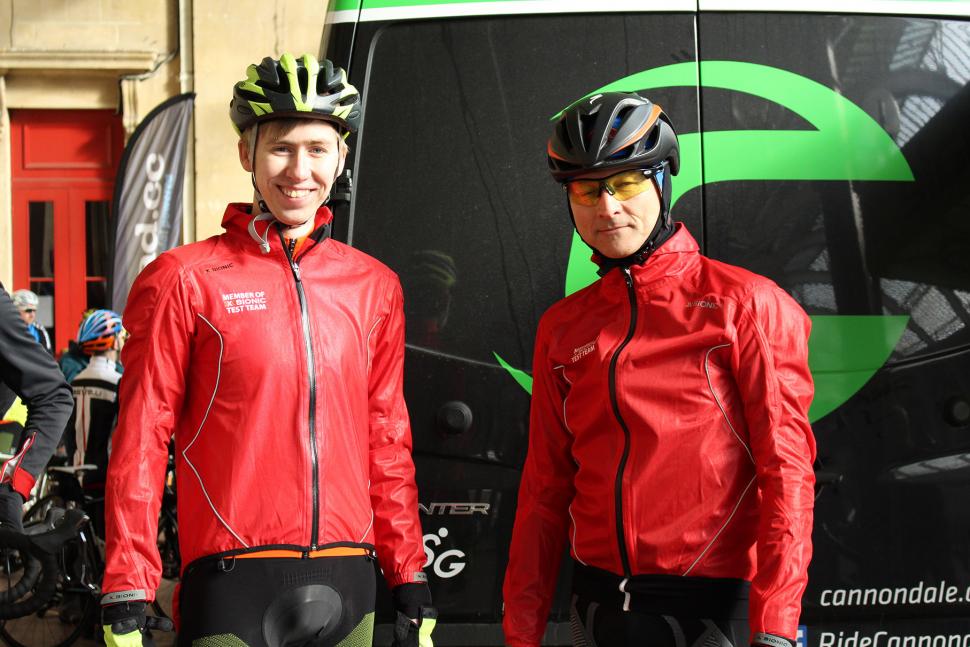 Ten of the riders also had the chance to do some product testing for clothing brand X-Bionic. The brand that likes to push a garment's technical boundaries had a kit list for each rider including bibshorts, warmers, jersey and jacket worth well north of five hundred quid. They even got a free polo shirt for their troubles. 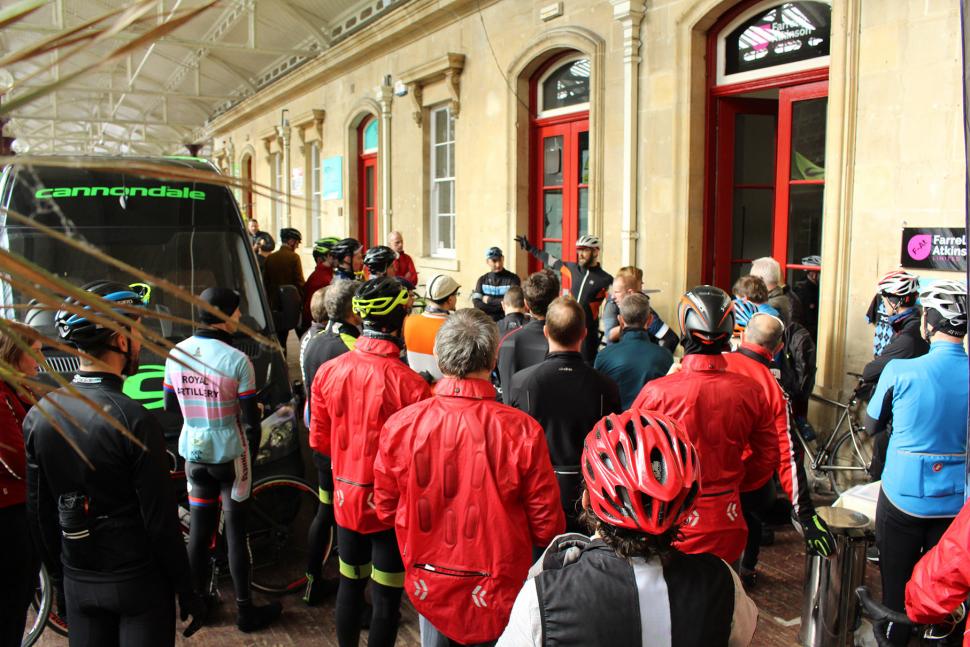 While all this was going on the kettle was taking a battering as were the choccie biccies. Fuelled up and rider briefing done our two groups headed off out of the city.

Both groups headed off towards Bristol on the cycle path which was pleasantly quiet thanks to the time of day, about 2pm so everyone else was at work or school. The longer group exiting first as they headed of towards the Mendips.

After eight miles on the path it was time for the short group to rejoin the traffic albeit only briefly as after a quick stretch on the A420 we were into the country lanes heading north-east towards Dyrham and the only serious climb of the day, Sands Hill, a real leg tester and lung buster for those of us not blessed with a climbers physique. 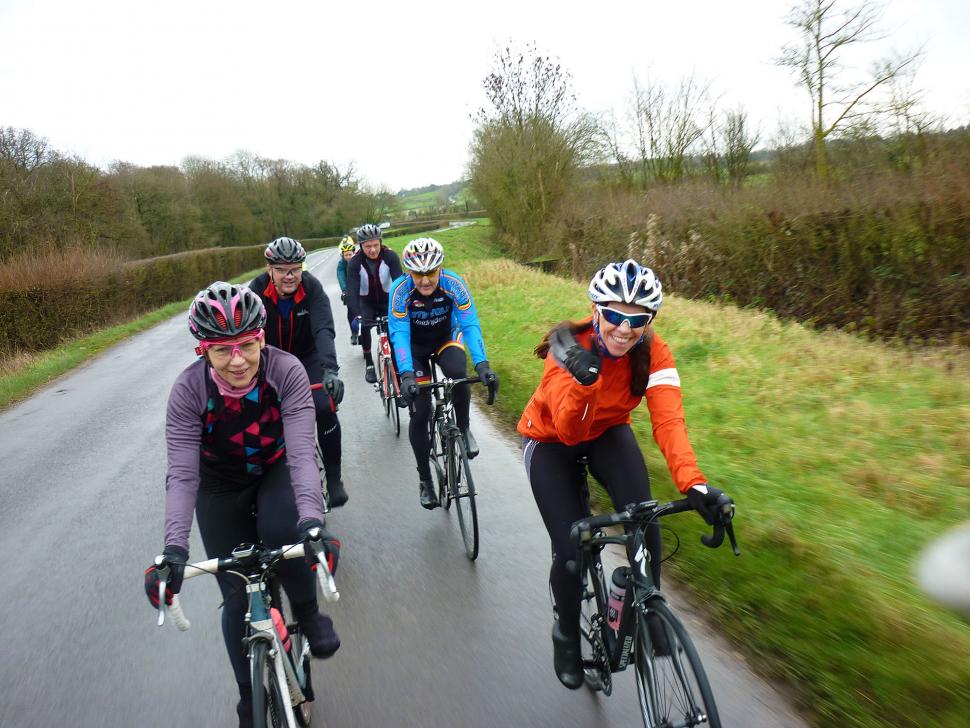 A bigger challenge was to come though, crossing the A46 - at least everyone got a rest as the stream of traffic thundered by.

Back into the lanes then and it was time to head for home with a quick regroup after the descent into Batheaston before tackling the rush hour city traffic.

A good half an hour later the long group arrived after they'd racked up an extra ten miles skirting the Mendips and Chew Valley Lake taking in plenty of lumps and bumps along the way.

No matter which route had been tackled there was plenty of hungry riders to feed and water.

The benefit of getting a few miles in is being able to refuel on some naughty treats and the snacks on offer back at the HQ certainly didn't disappoint. Next to the water, coffee and cakes were boxes of freshly delivered pizza, chilled lagers and a couple bottles of wine. It's certainly one way to get the electrolytes and carbohydrates back into the body. 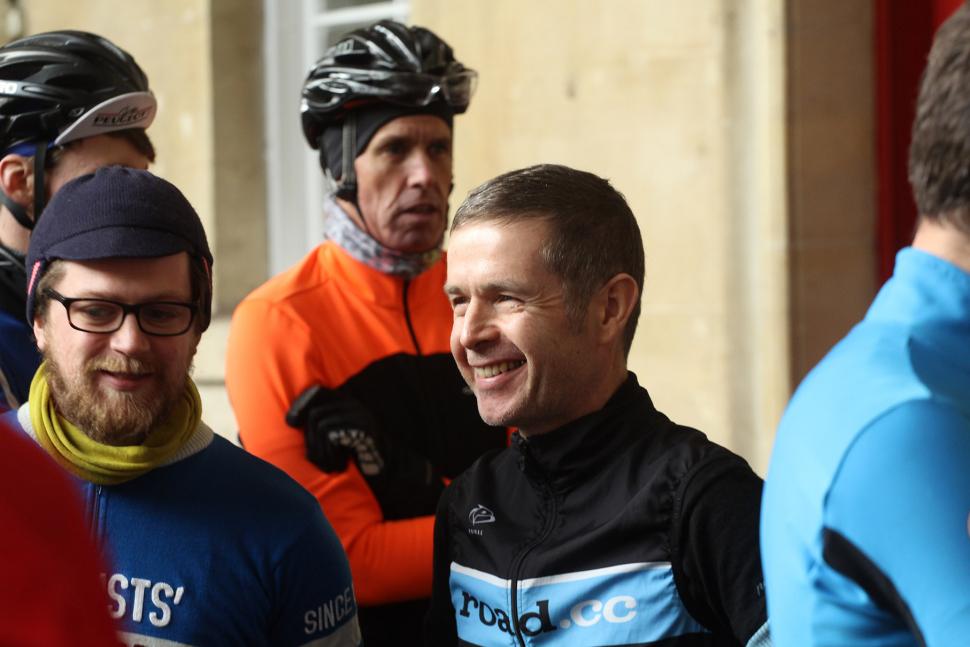 Overall we at road.cc had a great afternoon meeting our readers and we hope all of you that turned up enjoyed yourselves.

See you all again soon.