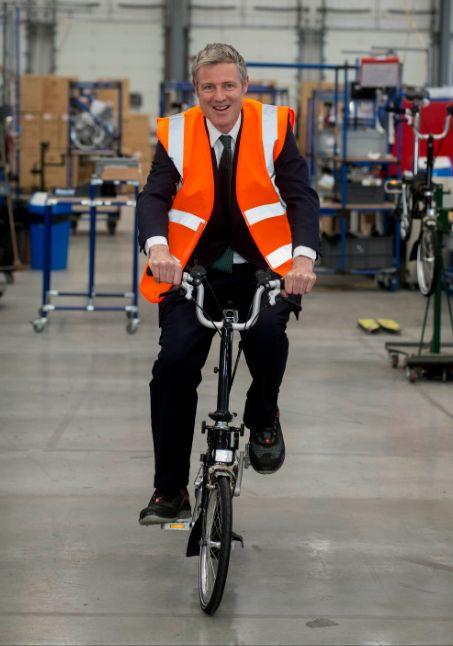 Zac Goldsmith, the Conservative candidate to be the next mayor of London, has told a public meeting that he is being “positively hounded by cycle campaigners” over segregated cycle routes. The comment was made on the same day he launched his cycling policies – which one leading blogger believes are not enough “to swing the cycling vote.”

At a public meeting at Richmond Town Hall last night, Goldsmith outlined his position on a range of issues ahead of May’s election to an audience including local resident Tim Lennon, who lives in the Tory MP's Richmond Park and North Kingston constituency.

In an open letter to Goldsmith afterwards, Lennon said he attended it “because I wanted to hear about your policy on cycling.”

In a question to the candidate at the meeting, he quoted outgoing mayor Boris Johnson’s recent comment that “knowing what I do now, we would have blasted ahead with our new segregated cycle lanes from the beginning.”

Goldsmith replied that much needed to be done to support cycling in the capital.

He mentioned that could include segregated infrastructure, but Lennon – who took some positives from the meeting such as Goldsmith’s desire to reduce the number of lorries on the city’s streets – believes the politician is “struggling” with the issue of protected lanes.

Quoting Goldsmith, he wrote: “When I think back, all I hear is: ‘I’m positively hounded by cycle campaigners who just seem to be about one thing, and you’re either with them or against them’.”

> Zac Goldsmith accused of being the "anti-cycling" London mayor candidate

Lennon, in his capacity as borough co-ordinator for London Cycling Campaign/Richmond Cycling Campaign told road.cc today: “Over two years ago Zac surveyed his constituents about cycling, and had two big public meetings.

"We told him, and the public told him, that if you want to encourage more cycling then you need to make it safe, and make it feel safe.

"Over Twitter and at these events – as well as at a Richmond Park meeting – Zac has said the right words about encouraging cycling, but never committed to the changes, like the East West Superhighways, that will make a real difference to cycling, either in his constituency or in London.

“Indeed, last night, his neighbouring MP boasted about how he and Zac had made sure Kingston got 30 minutes’ free parking in the centre.”

He added: "I believe Zac wants to encourage more people to cycle, but I don't believe he really understands what needs to happen for this, and I'm worried that he thinks that more proof and research is needed to actually demonstrate the value and importance of proper space for cycling in our city."

The main focus of Goldsmith’s pledges for cycling, unveiled yesterday, was on cycle hire schemes. Here they are.

As part of his Action Plan for Greater London, Zac will:

Zac will guarantee that Boris Bikes can be hired quickly and easily with Oyster Cards and Contactless payments from 2017, when Serco’s current contract ends.

2. Back a Metropolitan Boris Bike Scheme to bring cycling to the outer boroughs

Zac will consult on creating new regional Metropolitan Boris Bike schemes around the capital, helping Londoners cycle between neighbouring town centres such as Richmond, Kingston and Barnes; or Stratford to Walthamstow. Zac will also look to expand the outer reaches of the Central Cycle hire scheme, including to Greenwich.

3. Immediately roll out the Brompton Bikes hire scheme to four Outer London Boroughs to help London’s commuters get out of their cars and onto their bikes in the most cost-effective way possible

4. Improve cycle safety across the capital

Zac will take forward TfL’s programme to overhaul London’s 33 most dangerous junctions, investigate the next set of priority road improvements and support boroughs that choose to limit speeds on their roads. He will also take lorries off London’s roads through the use of freight consolidation centres and pursing a river first policy. And he will take action to ensure that HGVs are not a danger to cyclists.

Danny Williams, a member of the mayor’s Roads Task Force and last year named by the Evening Standard as one of the 15 most influential people when it came to transport in the capital, wrote on his Cyclists in the City blog that “Cycling should be a vote winner for him [Goldsmith] but he's really failing to impress so far.”

Referring to the Tory candidate’s cycling policies, Williams noted: “He says he'll "protect TfL's investment budget". He very specifically does NOT say he will protect the hard-fought for 10 year cycling budget (of which we have only seen the first year's investment).”

Williams, who admitted he is “not a natural Sadiq Khan supporter,” added: “Zac Goldsmith is making it really hard for me to vote for him, unless he massively changes his tune on cycling and commits to proper continuation of the cycling investment plan.

“There's still time for Zac Goldsmith to win the cycling vote. But he needs to show he takes cycling seriously. He hasn't done that yet, I'm afraid.”

The current mayor too has been “positively hounded,” to use Goldsmith’s words, on the issue of cycling infrastructure such as segregated routes, but from a rather different quarter.

In November last year, Johnson told the London Assembly that his ‘Cycling Revolution’ was “provoking the most incredible backlash.”

“And every time they do, I get prouder and prouder of what we’re doing, it’s the right way forward for our great city.”

His words elicited admiration from the Green Party’s Baroness Jenny Jones, who said she admired him for standing up to his opponents to push through the new infrastructure.

> Boris's commitment to cycling wins him an unlikely fan

Johnson urged his successor, whoever it may be, to continue with his programme, but so far Goldsmith seems to be failing to convince campaigners that he is the candidate best able to do that.