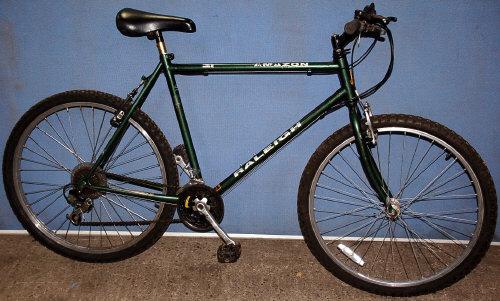 Cyclist Nicholas Phillips, had his bike security marked with BikeRegister, but didn't hold out much hope of seeing it again...
by Laura Laker

A man was surprised when his stolen bike was returned to him, even though he hadn’t reported it stolen.

Nicholas Phillips, who lives on a canal boat in Bath, had locked the bike to his boat one evening before going to sleep, and awoke the following morning to find it was gone.

Phillips, who had purchased the Raleigh Amazon mountain bike from a second-hand bike shop, didn’t believe he stood much chance of seeing it again, so he didn’t bother reporting it. However, he did register it under the national cycle database, BikeRegister, and an officer from British Transport Police (BTP) recovered it and traced it back to him.

PC James Lucas, of BTP, said: “When I marked the bike in 2015 Mr Phillips was really happy to have his bike marked, and of having the reassurance that if his bike was stolen we would do our best to get it back to him.”

“Bikeregister is a great tool and has proven today that if you steal a bike it is traceable. Without BikeRegister there is no way Mr Phillips would have not got his bike back, as we would have had no way of knowing who it belonged to.”

“Having police access to the website and the owner’s details 24/7 is brilliant. It means we can quickly inform BikeRegister and the owner that the bike has been found."

In the three weeks Phillips' bike was missing he bought a replacement, which was again registered with BikeRegister. He decided to donate his old bike to a local homelessness project, Julian House.

For more information, and to register your bike, visit www.bikeregister.com.