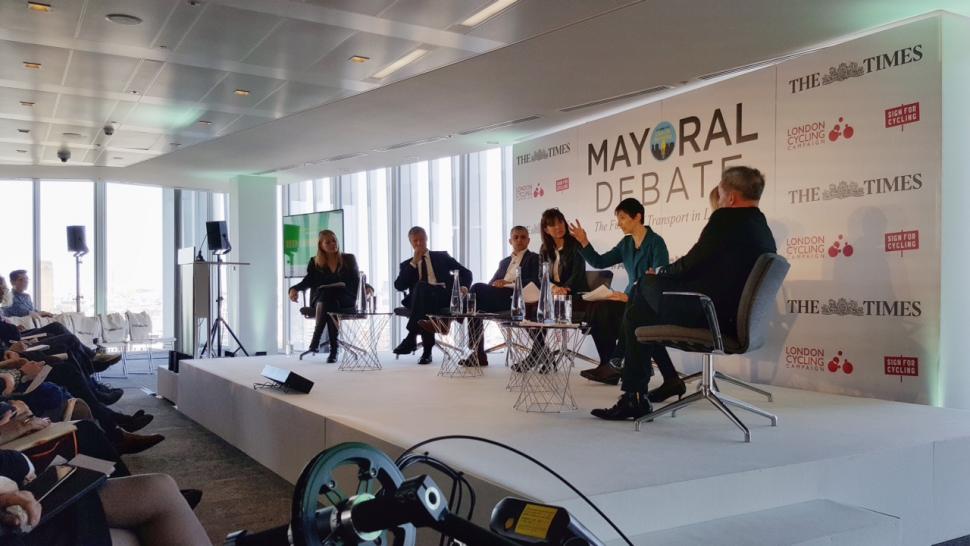 LCC and The Times hosted this morning's hustings...
by Laura Laker

Candidates in next Thursday’s London mayoral elections today debated how they would increase levels of cycling in the city, with next week’s poll set to determine whether the momentum in building cycling infrastructure created by outgoing mayor Boris Johnson will continue.

The debate came just days after Khan, the frontrunner in the opinion polls, and Goldsmith, his closest rival, pledged to support the LCC’s Sign for Cycling campaign.

Investment in infrastructure featured heavily, along with how to tackle dangerous levels of air pollution in the capital.

Berry has pledged to spend £15 billion on cycling over 10 years. She said: “I think cycling is the key to making transport work in the city, it is the most efficient use of precious road space. We must get to the hierarchy that puts cycling and walking first, then public transport then private vehicles.”

She added that funding for cycling must be increased. “We’re at the peak of the superhighway funding and we must keep it going at that level ; £1.5 billion – that’s 15% of the TfL budget.”

Berry said there is a business case for clean air – in that companies will want to invest in a healthy city.

Congratulating LCC, Goldsmith, who last month complained that he was being “positively hounded by cycling campaigners,” said that if he were elected he would have to keep his promises to stop the letters from its members.

The Richmond Park & North Kingston MP said: “Boris has made it his mission to get London on two wheels I don’t think there has been any politician that has been more committed to cycling.

“I will invest in safe, segregated superhighways wherever possible. I will work with communities and trial lanes with temporary planters [where there’s controversy].”

Berry said Goldsmith would need to find extra money to keep cycling funding at the same as the current ‘peak’ level as Central London funding will be cut in coming years, a point Goldsmith refuted.

He said that while in cases such as Vauxhall where community concerns about congestion caused by road space being given over to cycling infrastructure turned out to be unfounded, community consultation is vital.

He said the consultation process in London’s Cycle Superhighway scheme had been “blunt and arrogant at times”.

“Consultation can’t just be a box ticking exercise, it has to be meaningful,” he said.

Khan, who is MP for Tooting, reiterated that he would “make London a byword for cycling, with a global reputation on a par with Amsterdam, Copenhagen or Berlin.”

He called cleaning up the air a “moral imperative.” He said: “In a city where 10,000 people each year are dying because of air pollution the environmental and health benefits are clear, it is also a matter of economic sustainability; the tube and the bus network can’t take the strain as the city continues to grow, cycling should be not just an easy but obvious choice.”

Khan said he would “bring forward” the Ultra Low Emissions Zone. He said ensuring London contracts are only given to companies using direct vision lorries means cleaner lorries could be demanded, too.

When asked how he would fund cycling schemes with a projected £1.9 billion loss from freezing fares Khan listed a number of efficiencies he would make in TfL, including consolidating engineering departments between departments responsible for Overground and Underground trains, which he called “flabby”.

Pidgeon, a London Assembly member since 2008 and former chair of its transport committee, said: “I’m proud to have been the first Mayoral candidate to support the LCC’s Sign for Cycling campaign; I’m fully committed to the three main requirements.

“We need to reduce lorry movements wherever possible with use of consolidation centres and moving spoils by the Thames. We must take action to prohibit lorries at peak times of the day”, she added, a move she believes could be “transformational”.

Pidgeon reiterated her commitment to smart roads charging for motorists and a workplace parking levy. “We have got to reduce the number of vehicles on the roads,” she said. She also proposed bulk buying electric taxis to cut cost, and leasing them to taxi drivers, similar to a scheme in New York, to reduce diesel pollution from London’s cab fleet.

All candidates aside from Walker and Whittle said they would appoint a cycling commissioner, Khan and Berry wanted a cycling and walking commissioner as one role. Khan, Pidgeon and Berry agreed on the need for a London-wide default 20mph speed limit to improve road safety.

Pidgeon said: “I would appoint a cycling commissioner; the difference it has made having Andrew Gilligan snaping at the heels of TfL’s officers has been huge.”

The LCC’s Chief Executive, Ashok Sinha, closed the debate with a plea to candidates to show leadership on cycling, should they be elected.

“There will be opposition,” he said, “but it is worth it – hang in there.”